Hungary Designer Has a Little Dreidel (and a Menorah) 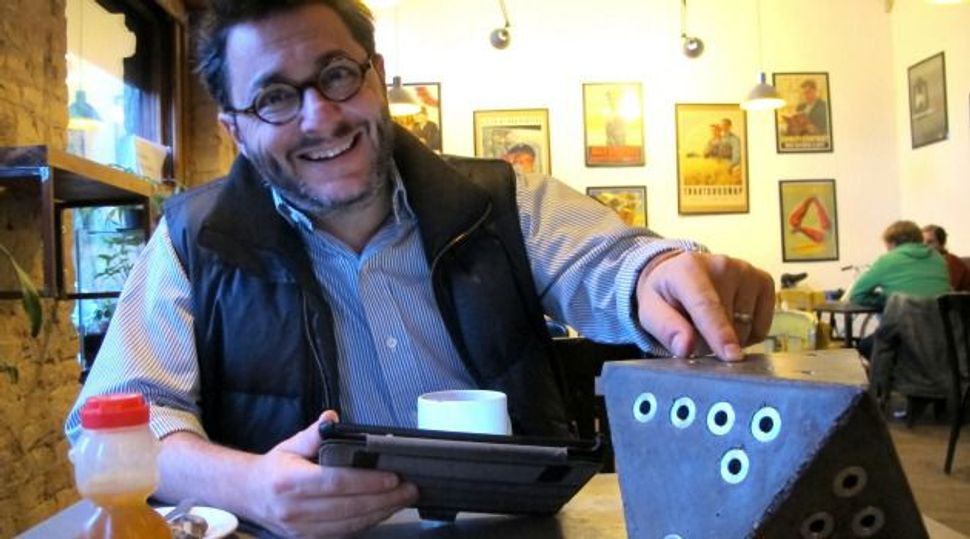 And on the Eighth Day, He Made This Menorah: Andras Daranyi demonstrates one of his start-up company?s holiday designs. Image by Ruth Ellen Gruber

Andras Daranyi reached across the table in one of the trendy cafes in Budapest’s old downtown Jewish district and fondly patted an unusual-looking object about the size of a bowling ball. Made of dark-gray concrete, the object had eight sides, each an equilateral triangle. Each triangle was perforated by an arrangement of between two and nine uniform round holes edged in metal.

It looked like nothing I had ever seen before, but the holes could have been a give-away: The heavy, sharply angled object was a menorah.

It is, in fact, the first product of the EightDays Design Group, a startup co-founded by Daranyi. Its aim, he said, is to “reinterpret objects of the traditional Jewish liturgy from the perspectives of progressive design.”

“We haven’t decided if it’s an art project or whether we want to sell our pieces,” Daranyi said. “But we’ve already been contacted by some collectors in Australia and Switzerland who want to buy the menorah, and the Applied Arts Museum in Budapest has bought one for its design collection.”

A dark-haired man with Harry Potterish glasses, Daranyi, who is in his early 40s, served as the director of Budapest’s Holocaust Memorial Center from 2002 to 2005 and is now a media consultant for the political opposition to Prime Minister Viktor Orban’s conservative government.

We spoke not long after he returned from London, where the menorah had been presented as part of the official Hungarian stand at the huge London Design Festival.

“It is the first Hungarian Judaica to be exhibited at this high-end design festival,” Daranyi said. “People who visited the stand from the Far East said that the menorah was a Zen object. They loved it, but they didn’t have a clue about Judaism or Hanukkah.”

The EightDays project grew out of Daranyi’s own personal quest — both for a menorah and, more broadly, to consolidate his own identity as a progressive Hungarian Jew.

“I always wanted a really nice Hanukkah menorah and spent years and years searching,” he told me. “My wife finally got fed up, and for my 40th birthday she got a jewelry designer friend to make a beautiful menorah out of wood and silver. I had never seen a menorah made out of wood before.”

Soon Daranyi enlisted his wife, the jewelry designer and another friend to join forces to create a menorah that would be even more different. “We met every two weeks over a working breakfast. It was a tiny workshop on Hanukkah,” he said. “We asked ourselves: Why are Hanukkah menorahs usually static, with all the candles in a row?”

Their idea, he said, was to make each day of Hanukkah special by honoring it with its own separate candleholder that would still be an integral part of a whole.

“After a few months we found the right shape — an octahedron,” he said. “An octahedron has eight sides, each shaped like a triangle. We found one axis, around which all the other sides can be rotated. At the end points of this axis is where we put the holes for the shammas [the candle that lights the other candles].”

He demonstrated how the sides of the menorah each bore the hole for the shammas, plus holes for the other candles, arranged in order so that by rotating the menorah from one night to the next, the side with the correct number of candle holes would be on top.

The menorah can also double as Sabbath candlesticks, if it is positioned with the side with two holes on top. The design even includes a touch of Kabbalah: Each of the menorah’s sides measures exactly 18 — “chai” — centimeters.

Daranyi said he did not know of any other contemporary Hungarian Judaica designers. “It’s a cultural issue,” he said. “You have to be very safely Jewish to do this, and I think I’m safely Jewish, even though I live in Hungary.”

Hungary has an estimated Jewish population of 100,000 or more, though the vast majority are unaffiliated and have little or no involvement with organized Jewish life. Like many Hungarian Jews of his generation, Daranyi made aliyah in 1990, after the fall of communism. But, like most of them, he returned to Hungary after a few years.

“I lived in Israel for four years and did my army service,” he said. “I thought I had gone to Israel forever, but I came back. Israel is a real country, not an idealistic dream.”

These days, Daranyi and his team are beginning to think of designs for other Judaica items, such as a Seder plate and a mezuza. And they recently added another element to what Daranyi called their “Hanukkah package.” This is a much smaller octahedron, made from DuPont’s ceramiclike Corian, that duplicates the shape of the menorah but does not have candle holes. Instead, it pulls apart to form two identical, pyramid-shaped dreidels.

I found them a bit too heavy to get spinning, but Daranyi didn’t seem to have a problem. Still, he conceded, the design team may have to experiment to find the proper material and balance.

Hungary Designer Has a Little Dreidel (and a Menorah)