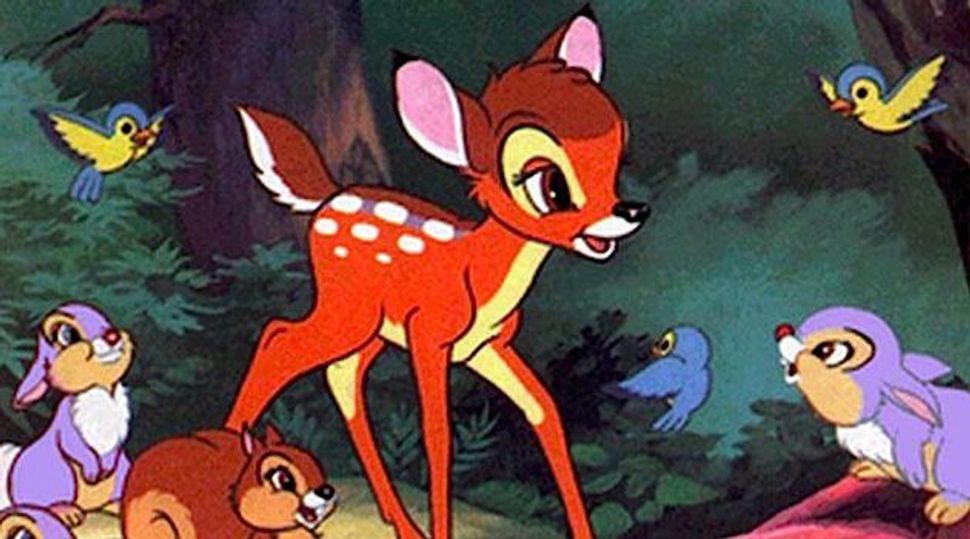 All Creatures Great and Small: In the Haggadah, deer hunts have been said to refer to anti-Semitism. Image by Disney

What could be more Jewish than an animated, doe-eyed fawn gallivanting around the forest with pals Thumper the hare and Flower the skunk? The question may sound ridiculous, but it becomes more serious when you consider the release date of the film “Bambi” — August 13, 1942. And then there are the hunters and forest fires that threaten the white-tailed deer, and the Zionist identitification of Felix Salten, who wrote the book that inspired the movie.

Cervine and elaphine metaphors abound in medieval art — where stags’ cruciform antlers symbolize Jesus Christ, and illustrated hare and deer hunts in Haggadot refer, in part, to anti-Semitism — and in the Bible, where deer (Naphtali’s tribal symbol) take on sexual (Song of Songs), spiritual (Psalms and Proverbs), and messianic (Isaiah) implications. Speaking last month at the Chicago Humanities Festival, Paul Reitter, a German professor from Ohio State, asserted that Bambi’s hunters were at least partial stand-ins for anti-Semitic persecution in Salten’s 1923 book, “Bambi. Eine Lebensgeschichte aus dem Walde.” (The author sold the movie rights for $1,000 in 1933 to Sidney Franklin, who in turn sold them to Disney.)

In an essay published in Tablet, David Rakoff referred to Salten as an assimilated Jew, although he allowed that the writer’s “Jewish consciousness was not entirely dormant” and that his “lingering vestigial Jewishness did not go unnoticed in ‘Bambi.’” But Reitter, it seems, has done a much better job on his Salten homework. 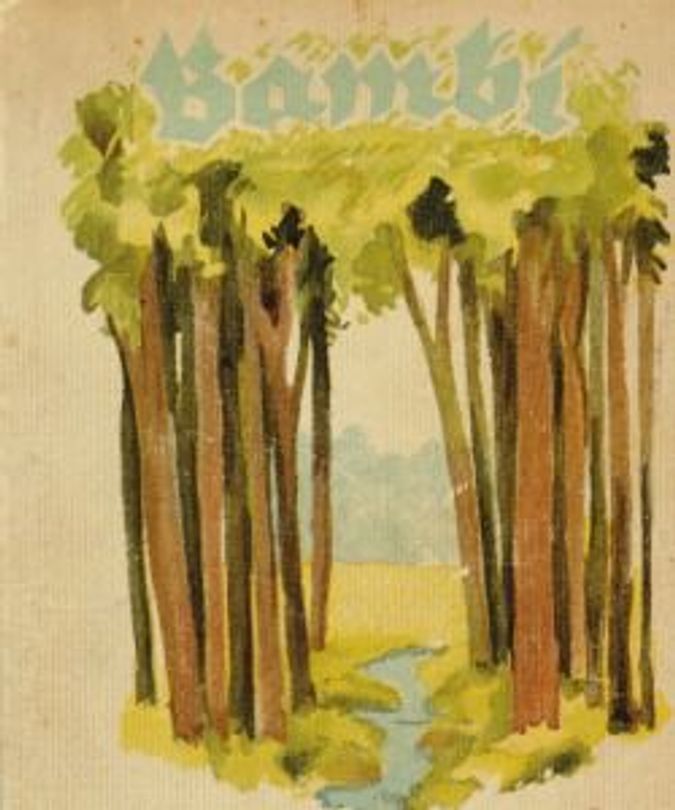 “Inspired by Herzl’s message of self-acceptance… Salten became an effective critic of the attempt to hide or disown Jewish heritage. He was also concerned about the menace of anti-Semitism,” Reitter said. Salten also wrote on the importance of theater for Jewish self-awareness, and his obituary for Herzl viewed the latter’s Zionism as his playwriting’s “fifth act.” Finally, Reitter noted, Salten — after speaking a second time at a Bar Kochba event — traveled to Palestine in 1924 and wrote a “largely admiring” book detailing those travels.

Although Salten wrote his Palestine book shortly after publishing “Bambi,” scholars shouldn’t have ignored the question of whether the two are connected, according to Reitter. In fact, some have even sought to make much flimsier connections between Salten’s pornographic work, “Josefine Mutzenbacher,” and “Bambi,” calling Salten a “deer sodomite.”

Austrian Jewish writer Karl Kraus noticed “Jewish dialect” in the hares of “Bambi” and suggested they “perhaps [were] using mimicry as a defense against persecution.” And a 1945 letter to the editor of The Saturday Evening Post by Alfred Werner, who was the associate editor of the Chicago Jewish Forum, about Salten’s death described the fox of “Bambi” as the “Hitler of the forest” and compared the animal to Joseph Goebbels.

Citing Kafka scholar Iris Bruce, Reitter focused on some of the deer’s conversations in Salten’s “Bambi.” (The book is quite different from the film; “Disney, he kind of goyified the animals,” Reitter told the Forward.) One asks whether humans and deer can coexist, and wonders, “Will they ever stop persecuting us?” A colleague supports the possibility of “reconciliation,” while a more experienced deer says it’s impossible. Hunters kill two assimilationist deer, while the third, Bambi’s cousin, Gobo, submits to humans because he is too weak to flee. He is later killed despite his belief that his domestication will be his salvation.

Better than piling up examples of Zionist tropes embedded in “Bambi,” Reitter said that Bambi’s encounter with the elks provided a more useful topic for discussion. While the male deer are “princes,” the elk are “kings,” and Bambi is intimidated by the regal animals, which, Reitter notes, “haven’t been cowed by persecution and its attendant anxieties.” In the mating calls of the elk, Bambi has an aesthetic experience that, Reitter said, mirrors Salten’s belief that creativity could make “objective Judaism” more understandable. Salten used the same expression, “Ur-power,” when referring to the elks’ call and to the artistic expression that would liberate Zionism.

Writing nearly 45 years after Salten’s death, Roger Ebert noted in the Chicago Sun-Times that the death of Bambi’s mom is one of the “movie moments that provide a rite of passage for children of a certain age: You send them in as kids, and they come out as sadder and wiser preteen-agers.” One might add that they also come out with — if they are sad and wise enough to search for it — a better understanding of the German Jewish experience.