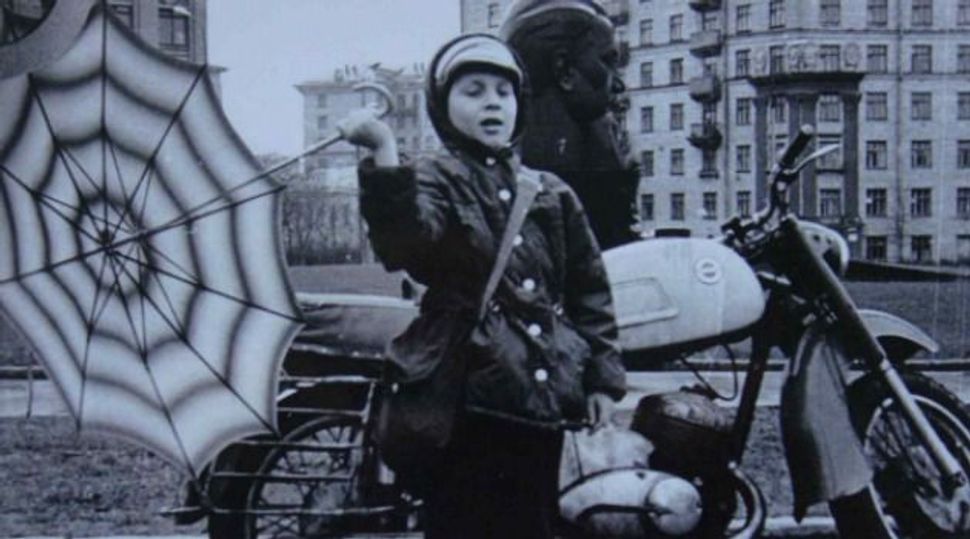 Rainy Day in Moscow: The author Maxim D. Shrayer circa 1976 in Moscow at Kurchatov Square. Image by David Shrayer-Petrov

Once, during a literature lesson in sixth or seventh grade, in around 1981, a note was passed to me from the back of the classroom. It was a sheet of paper ripped from a composition book. “To the Jew from the Russians” (“evreiu ot russkikh”) was scribbled in Russian on the front of the folded sheet. Inside was a short message: “You Shrayer Juboy son of a beach.” Nothing too creative, except the spelling. The note was signed by two of my classmates, Fedya M. and Fedya K. (I’ve changed the names). The freckle-faced Fedya M. and I used to live in the same apartment building. Downhill skiing was his main passion in middle school. The other author, Fedya K., was raised by a single mother. He was a talented cartoonist who spent most of the class time drawing and doodling. I hadn’t had any confrontations with the first Fedya, and I rather liked the other one; from neither of the two Fedyas had I been expecting virulence.

Let’s back up. In September 1974, I had started first grade in School No. 34, situated in the northwest corner of Moscow, a short walk from the high bank of the Moskva River. The sign on the front entrance referred to our school as a “specialized school with some subjects taught in English.” By the time I was starting first grade, winds of the Cold War and forces of stagnation had reduced the “subjects” to four or five weekly lessons of English and the occasional forays into the literature, culture and geography of the English-speaking countries. Nevertheless, the “specialized” language schools continued to carry prestige in the days of my Soviet childhood, and to get into these schools, one usually had to take an entrance examination. For 10 years, Monday through Saturday, I went to school with about 30 boys and girls. Among the students in my year, the bearer of the name “Maxim Davidovich Shrayer” was and remained the only one officially registered and listed as evrei, Jew.

One of the collective amusements was to rummage through the class roster. The pupils would crowd somewhere in the corner; one kid would be positioned on the lookout for the teachers, and the names would be recited alongside the nationalities and grades. This is how I learned the official ethnic make-up of our class. Of some 30 pupils, between 22 and 24 were listed as “Russian.” This included a girl with an Armenian last name, a boy with a Tatar last name and a girl with a German last name; her father must have been Jewish. Between four and six kids were designated “Ukrainian.” And one (myself) was a “Jew.” Was it my Jewish luck to have ended up in a class with no other kids who identified — or whom others identified — as Jews?

When I was in sixth or seventh grade, I took a music appreciation class at the school. Our teacher, Ms. V., named the titles of individual vignettes in Mussorgsky’s “Pictures at an Exhibition.” Then, in turn, she played them on the phonograph. “This next piece,” Ms. V. said, “is called ‘Two Jews.’ It represents —.” Before she had the chance to finish her sentence, half of my classmates exploded with the ugliest of laughs. Mostly boys, but also a few girls, laughed hysterically at the teacher’s mere mention of the word “Jew.” To many of my classmates, the word “Jew” — not even the derogatory zhid, but the normative “Jew” — had the ring of something insulting, dirty and laughable. “Two Jews, two Jews,” several kids kept repeating as they slashed me with their eyes. This humiliation, through which I sat frozen and pretending that it wasn’t affecting me personally, continued as the teacher stood and observed us. Ms. V. finally clapped her hands, restoring order and extinguishing the cascades of savage laugher. It’s almost impossible to talk about these things without self-pity or pathos.

I have met ex-Soviet Jews my age who experienced little or no anti-Semitism from their classmates: no racial slurs, baiting or other expressions of prejudice. As a result, they may remember the school years with fondness, while I look back at mine with acrimony. Despite being what they call a “popular kid,” I was alone. Through 10 years of contact with my classmates, I never felt that I was one of them, never felt accepted as one of their own. With my peers from the last Soviet generation I shared a lack of illusions about the road to communism. In common we had our Brezhnev jokes, our hunger for things Western. I shared with them our generation’s heroic narratives — the central one being the war, where our grandparents had shed blood and defeated Nazism. For 10 years we wore almost identically abominable school uniforms: sackcloth gray in grade school, and later, navy with pewter buttons for the boys and burnt-umber orphanage dresses with pinafores for the girls.

With my classmates I had in common our unsentimental education at summer camps for the Young Pioneers. We knew the names of each other’s parents and siblings, attended each other’s birthday parties. We acted in the same school plays (in an anti-colonial drama we staged in seventh grade, I played, in makeup, a black African among all whites). I admired the same early Soviet rock groups — Time Machine, Aquarium — that my classmates did. What I didn’t have in common with them was my Jewishness.

One of the most liberating moments in my life was my Soviet high school graduation ceremony, in June 1984. After the official part had ended, after the conifer-green diplomas had been handed to the graduates, after the prom, I finally walked out of the school building. Feeling rapturous, I ran out of the half-open wrought-iron gate toward the empty morning street, which was lined with poplars shedding fluff. I was free, at last, of the school and of my classmates. By the time my parents and I were finally allowed to emigrate from the USSR, in the spring of 1987, I had had no contacts with my classmates for nearly three years. We left Moscow on June 7. After a summer of transit in Austria and Italy, we arrived in the United States at the end of August 1987 to settle in New England. I became an American undergraduate, later a graduate student. Years went by. When I visited Moscow — a former refusenik, now a foreigner with a passport from the United States — I had no wish to look up my former schoolmates. They were like smoke over a dumping ground of memory.

Life itself added a postscript to this story. In March 2004, I received the first in a slew of emails from my former classmates. One of the emails contained a save-the-date; plans for a class reunion were already under way. The invitation had stirred up what I thought had been buried in the past. Already after the 20th reunion I had not attended, a former classmate sent me a report, replete with a class photo of those in attendance. How much we had all changed, boys and girls pushing 40! The photos moved me more than words.

Two more months went by, and I unexpectedly heard from Fedya K. My strongest memories of Fedya K. were those of his grandfather, a handsome old gentleman with Alpine-white hair; of his hilarious cartoons, and of the note “To the Jew from the Russians,” which Fedya K. had co-written and sent me in middle school. In his email, Fedya K. wrote that he had read some of my poems and that he was sorry I couldn’t be at the reunion. He had become a successful lawyer and had a 14-year-old daughter. In my reply I wrote this to Fedya K.: “… For twenty years I hadn’t sought contacts with former classmates, because the school years had been very traumatic for me. You probably no longer remember, but I was baited and taunted, especially in middle school. This was difficult.… When I visit Russia, I run across people who pretend that none of this ever was: anti-Semitism, persecution, ostracism. Please understand, it’s hard for me to get over all this stuff, so strong are the memories….” In a flight of weak-heartedness, I didn’t say anything about the wretched note.

Fedya K. replied immediately: “What’s with you? Can you really imagine that your nationality makes any difference to me?! From childhood I was raised… with deep respect for people. I was never, even in childhood, when many things pass without us being conscious of them, permitted to place anybody beneath me, and especially on the basis of ‘skin color.’ Among my present acquaintances there isn’t a single person who would allow himself any sort of vile display of nationalism.”

I have every reason to believe Fedya K. was sincere. The adult Fedya K. was being himself when he wrote the letter. Had he, then, forgotten and moved on? Was it I, then, who was still living in the past? Fedya K. and some of our other former classmates must have the liberty not to remember. But I cannot unremember.