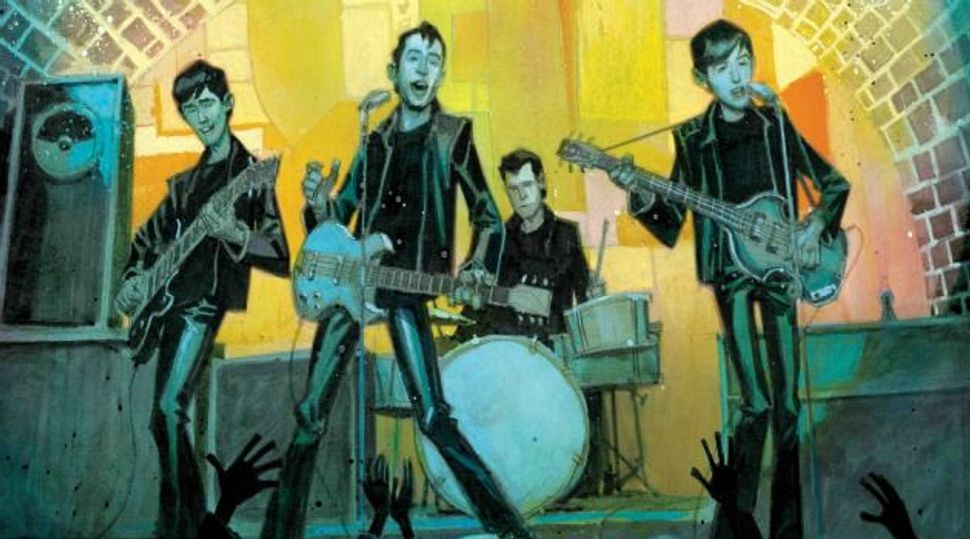 For the Benefit of Mr. Epstein: In the 1960s in the UK, Jewish businessmen were not particularly common in the entertainment business. Image by DARK HORSE

In his 1964 autobiography, written three years before he died, at the age of 32, Beatles manager Brian Epstein recalled feeling the weight of his lineage as he sought a balance between the wishes of his Orthodox Jewish parents and the aspects of his life that were increasingly incongruent with their traditional values.

“I am an elder son — a hallowed position in a Jewish family — and a lot was expected of me,” wrote Epstein, who died of an accidental overdose of the sleep aid Carbrital. By then, Epstein’s unadulterated love for the music of John Lennon, Paul McCartney, George Harrison and Ringo Starr had propelled the group to international status. Yet, despite the massive impact Epstein’s efforts had on contemporary culture, Epstein himself remains something of an enigma.

This is in part because little has been written about Epstein, personally, aside from the broad brushstrokes. He was born in 1934 on Yom Kippur, into a wealthy family in Liverpool, the son of Malka and Harry Epstein. Ever nattily dressed, quaintly formal in social situations, Epstein managed his family’s North End Music Stores, the site of the infamous moment when a customer first inquired about a record featuring “The Beats.”

In writing “The Fifth Beatle,” a graphic novel about Epstein’s life, author Vivek Tiwary sought to cast aside that mythos to create a more intimate portrait of Epstein. “It was the human side to Brian that I knew nothing about when I first began my research,” said Tiwary, a Broadway producer who for more than 20 years has been studying Epstein and interviewing people who knew him. “The heart of it is that he was gay, Jewish and from Liverpool, which in the 1960s were three significant obstacles.”

Tiwary, a first-generation American of Indian origin, calls “The Fifth Beatle” his “life’s work.” As a “brown kid” on Broadway, where there aren’t many people of his ethnicity, he says he found Epstein’s story deeply inspiring.

Illustrated by Andrew Robinson, “The Fifth Beatle” highlights those obstacles, contrasting the Epstein who was both a good Jewish boy, who minded the family business and was a brilliant entertainment entrepreneur, with the Epstein who was a lonely misfit who self-medicated to quell his tremendous inner turmoil about being gay during a time when homosexuality was a felony in his native England. Toward the start of the book, Robinson and Tiwary render a true-to-life event: a murky black-and-white scene in which Epstein, looking for companionship at the docks, is beaten by a sailor. Liverpool, while an important port town and strategic shipping destination, was culturally barren and intensely homophobic.

Tiwary said the threat of such intolerance has, over the years, rendered Epstein’s inner circle tight-lipped. “During Brian’s lifetime, if they would talk about their friend’s personal life, it could have gotten them thrown in jail,” Tiwary said. “It’s only within the past five to 10 years that they have been willing to talk about Brian. They realize that talking about his homosexuality today is not going to immediately elicit these negative associations that it might have 20 years ago.”

Although Epstein’s homosexuality played a significant role in contributing to his outsider status, so too did anti-Semitism. Jews were not particularly common in the United Kingdom entertainment industry in the 1960s. “The U.K. music business was run by old white Catholic knights of the British Empire,” Tiwary said.

In the novel, Tiwary and Robinson depict that sort of anti-Semitism in several panels featuring a breakfast meeting between Epstein and Colonel Tom Parker, Elvis’s manager, at The Plaza. Robinson etches a portly Parker with devilish blood-red eyes, who proceeds to gorge himself while uttering anti-Jewish comments. Epstein, a misunderstood maverick, had sought out Parker, thinking he might ultimately become a friend who could show him the ropes. As Tiwary reimagines that event (which did take place, though little is known about what was actually said), Epstein, instead, gets a different kind of career advice.

“There are Jews here,” Parker said of New York, adding, “and Jews will take advantage of you. “I warned Elvis the same about Los Angeles… too many damn Jews.” Tiwary claims Parker did, in fact, make those statements.

Tiwary plans to begin production on a feature film about Epstein with “American Beauty” producer Bruce Cohen in 2014, and has already gotten permission from the Beatles through Apple Corps Ltd to use the Fab Four’s music in the movie. “We are the first and only film about the band in history to have gotten those rights,” he said, adding that he recently learned that McCartney himself has read and loves the graphic novel.

“Maybe it’s part of the karma of the whole thing,” Tiwary said of why he dedicated himself and journeyed for two decades to tell Epstein’s story. “Brian got turned down by everyone.” He recalled thinking: “Maybe I need to get turned down by everyone until I get the ‘Yes.’ And you know what? When I get the ‘Yes,’ I’ll be the first one in history to do it, in much the same way Brian was the first one in history to do a ton of things.”

Karen Iris Tucker is a freelance writer who writes about health, entertainment and cultural politics.