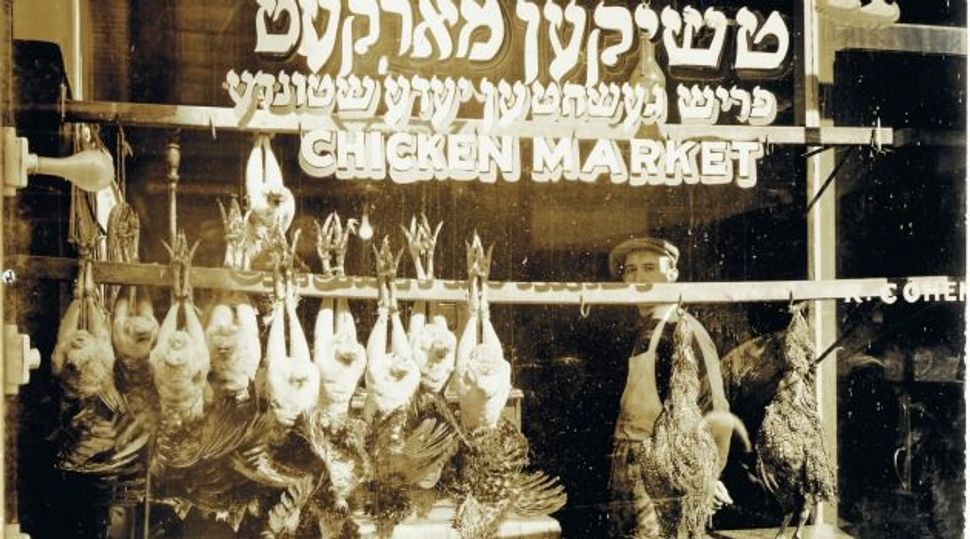 Looking a bit like St. Peter crucified upside down, nine not-yet-plucked chickens dangle from hooks in a storefront window; the alignment of their bound feet evokes hamsas. There’s no warding off the evil eye for these upturned chickens, whose tail feathers are naughtily exposed, or for the two others, which are violently suspended by their beaks. The real birds contrast wittily with cartoonish illustrations of a rooster and a duck painted on the window; in this instance, life doesn’t imitate art.

The store depicted in Berenice Abbott’s “Chicken Market, 55 Hester Street, Manhattan, February 11, 1937” displays the Yiddish signage (some of it transliterated from the English): “Strictly kosher chicken market; freshly slaughtered each hour,” with the Hebrew word “kosher” circumscribed by a Star of David. The photo is one of about 80 works from the Art Institute of Chicago’s collection that appear in the museum’s exhibit “Max Kozloff: Critic and Photographer.”

Abbott, whose series “Changing New York” was funded by the Federal Art Project, was not Jewish, but as Richard Woodward noted in the 2002 New York Times article “Behind a Century of Photos, Was There a Jewish Eye?” that was no problem for Kozloff, who organized the Jewish Museum’s exhibit “New York: Capital of Photography” that year. “[Kozloff] writes about a number of non-Jewish photographers, including Lewis Hine, Berenice Abbott and Walker Evans,” Woodward wrote. “But, he explains, ‘in truth, we’re largely dealing with a picture archive of an American city visualized by Jews, to which a few distinguished Gentiles have contributed.’”

At the Art Institute of Chicago, where about 30 of Kozloff’s own photographs hang alongside 45 works of photographers he has reported on — such as Abbott — Jewish content doesn’t come up as often as it did at the Jewish Museum. But one of Evans’s works, “Girl in Fulton Street, New York, 1929, printed 1962,” which Kozloff dwelled upon in his essay “Jewish Sensibility and the Photography of New York” appears in the Art Institute show.

“Evans is interested in the disorder of the incident but frames it with slightly skewed horizontals and verticals that hold the stabbing diagonals. His concern is with a perception of apparent chaos that is contained by his discovered structure,” the Art Institute show’s wall text quotes from Kozloff’s essay. “Evans’s woman is proposed, simply, as a member of the urban habitat; he and his subject are as much at sea within it, or as much in possession of it, as anyone else.”In his essay, Kozloff juxtaposed Evans’s photograph with Lou Stoumen’s “Sitting in Front of the Strand, Times Square, 1940,” and identified Evans’s perspective as goyish and Stoumen’s as Jewish.

“It may be that Jews behave differently because of their lovers’ quarrel with assimilation,” he wrote. Stoumen achieved a portrait of “being by oneself in the city,” and his subject, “is a solitary in Times Square, the world’s busiest crossroads. Here is a wistful stranger with whom the photographer connects. The crossroads is undoubtedly a grain place, but it is not ‘theirs.’”

This aspect of Kozloff’s criticism — in which he invoked Alfred Kazin’s “Walker in the City” and asks to whom the streets of New York belong — is absent from the wall texts at the Art Institute, and indeed the question of what makes Jewish photography per se, and the suggestion that the best and most accurate photographic depictions of New York are Jewish in nature continues to be controversial.

“I think Max has been very honest and even daring in putting forward the theory about something special in Jewish photography,” says Joël Cahen, the director of the Jewish Historical Museum in Amsterdam, who saw the exhibit on a recent trip to Chicago. “He is not making any kind of ‘Wir Wunderkinder’ (‘Aren’t we wonderful?’) theory out of it.”

I tend to agree with Cahen’s estimation that Kozloff is “extremely Jewish” in his eye, criticism, and reviews, and Cahen is right to note the humor in Kozloff’s work.

That “Jewish” lens that was once used to document, imagine, and examine New York may have faded somewhat in the age of “selfies” and Instagram, where every tourist and pedestrian fancies her- or himself a photographer. But even those who don’t subscribe to Kozloff’s bold claims about Jewish photography can benefit from reading (or rereading) “New York: Capital of Photography.”

The best takeaway from the essay might be its refusal to adopt a “chosen,” photographic light-unto-the-nations model. By seeking an elusive Jewish psychological sentiment in photography, Kozloff wasn’t claiming the medium as Jewish any more than he was pretending that Jews have a natural gift for the lens. Instead, Kozloff discovered in a particular group of photographers who studied New York an understanding of alienation and the experience of being an outsider that served “not as an obstacle but as an inherent part of the experience they offered.” Outsiders, after all, have created some of history’s greatest artistic works.

Menachem Wecker is a freelance writer in Chicago and the former education reporter at U.S. News & World Report.