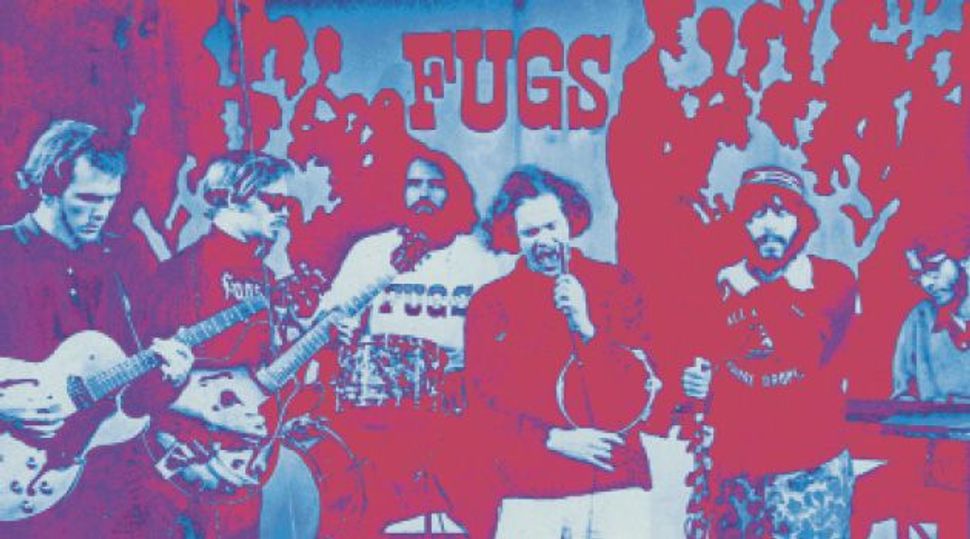 Band in New York: Tuli Kupferberg appropriated Yiddish melodies for songs he performed with his band The Fugs. Image by Courtesy of Ed Sanders

The archive of the late Tuli Kupferberg, a seminal figure in New York’s counterculture scene of the 1960s who died in 2010 at the age of 86, has been acquired by New York University’s Fales Library. Kupferberg’s work, which included poems, songs and cartoons, drew on Jewish sources, from the Yiddish folk melodies appropriated by his band, The Fugs to Tanakh quotations used in daily “perverbs,” Kupferberg’s witty, altered aphorisms on YouTube.

Marvin J. Taylor, head of the Fales Library, who has been spent the last two decades collecting material about the arts scene in lower Manhattan, confirmed that Kupferberg’s archive, the Kupferberg and Topp Collection was delivered on September 1. Sylvia Topp, a Canadian-born writer and editor, was Kupferberg’s wife.

“He’s sort of the grandfather of the downtown arts scene,” Taylor told the Forward. “It’s hard to overestimate his importance in the scene.”

Daughter Samara Kupferberg said another major university and the Library of Congress had expressed interest in the archive, but added that when her father was alive, he wanted it to go to NYU. “He thought that that would be the best place for it,” she said.

Neither Taylor nor Samara Kupferberg would comment on the purchase price of the archive, but two close friends of Kupferberg estimated the figure to have been between $100,000 and $200,000.

“That’s a reasonable guess. I don’t want to confirm or deny it,” said Ken Lopez, the rare book dealer based out of Hadley, Mass., who brokered the sale. Lopez previously arranged the sale of the William Burroughs archive and recently appraised the archive of Ken Kesey, another major figure of the 1960s counterculture.

Lopez’s web page for the archive lists materials from a 70-year period, including “handwritten and typed manuscripts of poems, songs, articles, and novels; original art, cartoons, collages, and illustrations; costumes, props, and handmade percussion instruments.” The collection, which is rich in ephemera of the Lower East Side bohemian community and the anti-Vietnam War movement, filled 180 banker’s boxes.

“He was as much of a pack rat as I,” said Ed Sanders, Kupferberg’s friend and cofounder of The Fugs. Sanders recalled Kupferberg’s remarkable memory of the Bible, obscure talmudic passages and hasidic lore. He still marvels at Kupferberg’s ability to sing Yiddish radio commercials from the 1930s.

Lopez is thankful that Kupferberg also retained boxes and boxes of cultural artifacts. “He seemed to have an understanding that [these things] were important and some record of them ought to be preserved,” said Lopez.

Visitors to the NYU archive may be interested in reading an unpublished autobiographical novel that describes Kupferberg’s teenage and college years. Other gems include black panties emblazoned with “The Fugs”; the band’s fan mail from teenagers in the 1960s; cassette recordings of Kupferberg working on songs; and Kupferberg’s correspondence with such cultural luminaries as Aldous Huxley, Henry Miller, Howard Zinn and Norman Mailer.

Both Lopez and Taylor confirmed that video recordings of Kupferberg’s cable TV show, “Revolting News,” are currently not part of the archive. Fifteen years of the public access show produced by Brooklyn musician Norman Savitt and Kupferberg’s longtime girlfriend, Thelma Blitz, are the subject of ongoing legal negotiations. Some of the material used in “Revolting News” can be viewed YouTube. It may be some of the most overtly Jewish content in the archive: Kupferberg holds forth on the Jewish laws of family purity, raps about his trip to Israel in 1990, and sings a song about the man who revealed the Israeli nuclear arsenal. In a music video of The Fugs’ song “Backward Jewish Soldiers,” which is sung to the tune of “Onward, Christian Soldiers,” Blitz reversed black and white footage of World War I soldiers marching, and incorporated photographs of Kupferberg in front of a shul in Brooklyn and a Jewish home for the poor in London.

Samara Kupferberg hopes an exhibit utilizing materials in the archive will help with the dissemination of her father’s work.

“He would want that,” she told the Forward. “That was kind of his whole mission, just to make the work to share with the world.”