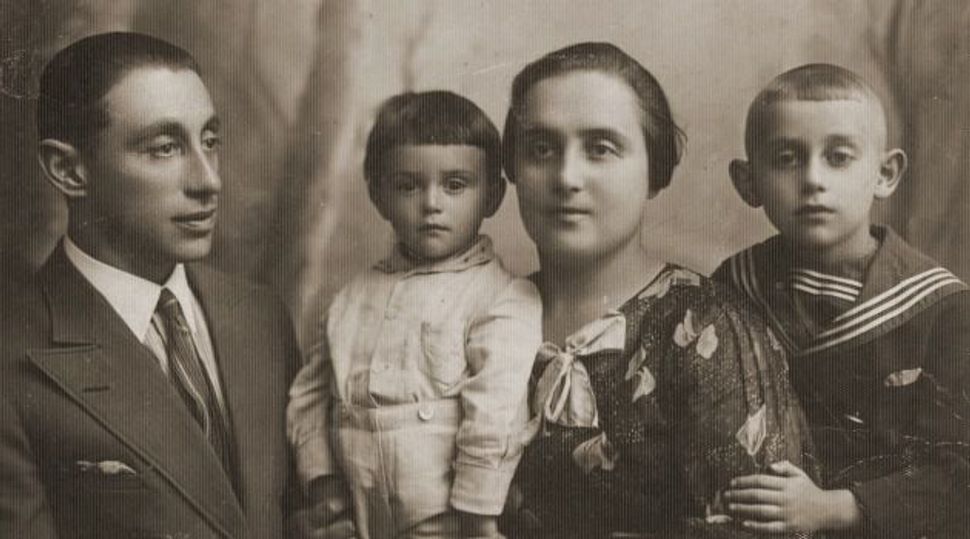 A View Onto History: The world of Doba and her family is explored in a new memoir by David Laskin who comes from a privileged branch of an Eastern European Jewish clan. Image by Courtesy of David Laskin

The Family: Three Journeys into the Heart of the Twentieth Century
By David Laskin
Viking Adult, 400 pages, $32

David Laskin descends from the most privileged branch of an Eastern European Jewish clan that, like many, splintered into three groups during the convulsions of the last century. Geography turned out to be destiny: The Americans built businesses, including the Maidenform bra company; the Israelis pioneered a nation; the Europeans were murdered.

“History made and broke my family,” Laskin writes, introducing a saga that zigzags from economic triumph to desperate tragedy.

Like many American Jews of the baby boom, Laskin grew up in a comfortable suburban home, only loosely connected to his heritage, ignorant of his immigrant grandparents’ precise national origins or reasons for leaving the old country. None of his relatives discussed the Shoah with him. “The Family,” inspired in part by a trove of letters, is Laskin’s attempt to fill in those ellipses.

A model of dogged reporting and narrative skill, “The Family” inevitably evokes Daniel Mendelsohn’s 2006 masterpiece, “The Lost: A Search for Six of Six Million.” Both books chart the intersection of world-historical events with family history; both memorialize relatives felled by Nazi genocide in the shtetls, fields, forests and extermination camps of Eastern Europe.

But there the similarities end. Mendelsohn’s elegiac work is lushly and self-consciously subjective — as much a meditation on history, memory and the difficulty of establishing the truth, or even facts, about the past as it is a coherent recreation of those facts. Grounded in biblical exegesis and Mendelsohn’s own classical scholarship, “The Lost” is, in the end, a quest story. The indefatigable author serves as its sometimes befuddled hero, slashing through decades-old forests of hearsay and myth.

Laskin, the author of “The Children’s Blizzard,” published in 2004, and the descendant of generations of scribes, is no less emotionally invested in his narrative. He, too, spent years traveling — in his case, to Belarus, Lithuania and Israel — in search of answers.

But in between an eloquent first-person introduction and epilogue, Laskin steps back and assumes the prerogatives of a novelist. While occasionally underlining gaps in the record, he uses an authoritative third-person voice to describe not just his characters’ actions, but often their thoughts and emotions.

Laskin’s curiosity, we learn, was first piqued by a family myth: that one of his mother’s relatives was Stalin’s henchman Lazar Kaganovich, a culprit in the famine genocide that killed millions in Ukraine in the early 1930s. That arresting story turned out to be false, but led Laskin to his Israeli cousins, a cache of Yiddish-language letters, and questions about his maternal family tree.

“The Family” begins with a sketch of Shimon Dov HaKohen, Laskin’s great-great-grandfather. A “humble, ordinary man” living in Volozhin, in what is today called Belarus, he spends his days copying the Torah.

Two of his sons, Avram Akiva and Shalom Tvi, figure prominently in the narrative. Avram and his wife, Gishe Sore, later known as Abraham and Sarah, settle in Rakov, the town where she has roots. Four of their children immigrate to America, fleeing revolutionary upheaval and limited economic prospects. In 1909, Abraham and Sarah and the rest of their children follow. Shalom Tvi and his family fatefully remain behind. In New York, Laskin’s formidable great-aunt Itel, known as Ida Rosenthal, finds quick success as a dressmaker.

Along with her husband William, a designer, she will eventually launch Maidenform and become wildly rich. Three of her brothers (including Laskin’s grandfather) join their father in a wholesaling partnership that specializes in flatware and small appliances.

Meanwhile, two cousins, Sonia and Chaim, voyage separately to Palestine, where they marry and eke out a hardscrabble agricultural living. Sonia is the youngest daughter of Shalom Tvi, a man who, marooned in exile, emerges as the book’s most memorable and tragic figure.

He travels to New York in July 1939, in part to scope out escape routes for the rest of his family. “Everyone was sweet, helpful, generous, accommodating — but the truth was that after the first few weeks, America left him cold,” Laskin writes. The onset of World War II that September traps him there, as it strands his wife, two daughters and their families in Vilna and Rakov. And this is where Laskin’s narrative, fueled by surviving letters, grows propulsive, urgent and heart-breaking.

Writing in care of Sonia in Palestine, Shalom Tvi tells his wife, his daughter Etl and other family members in Rakov: “I am writing you with a broken heart from the disaster that has happened to the world and especially to us. I am left severed from you.”

From Vilna, Lithuania, another daughter, Doba, writes increasingly bitter letters to both Palestine and New York. Though money flowed to her from the American family, what she demanded were immigration visas. “Doesn’t the family there want us?” she asks her father. “Why do they remain indifferent in these hard times?”

By the time war began, it was nearly impossible to arrange immigration from Eastern Europe to the U.S., Laskin writes, while noting that “there is no evidence that the relatives tried.” In a recent essay in the Forward, he reports that one relative did hire a lawyer to begin the process — too little, too late.

Doba, according to Laskin’s best guess, died in the gas chambers of Sobibor. None of the European family survived, and Laskin reconstructs their fates with surprising precision. In what counts as scant comfort, the bereft Shalom Tvi managed to sail to Haifa after the war to reunite with his one surviving daughter, Sonia, on the cusp of Israeli statehood.