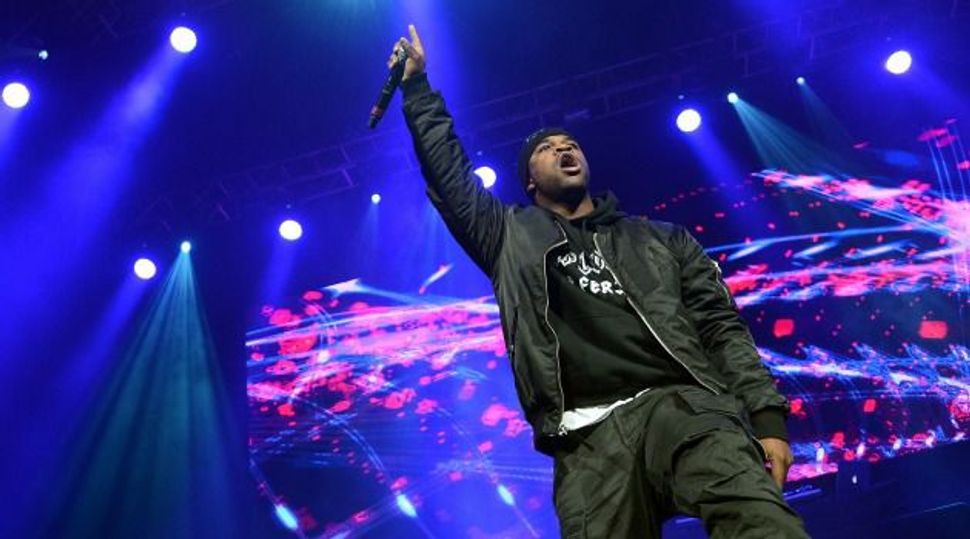 Rap Cantor? In the largely NSFW song ?Work,? A$AP Ferg asserted, ?I be out tomorrow, my lawyer?s Jewish.? Image by Getty Images

History tends to treat the largely cordial relationship between African-Americans and Jews as a thing that ended around 1991, in Crown Heights. But in 2013, hip-hop was one place where Jews and African Americans got along just fine.

Some of the most talked about releases in hip-hop this year were recorded by Jewish artists: Drake, Mac Miller and Action Bronson. But 2013 also saw a slew of Jewish mentions in hip-hop. “I be out tomorrow, my lawyer’s Jewish,” sang A$AP Ferg in January’s “Work.” “He put in work, got these n—-s going bezerk.” By August, a YouTube video compilation went viral, showing rappers Kanye West, Cam’ron, Killer Mike, Gucci Mane and Jay-Z thanking their Jewish lawyers in songs; a huge Star of David bling adorned the cover of Rick Ross’s latest “The Black Bar Mitzvah.”

But is the relationship only financial? Taking as examples Rick Rubin, Lyor Cohen, the Beastie Boys, and Matisyahu, it seems that hip-hop has always beat someplace in the Hebrew chest itself. Jewish prayer is probably the closest thing to hip-hop in terms of words sung in high speed. Larry David has pointed out the resemblance between hip-hop’s “-izzle” suffix and Yiddish; Sarah Silverman has noted that “Yo!” is the reverse of “Oy!” Perhaps these similarities are the result of the Caribbean influence at the roots of hip-hop. Singing about “Zion,” the Rastafarians chant “yeah,” “jah” and “hey,” recalling sacred names of God in Hebrew.

Does hip-hop practice Kabbalah? This may sound far-fetched. But looking at the cover of Ab-Soul’s last hit album “ILLuminate,” which features the sacred blueprint of the kabbalistic Tree of Life, it seems the mystic and the historic aspects are really one and the same. A large portion of Jewish faith is rooted in the recognition of God as matir asurim, the Unchainer of Slaves. And hip-hop and Judaism have always been all about breaking out of slavery. In slavery-aware 2013, hip-hop’s fascination with Jewish money-making may be read as an appreciation of a similarly persecuted minority’s survival mechanism.

Seattle ex-gangsta rapper D. Black converted to Judaism, changed his name to Nissim, and this year released “Sores.” The single, featuring a hazan, weaves together the narratives of a Holocaust survivor and a black slave. Maybe this is what 2013 had been: an act of recognition between two traumas.

Gon Ben Ari is an Israeli writer currently living in Brooklyn. His second novel, ‘Sequoia Children’ is being translated into Hebrew.