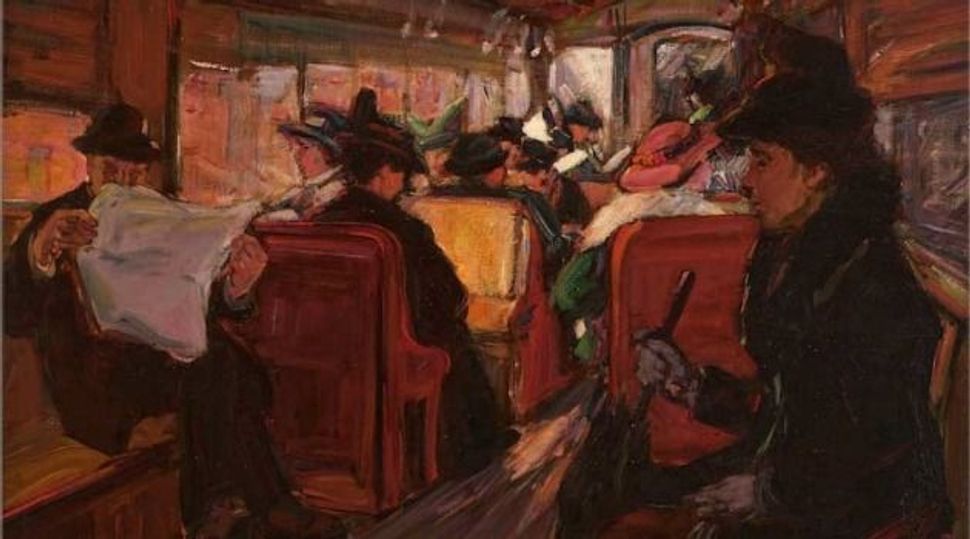 Artist Theresa Bernstein liked crowds. A retrospective of her work, on display through January 18 in New York at The Graduate Center, CUNY’s James Gallery, features her 1923 painting “The Immigrants,” which depicts figures grouped together on the bow of a ship. In the foreground, a mother holds a baby clearly evoking a Madonna and child, facing the viewer. Meanwhile, other figures look away toward a space beyond the oil’s borders. Like much of Bernstein’s work, this painting teems with life, with a rich sense of color dominated by ochres and earth tones. Looking into the gallery’s big windows, passersby on Fifth Avenue cannot help but ask of this exhibit of 48 paintings, plus books, journals and memorabilia and its sister show at Baruch College’s Sidney Mishkin Gallery: Why have we never heard of this artist?

“That’s complicated,” says the exhibitions’ curator, Gail Levin, Distinguished Professor of Art History, American Studies, and Women’s Studies at the Graduate Center, City University New York and Baruch College. “She was erased, and there are many reasons why women artists are erased.” Levin first heard of Theresa Bernstein when she was researching her definitive work on Edward Hopper, “Edward Hopper: An Intimate Biography,” in the 1980s, adding that in comparing responses to these artists’ exhibitions, Bernstein’s work “garnered more attention” than Hopper’s. To contextualize the situation of women artists, Levin said, “Bernstein was born just three years after Georgia O’Keefe. Both enjoyed great success in their time, yet only O’Keefe achieved celebrity and lasting fame.”

Why this is the case is yet another question for art historians and feminists. While Alfred Stieglitz promoted O’Keefe, photographing his wife in the nude, Bernstein’s husband, the painter William Meyerowitz, wouldn’t let his wife show her work when guests came to his studio. Nevertheless, they had a 63-year marriage. His last portrait before his death in 1981 was of Bernstein. On his deathbed, when she was 90, Meyerowitz said, “You must go on.” Bernstein died in 2002 just shy of her 112th birthday. “She took him literally for 23 more years,” said Levin as she led a tour of the exhibit, adding, “Theresa Bernstein worked and had a show in every decade of the twentieth century.”

With this show and the comprehensive catalogue, “Theresa Bernstein: A Century in Art,” that she edited, Levin attempts to address this artist’s relative obscurity. After early success, Bernstein’s career suffered the vagaries of the art market. She never established a longstanding relationship with an art dealer. In some ways, she erased herself. She chose to lie about her age, for example, and left a scrapbook for posterity but cut off dates of clippings, thereby erasing years of acclaim. Associated with the Ashcan School of realists, Bernstein held fast to the figurative, and when Abstract Expressionism arrived, she did not “jump on that bandwagon,” Levin said. By the time the painters came from Europe to escape the Nazis — Leger, Mondrian, Chagall, Tanguy, Breton and Ernst, among them — Bernstein’s work began to be regarded as passé. Nevertheless, the exhibition reflects the life of an artist whose work captures the personal and public, reflective of family and the historic moment of her time.

Spanning the twentieth century, Bernstein’s oeuvre also documents New York City history. Paintings of her husband, her Upper West Side studio, Allen Street on the Lower East Side and important locales are juxtaposed with oils of important historic events such as Armistice Day. Often, mothers holding children are depicted, evoking, says Levin, the personal tragedy of the couple’s only child, Isadora, who died as a baby. Bernstein never recovered from that loss. Often, the work includes not only her own parents but important cultural figures, such as Martha Graham, Louise Nevelson, Cab Calloway, Louis Armstrong and Albert Einstein.

Bernstein’s parents had arrived in America with her, an only child, from Krakow, Poland, a fact that Bernstein hid, finding it more strategic to claim she was born where she was raised, in Philadelphia. Throughout her career, she painted Jewish subjects. While not overtly Jewish in theme, “The Milliners” (1918) shows a group of ladies sitting about sewing hats, a personal subject for her as Bernstein’s sister-in-law worked in the millinery industry, a vocation that was both immigrant and Jewish. She painted the Spanish Portuguese Synagogue in 1919; her painting “The Student” (1945) features a Hebrew notebook at center; “The Menorah” (1948) celebrates the birth of Israel.

In Philadelphia, Bernstein enjoyed a friendship with the Cone sisters, wealthy patrons of the arts who supported Picasso and Matisse. A 1930 painting of this pair verges on abstraction. When the Jewish Museum did their excellent show of the Cone collection, they simply did not know about this painting. Said Levin, “No one had as yet put the work out there.” As Levin continued to make her way around the gallery, she paused to note background details she had not seen before, exclaiming that there are still so many points to be researched, so many privately held paintings that have not surfaced. For a full assessment of Theresa Bernstein’s contribution, this exhibition, which will travel to Lancaster and Philadelphia, Penn., Beverly, Mass., and Boca Raton, Fla., is only a beginning.

Regina Weinreich is the author of “Kerouac’s Spontaneous Poetics,” editor of Kerouac’s “Book of Haikus” and co-producer/director of the documentary, “Paul Bowles: The Complete Outsider.”