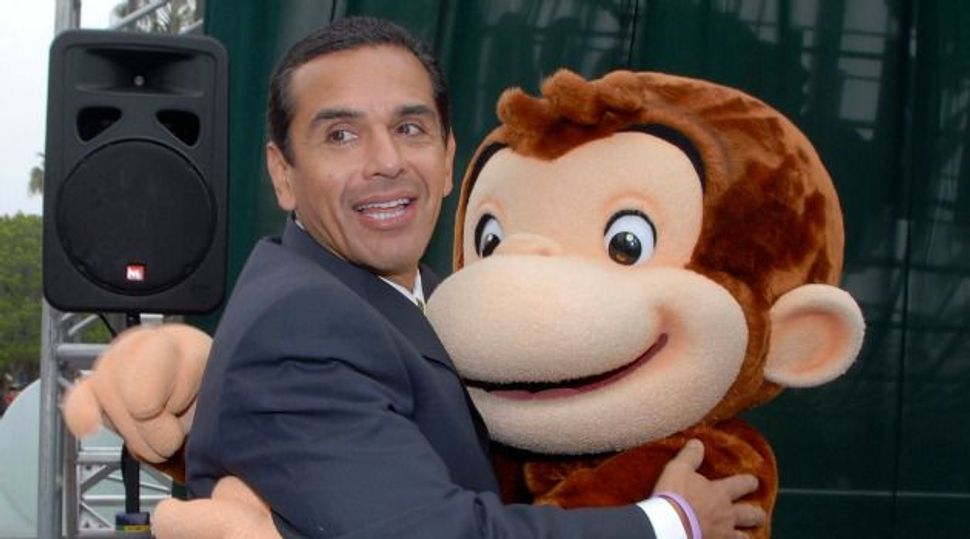 Curiouser and Curiouser: Back in 2007, Los Angeles mayor Antonio Villaraigosa posed with Curious George, a creation of Margret and H.A. Rey, whose story is being told at the Holocaust Museum Houston. Image by Getty Images

In many ways, 2013 has afforded Jewish children’s literature the big break it has needed for some time — perhaps akin to the widespread attention that Jewish comic books and graphic novels have received for years, with their Jewish mice and superhuman men punching out Hitler.

At the Chicago Humanities Festival in November, Paul Reitter, a professor of German at Ohio State, addressed the Zionist identity that informed Felix Salten’s book, “Bambi.” San Francisco’s Contemporary Jewish Museum is showing, through March 23, “Frog and Toad and the World of Arnold Lobel.” And the Holocaust Museum Houston is exhibiting, through June 15, works by the authors of “Curious George” in the traveling show, “The Wartime Escape: Margret and H.A. Rey’s Journey from France.”

The resurgence of interest — at least, at major U.S. museums and cultural venues — in the Jewish identities of the authors and illustrators of some of the most classic children’s books has coincided with the 50th anniversary of “Where the Wild Things Are” by Maurice Sendak — easily the dean of Jewish children’s literature.

Sendak’s death in 2012 may have fueled museums’ recent focus on Jewish children’s literature, according to June Cummins, a specialist in children’s and Jewish American literature and associate professor at San Diego State University’s National Center for the Study of Children’s Literature.

Sendak was always “at the center of attention in children’s literature,” said Cummins. “If there is a recent upsurge of interest in places like museums, then I would connect that to two things: the recent death of Sendak and the recent discovery of information about the Reys, she said. (Cummins wrote about the Jewishness of the “Curious George” authors back in the 1990s.)

She also thinks that the attention Salten, of “Bambi” fame, is receiving is “a little late to get on the bus.” One Jewish area that Cummins is studying — contemporary tween literature featuring Jewish characters — is certainly growing, as well.

“In the ’90s, I co-authored an article about the limitations to the genre of Jewish children’s literature, and I think in some way publishers noticed these limitations and opened up a bit,” she said. “I do note a recent upswing in these sorts of books.”