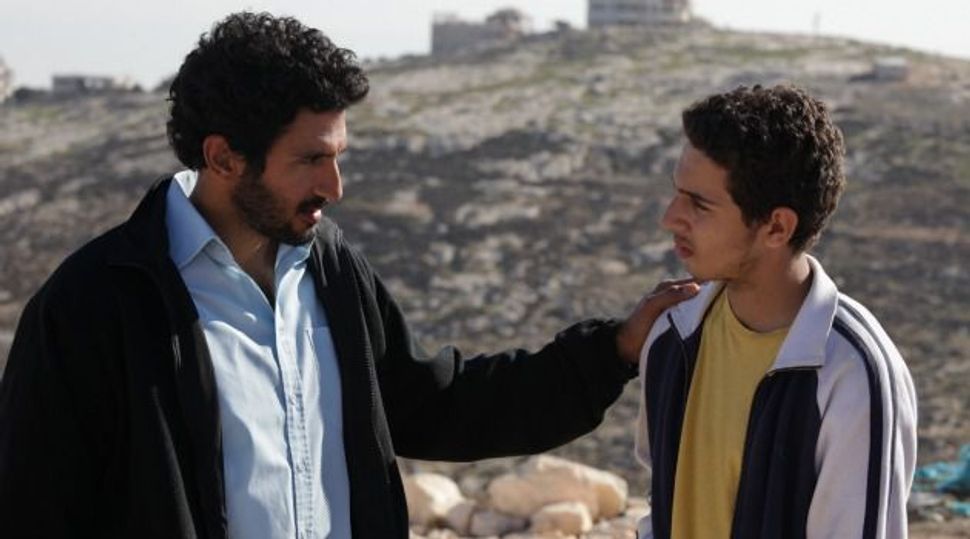 Trouble in the Holy Land: ?Bethlehem? was Israel?s official entry to the 2014 Academy Awards. It will be screened at numerous film festivals throughout the country. Image by Adopt Films

In his classic 1988 account of Hollywood’s Jewish roots, ‘“An Empire of Their Own,” Neal Gabler argued convincingly that Hollywood (and therefore, world cinema as we know it) would not exist today without the contributions of the Jewish pioneers and studio heads who first turned movies into our country’s great popular art form.

But if Jews invented Hollywood (and yes, we did), then why do we need Jewish film festivals at all, let alone 80 of them, scattered across the 50 states like so many kosher delis?

The answer, of course, is that those early moguls, regardless of what they celebrated privately, made a fortune feeding into the fantasies of America as a white and Christian nation, and the art they made and financed reflected those fantasies. This is how Betty Perske became Lauren Bacall, how Issur Danielovitch became Kirk Douglas and how Bernard Schwartz became Tony Curtis.

So in these times, it’s worth spending a few days immersed in a national and international cinema that is not only Jewish, but also proudly so, a cinema that sees our culture as something to honor and explore. And just as the festivals celebrate the Jewish experience with pride and honor, we celebrate their programmers, organizers and, of course, their tens of thousands of annual attendees. Without further ado, we present our first Forward Festival Awards.

The First and Foremost

The oldest and biggest film festival in the world, the SFJFF was founded in 1980 and runs in one form or another all year, but it culminates in a three-week summer bonanza that spans several Bay Area cities, and regularly features the best of Jewish cinema, past and present. As tech-savvy as its location would suggest, SFJFF also features a robust transmedia program, an impressive digital archive and a carefully curated selection of short films that are available to watch for free online. Make your reservations now, but this is summer in San Francisco, so don’t let the dates fool you: Pack a sweater. And a sweater for the sweater.

You can’t get classier than Lincoln Center, and you can’t get a richer variety of educated fans than those among its regular audiences. NYJFF, co-presented by Lincoln Center’s Film Society and the Jewish Museum, combines world-class features, top talent and invigorating symposia, and offers an especially rich selection this year, including Pawel Pawlikoski’s “Ida” and Yuval Adler’s stunning debut film, “Bethlehem.” Be sure not to miss this year’s master class with Amos Gitai, one of Israel’s greatest filmmakers, on January 19.

The great disadvantage of the MJFF is also its great advantage — balmy weather and white sand that may tempt you out of the theaters. But its selections will lure you back in: Coming right on the heels of the NYJFF, this fest features many of the same offerings as its northern counterpart — as well as a few special twists of its own, including, this year, “Metropolitan” director Whit Stillman hosting the 30th anniversary screening of Woody Allen’s “Broadway Danny Rose.” As fans of his oeuvre already know, Stillman is about as Jewish as Mia Farrow, but his comedic and intellectual kinship with Allen’s work promise to make the evening as unforgettable as Danny Rose himself.

Award for Best-Named Award: The Pomegranate

Now celebrating its 17th year, this annual festival — held in New York at the Center for Jewish History — focuses on the experience, history and cinematic works of Sephardi and Mizrahi Jews. 2014 highlights will include Duki Dror’s documentary “Shadow in Baghdad”; Joann Sfar’s animated film, “The Rabbi’s Cat” and this year’s recipient of the Pomegranate Award for Lifetime Achievement, singer-songwriter and actor Enrico Macias, who will be given his Pomegranate on opening night, March 13, 2014.

In part thanks to co-founder and co-director Tom Luddy’s deep appreciation of Israeli cinema, the tiny Colorado town of Telluride has seen the American premieres of some of the best Israeli cinema. TFF has done perhaps more than any other festival to shine a light on some of the most groundbreaking and controversial Jewish-themed films in recent history. The past five years alone have introduced Oscar candidates and debate-starters like Ari Folman’s “Waltz With Bashir,” Dror Moreh’s “The Gatekeepers” and the stirring Shlomi Eldar documentary, “Precious Life.” Furthermore, two of the best films of the year, Jewish or otherwise, screened there just a few months ago as part of TFF’s 40th anniversary edition. We will be writing more about “Ida” and the devastating thriller “Bethlehem” closer to their theatrical releases in 2014, and you’ll be able to catch them again at Lincoln Center and in Miami, but like so many other great Jewish and Israeli films, they were first introduced to the United States in Colorado.

New York, Chicago, Miami, we expect. But Charlotte, N.C.? Baton Rouge, La.? After much deliberation, we finally chose The Mobile Jewish Film Festival, which will feature just seven selections (one of which is still a mystery), but still deserved an award because, well, Alabama.

Sheerly Avni is a frequent contributor to the Forward.