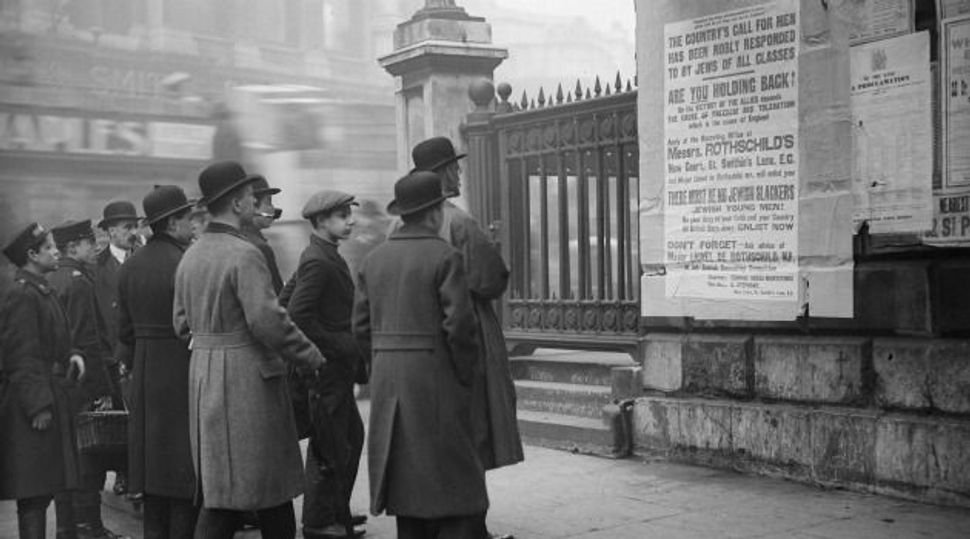 Given the enormous attention that numerically significant anniversaries have acquired in Western culture, the “golden” and “diamond” anniversaries of the 20th century’s two greatest conflicts will offer myriad opportunities for historical reflection.

This is especially true for Jews. Both wars profoundly shaped 20th century Jewish history. Yet until now, World War II has occupied a disproportionate place in Jewish memory. There is good reason for this — most notably, the Holocaust, whose effects are still in living memory. But the simultaneous commemorations will return World War I to the forefront of Jewish attention.

Among other things, the dual anniversaries will provide the opportunity to establish intriguing juxtapositions between the two conflicts. In the summer of 2014, for example, we will be able to reflect on how, 75 and 100 years earlier, German Jews perceived the outbreak of the two wars in entirely differently fashions. In 1914, German Jews shared in the larger nationalist euphoria, with poet Ernst Lissauer leading the nationalistic propaganda campaign against England (with his infamous “Hymn of Hate”) and 100,000 of his compatriots eventually serving on the front. In 1939, by contrast, German Jews viewed the commencement of hostilities with acute trepidation, having become the victims of nationalistic propaganda and losing some 250,000 of their compatriots to emigration.

Comparing anniversaries will remind us that World War I was just as disruptive as World War II was for European Jews. In 2015, we will be reminded of how, 100 years earlier in 1915, Polish-Russian Jews actually suffered more persecution at the hands of the Russian army than their descendants experienced 25 years later, in 1940, at the hands of the Wehrmacht. As tsarist forces retreated in the face of Germany’s offensive in the spring of 1915, they expelled more than 500,000 Jews into the east, where at least 60,000 perished. At the same time in 1940, less than 50,000 Polish Jews had been expelled by the Germans from annexed Polish territory into the Nazi-run General Government.

To be sure, Eastern European Jews subsequently experienced far worse violence under the Nazis. But when the year 2018 arrives, we should remember that 100 years earlier, starting in 1918, close to 100,000 Jews would be murdered in pogroms in the Ukraine. These murders would later be eclipsed by the Holocaust. But the juxtaposition reminds us that without the eruption of World War II, the killings of World War I would still stand today as the worst episodes of Jewish suffering in the modern era.

There will be less tragic things to remember as well. World War I destroyed the Pale of Settlement, liberated millions of Eastern European Jews from tsarist oppression, and gave countless others hope for a Jewish homeland in the form of the Balfour Declaration.

Many of these developments were crushed by World War II. But at the time, they were regarded as hopeful signs of Jewish progress. But above all, this year will provide the opportunity for reflection on the triumphs and tragedies of the 20th century Jewish experience.

Gavriel Rosenfeld is professor of history at Fairfield University. His new book, “Hi Hitler! The Nazi Past in the New Millennium,” will appear with Cambridge University Press in 2014.