How Ileana Sonnabend Became MoMA’s Ambassador of the New 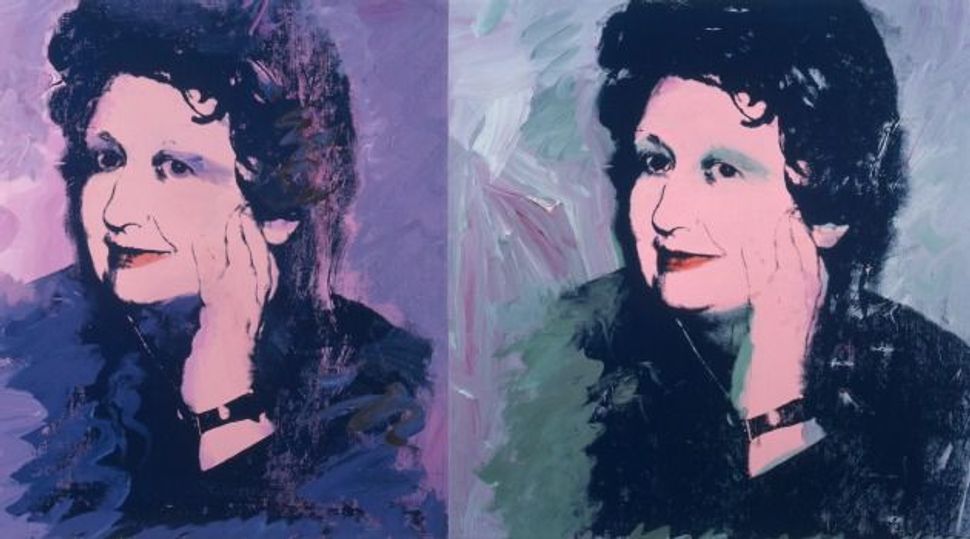 Pop Art Star: Ileana Sonnabend showed the work of Andy Warhol in the gallery she established in 1962. Image by Courtesy of MOMA

It sounds like the beginning of a riddle, or the setup for a logic problem. How to reconcile these two facts: (1) Ileana Sonnabend was not an artist; (2) the Museum of Modern Art is devoting a small but significant show to Ileana Sonnabend and anointing her “ambassador for the new.”

Actually, the distance between (1) and (2) is not all that paradoxical. Born to a Romanian Jewish family, Sonnabend, a gallerist and collector, has long been considered a visionary whose aesthetic shaped the art landscape in postwar Europe and America.

In fact, MoMA is not the first museum to acknowledge Sonnabend’s achievement: In 2011, the Peggy Guggenheim Collection in Venice organized “Ileana Sonnabend: An Italian Portrait,” bringing together 59 works from Sonnabend’s personal collection.) She championed Jasper Johns and Robert Rauschenberg (who once told The New Yorker magazine’s Calvin Tomkins, “Let’s just say I’ve never finished a painting without wondering what Ileana would think of it”), Vito Acconci and Jeff Koons, Oldenburg and Lichtenstein, Mel Bochner and John Baldessari, and she oversaw the crosscurrents of cultural exchange, bringing pop art and minimalism to Paris, and Arte Povera to New York.

Think of the art that mattered in the 1970s, ’80s and ’90s, and you will realize that Sonnabend probably had a hand in it. If the names of the artists she showed sound de rigueur now, the “mainest of the mainstream,” that’s because, in large part, Sonnabend made them so.

Her aesthetic was instinctual, her taste broad — even contradictory — and she combined gut feeling with canniness, a fearless streak with connections born of wealth and convenient parentage. Sonnabend’s father was the wealthy businessman Mihail Schapira, who once served as financial adviser to the king of his native Romania. Her stepfather was the artist John D. Graham, an important influence on the abstract expressionist painters; it was Graham who gave Jackson Pollock his first New York show.

At 17, Ileana Schapira met Leo Castelli; she married him a year later. With her father’s backing, she and Castelli opened a gallery in New York. After divorcing Castelli and marrying Michael Sonnabend, she moved to Paris, where in 1962 she established Galerie Ileana Sonnabend. There she showed the works of Andy Warhol and other pop artists, helping to create a European taste for the most American of art. Eight years later, she brought the Europeans with her when she opened a gallery in SoHo: The inaugural show was a Gilbert & George performance of a piece called “The Singing Sculpture.”

The MoMA show homes in on the first three decades of Sonnabend’s career, highlighting the artists and pieces she was the first to show: John’s “Device”; Oldenburg’s “Tartines”; James Rosenquist’s “Volunteer”; Michelangelo Pistoletto’s impressively grand mirror painting, “Two People”; Koons’s “Pink Panther.” This might as well be a page torn from an auction catalog, a fever dream of conspicuous art consumption. Still, “Ileana Sonnabend: Ambassador for the New” avoids coming off like the visual equivalent of “Now That’s What I Call Music!”: True, it is a “greatest hits” compilation, but one that speaks to the ways in which great taste is an art form of sorts.

And the show’s centerpiece — a Rauschenberg combine called “Canyon” — is actually a fascinating case study in the possibility of aesthetic resistance to the commercial. “Canyon” is made up of oil, pencil, paper, wood, metal, photographs and fabric on canvas, plus buttons and a mirror, cardboard box, pillow and paint tube, and a stuffed bald eagle. That last element made the work unsellable, given the bald eagle’s status as a protected species.

When Sonnabend died in 2007 at the age of 92, her family found itself in a Kafkaesque predicament: The Internal Revenue Service valued “Canyon” at $65 million and demanded a tax payment of $29.2 million, even as it would be impossible for the family to convert the work into any money at all. Sonnabend had even jokingly mentioned a desire to be buried with “Canyon”: She told Tomkins, “If they build a pyramid for me… I would like it in there with me.”

The issue was resolved when “Canyon” was donated to the MoMA: The IRS dropped its tax assessment, the MoMA included Sonnabend’s name on its Founders Wall and organized a show in her honor, and everyone lived happily ever after. But if this seems like a retread of the controversy caused by the New Museum’s 2010 show, the unappetizingly named “Skin Fruit,” curated by Koons from the collection of the Greek shipping magnate Dakis Joannou, the bald eagle guards against suspicions of inflated prices: It keeps things honest.

Sonnabend made a comfortable living dealing art, but money was not the point. (She had that luxury, of course, by virtue of having money in the first place.) Her interest lay elsewhere: in discovering the new, in letting innovation challenge her conceptions of art, in sharing her discoveries with others. To that end, she often presented works that were less than commercial — most notoriously, Vito Acconci’s “Seedbed,” a performance during which the artist lies beneath a specially constructed ramp, intermittently masturbating while gallery visitors walked over him. “Ileana Sonnabend” includes footage from Acconci’s performance, but it also showcases far more financially lucrative works: Roy Lichtenstein’s “Little Aloha,” say, or Warhol’s “1947 White.” But this is the way we live now, sorting the high and the low, collecting and curating as the finest form of art. And if you don’t quite buy that, the pillow that hangs from the canvas in “Canyon” and evokes testicles is right there with you, suggesting perhaps that it’s all bollocks.

How Ileana Sonnabend Became MoMA’s Ambassador of the New