The Problem With ‘Girls’ Is Men 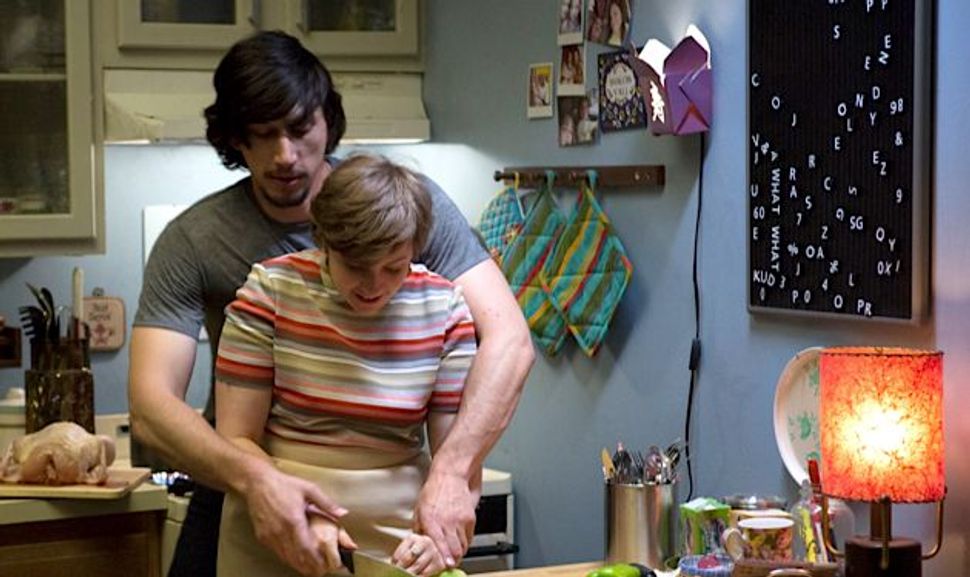 I am not a girl, but “Girls” is about me. Like the characters on the HBO show — which begins its third season January 12 — I am in my 20s, white, middle class and live in Brooklyn. I work in a creative field, have friends who are actors and baristas, and sometimes, to my embarrassment, find myself talking about social media in public. Once in a while I’ll venture to a party in Bushwick, though I’ve not yet smoked crack in line for the bathroom. So far, so normal, at least as far as people who write about “Girls” are concerned.

Of course if I were a woman, then “Girls” would really be about me. I might identify with its female characters’ struggles in life and love, especially those of its protagonist, Hannah Horvath, who is played by “Girls” creator Lena Dunham. I might sympathize with her attraction to her bad-boy boyfriend Adam (Adam Driver), and praise Dunham’s willingness to display her entirely normal body onscreen. I might go as far as Emily Nussbaum in her 2012 New York magazine feature, in which she proclaims the show to be “FUBU: ‘for us, by us.’” For many women, “Girls” has been a revelatory depiction of their own lives.

Representation, though, is a tricky business, and the attempt to realistically portray young women on television has brought down an avalanche of criticism. The expectation that the show should mirror the lives of its viewers has resulted in an odd dynamic, wherein “Girls” has been charged with not being enough like the world in which its critics see themselves, or would like to. For every writer like Nussbaum, who praised “Girls” for being “a sex comedy from the female POV, taking on subjects like STDs and abortion with a radical savoir-faire,” there has been another writer reproving the show for the narrowness of its view, especially when it comes to race. As Sarah Seltzer wrote on the Forward’s The Sisterhood blog, “In my own life… I can think of dozens of female friendships… that have been forged across culture, region, race and sexual orientation… All are just as ‘real’ as Dunham’s show purports to be.” In other words, the show’s white complexion isn’t a concession to realism, but a failure of realism itself.

I agree with this argument — including a black character among the main cast wouldn’t have been off-key — but the focus on the show’s accuracy assumes “Girls” to be something it’s not. Realism is as much about narrative methods as it is about verisimilitude, and “Girls” doesn’t measure up. Unlike a novel such as “Middlemarch,” whose breadth and detail make me think I know what it’s like to live in a 19th-century English town, or a TV show like “The Sopranos,” which leads me to assume a familiarity with the lives of New Jersey mobsters, “Girls” doesn’t feel like the life of anyone, whether I know them or not. This isn’t because of its focus on white, Brooklyn-living, middle-class characters, to the exclusion of other groups. Rather, it’s because “Girls” is a show almost entirely about dating and relationships.

In other words, it’s not the content of “Girls” that’s out of whack, but its emphasis. Of course, sex and romance are perfectly valid subjects for art, and many critics have praised “Girls” for its handling of these issues. Elaine Blair, writing in The New York Review of Books, singled out the show’s “frankness and naturalism” when it comes to sex, and Dunham’s work as a whole — starting with her student film, “Creative Nonfiction” and her 2010 feature, “Tiny Furniture” — for engaging in “heated dialogue with romantic comedy conventions.” And it’s true; there are plenty of interesting things about Dunham’s work, starting with her examination of sex from hitherto unseen angles.

But it’s sadly ironic that a show intending to portray the lives of young women winds up depicting them primarily in terms of their relationships with men. “Girls” does pass the Bechdel Test — that is, there are scenes in which two women talk about something other than a man — but that is a low bar, and “Girls” barely squeaks by. Indeed, relationship plotlines tend to invade parts of the show that should be engaging in their own right, including the professional aspirations of most characters. Unlike an inferior show such as “Entourage,” in which male characters’ struggles to make it in Hollywood take precedence over affairs of the heart, in “Girls” it seems that women’s careers would be dull without roping in love interests. Work here isn’t the main source of anxiety or aspiration — men are.

This is true not just of joe jobs like babysitting or hostessing, but even of Hannah’s all-important writing career. When Hannah is invited to give a reading at the Salmagundi Art Club by a former professor, the episode is laced with the possibility of something more developing between them. In the new season, when she gets a day job writing for the advertorial department of a major magazine, she can barely sit down before a cute, infidelity-tempting boy sticks his chestnut mop over the cubicle wall. Most egregious is Hannah’s struggle with Obsessive-Compulsive Disorder, which prevents her from filing a critical draft of her book. Though it starts as one of the most affecting parts of the show, at the end all is made well by Adam running shirtless to her rescue through the streets of Brooklyn. It’s a neat little ending, all tied in a bow, but wasn’t the point of “Girls” not to be so well put together?

The reason for such choices, I think, isn’t because Dunham is a traitor to feminism — it’s because “Girls” is a 28-minute TV show. In a movie like “Tiny Furniture” — which depicts a Hannah Horvath-like character recently returned to the parental nest after college, and which serves as a sort of prologue to “Girls” — sex and dating take an equal place alongside work and friendship and other life problems. But on a TV show there have to be choices to make and problems to solve every half-hour, and these can’t just be pulled from the ether. There’s a reason, after all, that so many shows center on law enforcement, organized crime, or politics, all of which have built-in dramatic engines. Sitcoms are different, but “Girls” isn’t a sitcom, despite some comic moments, and its basic situation — four friends living in Brooklyn — doesn’t lend itself to a state of terminal crisis. So, in order to “add stakes” (in the words of executive producer Judd Apatow), “Girls” resorts to tried and true plot points: hook-ups, break-ups, love and heartache.

The tension between the desire to make a show about the multi-dimensional lives of young women and the necessity of plotting the show according to one of those dimensions does more than just weaken its feminist credentials; it also vitiates many of the things that made “Girls” interesting to begin with. Though most of the characters start out boasting abrasive character flaws, the brutishness of early portrayals turns out to be unsustainable in the long run. This is especially true of Adam, who goes from being a condom-averse carpenter who sends a dick pic to Hannah by mistake, to a guy sweating through his Oxford shirt during a dinner date. Charlie (Christopher Abbott), boyfriend and ex-boyfriend of Hannah’s friend Marnie (Allison Williams), goes through an opposite metamorphosis, from cloyingly sweet lover to confident app developer extraordinaire. Granted, people are complex, and different under different circumstances, but such transformations seem all too convenient.

Most disappointing, even relationships in the show don’t always rise above cliché. There are too many arguments about who is always making it about themselves, and who was or wasn’t there for whom and when. Though Ray (Alex Karpovsky), a friend who employs Hannah at a coffee shop, gives an impassioned speech about how in New York it’s possible never to run into an ex, many of the show’s plots depend precisely on chance encounters at parties or on street corners. And for every moment of crude, never-before-seen-on-television sex, there’s another of what Blair terms “mutually rapturous face-to-face vaginal intercourse.” How many times can one character hook up with another’s ex before it all becomes one big yawn?

It seems that Dunham is aware of such problems, and in the third season she tries to lift the show beyond the confines of relationship drama. There is more focus on Hannah’s writing career, and also on the girls’ non-romantic friendships. There is a whole subplot involving Adam’s mentally ill sister, which reaches again into that dark but potentially rich vein of material. But “Girls” appears to be on a quixotic quest, at least when it comes to television. Is it possible to make a comic, realistic, short-form show about normal people living normal lives? Personally I don’t know that it is, but I wish well to anyone who tries, Dunham most of all. It doesn’t even have to be about me.

The Problem With ‘Girls’ Is Men