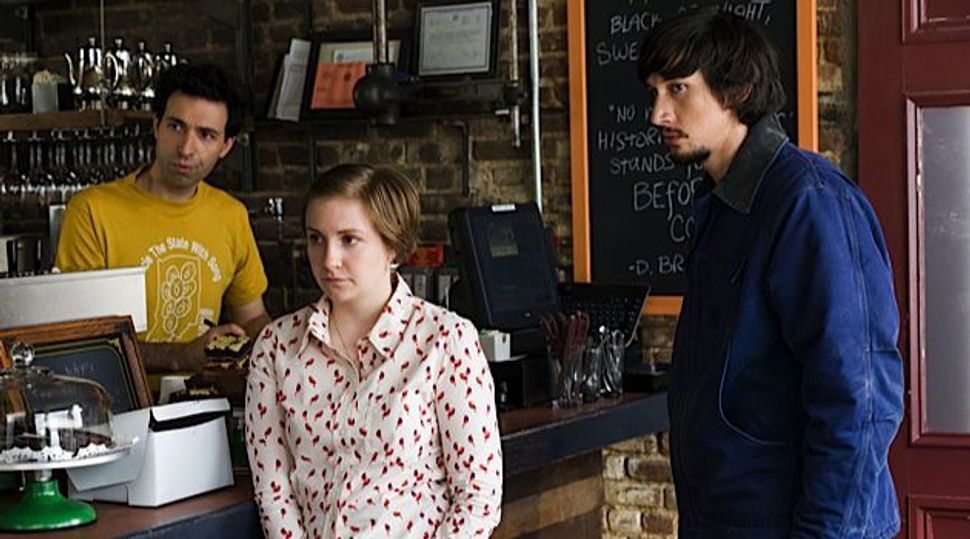 Halfway to Hollywood: ?Girls? doesn?t flatter its protagonists ? pictured here are Ray (Alex Karpovsky), Hannah (Lena Dunham) and Adam (Adam Driver) ? but one can?t help but like them. Image by Courtesy of HBO

I discovered “Girls” when it was well into the second season.

I had lived in New York for several months to attend the Columbia University School of Journalism. The initial excitement of being in the City That Never Sleeps had waned.

I had gotten used to discovering that almost every other person I met was Jewish, that shops had signs with Shabbat times and that you could find yellow school busses with Hebrew writing in Brooklyn. Those were unusual sights for someone from Austria, where a mere 10,000 people out of a population of 8 million are Jewish. I had also eaten enough Ben & Jerry’s ice cream, which isn’t readily available in Austria, to fill another pants size.

I hadn’t really heard about “Girls,” which premiered on HBO in April 2012, before I moved to New York that summer. Though it received some positive reviews in the Austrian press — dubbed “matter-of-fact realism” and a “modern epic” — it hasn’t quite achieved the same popularity as “Sex and the City” and other US TV series. But in New York, everyone around me was talking about “Girls.” So I gave it a try.

I liked it. The characters, and their problems, dreams and relationships felt like a caricature of the lives of my friends and me. Angsty Hannah, stuck-up Marnie, naïve Shoshanna and airy Jessa — wasn’t there a bit of them in all of us? Most of the people I had shared my childhood and teens with in Vienna were now in their twenties, educated and well-travelled, having grown up comfortably in the peaceful and clean former Habsburg capital. Our families and the network of the Austrian Jewish community were there to support us so we could devote some energy to worrying about body image issues, finding true love and navigating between badly paid internships at institutions with fancy names and noble missions, such as museums, environmental organizations and media outlets.

In “Girls,” stories ranging from failed job interviews and unflattering outfits to awkward conversations and unromantic sex, were presented with so much wit and zest that thinking about my own, somewhat similar experiences turned from cringeworthy to enjoyable. After I had watched Hannah eat cake alone on the beach of Coney Island after a disastrous night out at the end of the first season, I remembered a night spent eating pizza alone in downtown Vienna after leaving a boring party, because going home felt like admitting to a failed social venture — that night didn’t seem quite so embarrassing anymore.

The new episodes, which aired on Sunday, had strong, witty dialogue, hilariously awkward moments and some great story lines. They weren’t as raw, daring, and sometimes sad as the first two seasons: Shoshanna now has a relatively normal sex life, Adam is no longer an emotionally distant, constantly topless weirdo, and Jessa even refuses to sleep with someone. Seeing likeable characters in a deeply imperfect world was what I liked so much when I first watched it.

But even more importantly, Lena Dunham’s New York resembled my New York more than the one I expected to experience when I was younger. I grew up as a fan of Woody Allen, Simon and Garfunkel, and cheesy romantic comedies such as “Keeping the Faith,” “Down with Love,” and “How to Lose a Guy in 10 Days.” In my imagination New York was infinitely glamorous simply because it was halfway to Hollywood, at least when you measured the distance from Austria. After my first sightseeing trip to New York with my parents as a teen, I didn’t wash my jeans for two months. I wanted to preserve the dirt of Manhattan as long as possible. It didn’t bother me that this meant I couldn’t wear my jeans because the glamorous dust of the Big Apple would have mixed with an average everyday life in Vienna. The jeans were a reminder of the immense thrill I experienced when shopping for sweets and bagels at midnight; almost unthinkable in Austria, where shops still close early and on Sundays, and nutritious but unsexy dark rye bread is the baked good of choice.

But when I first watched “Girls” in early 2013, the dust of Manhattan came without glamour. Instead it was accompanied by a cockroach in our kitchen. I hadn’t befriended any Hollywood stars; I missed my family. Learning journalism didn’t involve cocktail receptions in SoHo lofts, but greasy pizza and M&Ms from the vending machine. It was exciting and boring, lonely and fun, unromantic and sizzling – just like “Girls.”