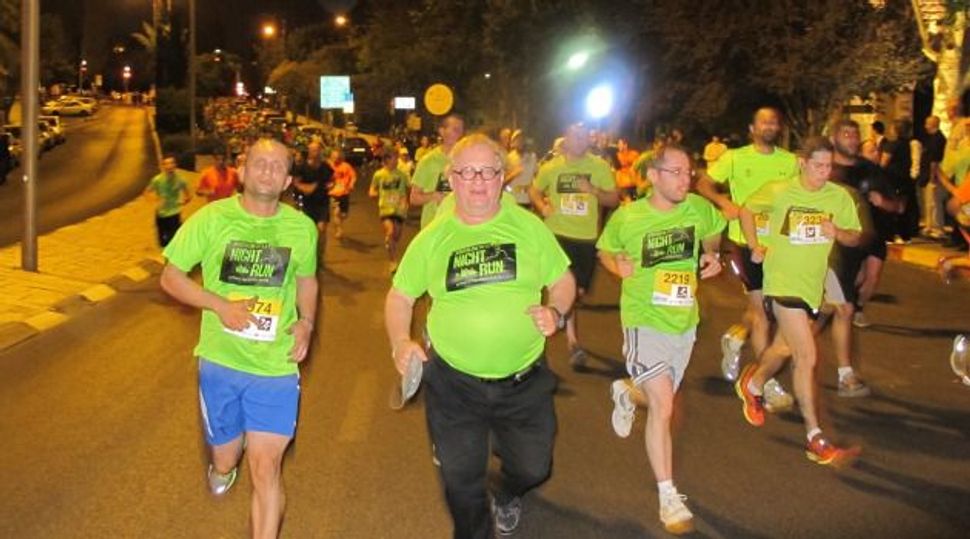 And, believe you me, there is no place on the planet with so many cats as Israel. In plainer terms, to give you a better picture, for the most part Israel is inhabited by cats and journalists. Everywhere you go you see one of them, and usually one standing in the way of the other.

This reality, obviously, makes Israel a good place to study journalism. Here, you see the craft of journalism taking shape.

I’m in Nazareth, a city inside Israel’s so-called Green Line, meaning the one before 1967. No U.N. here, no disputes here, no Israeli army rule here. No settlers here. Or, to be more exact: no Jews here. A Jew who wants to buy a home here better forget it because no one will sell it to him. Yet, this doesn’t mean that no Jew can do business here. And so, one day a Jew came up with an idea: the Jesus Trail.

Like many other Jewish inventions, this one is also a little complicated, but the short and sweet of it is this: a 65-km Jesus Christ walk, on a path that will take you a few days. What the trail comprises doesn’t really matter, and the Jewish businessman isn’t a Jesus believer to start with, but it will cost you $1,000 or so to compete. People of our day and time like sports mixed with a little spirituality.

Enter journalism. In front of me, at a local hotel’s reception area, stands a man who is taller than Jesus and weighs more than God. He is a British journalist, he tells me, and he is in town to write a special report on the Jesus Trail. I examine him intently: He gets up from his chair, walks five steps to the cake table, which entails a considerable effort as his face immediately fills up with sweat. I say nothing.

He takes the cake and slowly makes his way back to the chair, sweating even more. Should this man even dream of the Jesus Trail? It will take a bigger miracle than Jesus’ resurrection to get him to the beginning of the Trail, not mention to actually compete.

Are you serious? I ask. Are you really, really, planning to do the Jesus trail? You’ll drop dead in the first 15 minutes!

He looks at me, gives me a Tony Blair smile and says: I will, you know, start it.

This man plans to walk no more than three minutes and write one huge, multi-page article about the Trail.

After recovering from my initial shock, I gather all the parts of my brain and think it over.

This fat man is genius, I decide. I should learn his ways and become a British journalist myself!

A few days later I decide to copy the formula. In Jerusalem, I hear, there is a night run. From 9 p.m. to 10:30 p.m. people are invited to run the streets of Jerusalem in a 10-km mini-marathon, which to my ears sounds like a God’s Trail. I will do it British style. I arrive at the place, which happens to be in the German Colony neighborhood, about an hour early to register. Lucky man that I am, I arrive after the registration is closed. Still, I get the gear: a green T-shirt. I put it on and I feel like a winner. Slowly I go to the finish line, pose like the winner of the run, and have photos taken. Photos don’t lie, as we all know — especially photojournalism from Israel.

Problem is, I have another hour to go before this night run even starts and I really don’t want to miss the finish line ceremony. To kill time, I walk the streets when suddenly I see a huge line with hundreds of people in it. If they want to be there, I say to myself, a number-one marathon winner like me should be there as well. I fight my way through and people, funny creatures, forgive my pushing. They see my T-shirt, a respected sportsman, and they cheer me on.

Once inside, I find out that this is a lecture by Rabbi Lord Jonathan Sacks, the former chief rabbi of the United Hebrew Congregations of the Commonwealth.

The Brits are all over this land. Why? Are they trying to restore the British Mandate? Whatever they are up to, I’m not up for them. I learned enough from one Brit, a serious journalist, and I don’t really feel any desire to spend my time with another Brit, even if he is a rabbi.

I get up and walk out to the street. I see no cars on the road and I ask the cops why they are blocking traffic. They tell me that there’s a mini-marathon going on and runners would soon pack the roads. Don’t I know? they ask, looking at my T-shirt.

People pass by me and look at my T-shirt; they think that I’m the first, for real, and they cheer me on.

I realize I have no choice and I must run, if only just to show onlookers how a real pro runs.

I start running. Faster than Jesus.

It’s been quite some time since I ran; jogging is not my preferred activity. But the spirit of the night run catches up with me and I start enjoying it.

No, it’s not easy to run if you haven’t done it in a while. But let me tell you, when you start the engine of your feet there ain’t no stopping you. Even the cats are surprised at my speed. When I find myself breathing too hard, I lower my speed, but I keep on moving.

I finally reach the finish line via a shortcut, behaving like a European journalist before the Israeli police finally get suspicious of my credentials. But at least today I’ve run more than I have in a long, long time.

Tuvia Tenenbom is the author of “I Sleep in Hitler’s Room.” He is currently in Israel working on his follow-up book, “Alone Among Jews.”