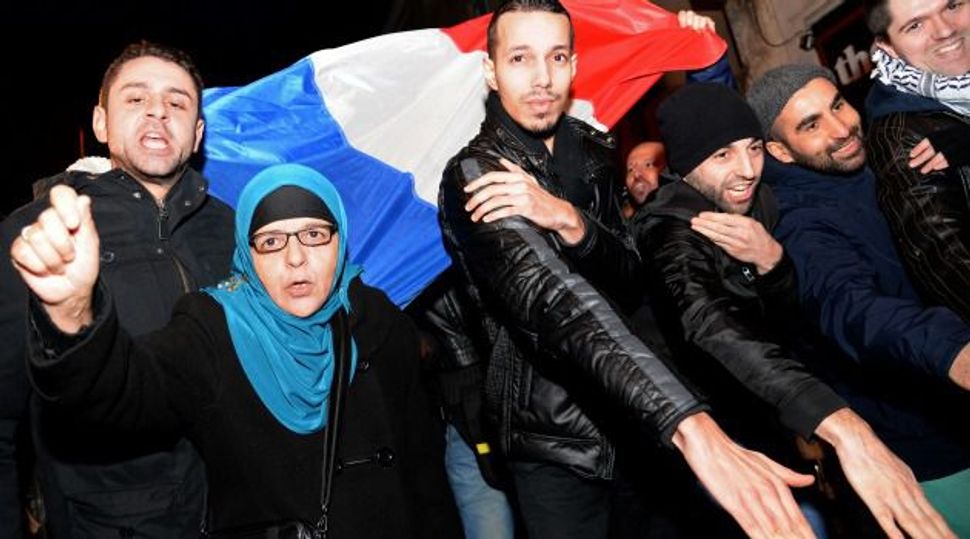 Not So Beau Geste: The controversial ?Quenelle? hand gesture may have its origins in a form of French slang called ?verlan.? Image by Getty Images

By now you may think you’ve heard or read all you want to about the quenelle, the double hand movement that was popularized by the French comedian Dieudonné and has been all over the news since the French soccer star Nicolas Anelka performed it after scoring a goal in a game in England on December 28, 2013. Denounced by its would-be banners as a disguised Nazi salute, and defended by its practitioners as a harmless thumbing of one’s nose at authority, it has turned the traditional debate over freedom of speech into a debate over freedom of gesture.

Let us leave this debate for the editorial pages. Rather, let’s ask, first: Why should pointing one arm diagonally downward with its fingers extended while touching that arm’s shoulder with the opposite hand be considered a Nazi salute? Second: Why should this gesture be called a quenelle, which is the name of a kind of French dumpling? And third: Where did this dumpling get its name?

Let’s start with the last of these questions. A quenelle is a dumpling of ground meat or fish commonly associated with the region of Lyon; traditionally made with a filling of pike, it should have, in the words of one food commentator, “an ethereal melt in your mouth deliciousness mingled with a hint of sustenance, consistency, and richness.” The quenelle was not originally, however, a Lyonnaise dish. The word arrived in France, according to my Larousse Dictionnaire Étymologique de la Langue Française, via Alsace in the 18th century as a Frenchified form of knödl — the same German word for “dumpling” that has given us our beloved Jewish kneydl, aka matzo ball.

There’s no mystery about that. Neither is there much about how Dieudonné’s quenelle got its name. The comedian himself bestowed that on it, when he started using it in his routines nearly 10 years ago. Although the culinary quenelle is generally squat like most dumplings, it sometimes takes a thinner, elongated form that inspired Dieudonné, comparing it to a condom, to coin the phrase glisser une quenelle, to “give the finger” to someone. Applied by him to the gesture he invented, both word and gesture caught on.

But why this particular gesture? This would appear to be a mystery — or anyway, I haven’t been able to find any explanation for it. Permit me to suggest one of my own.

Since at least as far back as the 1970s, French has had a form of slang known as verlan, a word that is a reversal of l’envers, which in the expression á l’envers means “inside out” or “upside down.” And indeed, Verlan works by turning words upside down. If femme means “woman” in French, a woman in Verlan is a moeuf. If a flic is a policeman, than a kuelf, which becomes keuf, is one in Verlan. Almost any word can be reversed in Verlan (or even re-reversed, as when keuf becomes feuk), which is especially widely used by the young and the marginalized — the same population for whom Dieudonné, as an anti-establishment comic, has claimed to speak. Like many such argots, Verlan enables speakers from these groups to feel they are being “cool” (looc in Verlan) by outwitting the “squares” who do not understand them.

And now consider the quenelle. It consists of two movements. One is the stiff arm angled downward, with the fingers outstretched. Is this not a “Verlanization” of the Nazi “Sieg heil!” in which the stiff arm and fingers were angled upward? It is the physical equivalent of saying moef instead of femme.

But, you ask, what about the other movement of the quenelle, in which the hand of the unextended arm is placed on the shoulder of the extended one? This does not appear to be part of an upside-down Nazi salute, which was commonly given, as can be seen in photographs of sieg-heiling Germans, with the arm that was not saluting hanging by one’s side. To “Verlanize” that arm, one would have to hold it up in the air rather than place its hand on the shoulder of the saluting arm.

But wait. Look at photographs of Nazi rallies in which Hitler is returning the saluters’ salutes. Where is his other hand? In all the photographs of him saluting that I have been able to find, it is always in the same place: not hanging at his side, but resting diagonally on his belt or across the bottom of his shirt. A “Verlanization” of this would be precisely to lay one’s nonsaluting hand across one’s shoulder, with the angle formed by one’s elbow identical to, but in the opposite direction of, that formed by Hitler’s.

Was Dieudonné aware that he was “speaking” Verlan when he invented the quenelle? The only one who could answer that question is Dieudonné — if, that is, you could get an honest answer from him. In any case, if he wasn’t consciously “Verlanizing” the Hitler salute, he was following an unconscious pattern of thinking that came from Verlan. A harmless thumbing of one’s nose at authority? You have to be pretty teub (that’s Verlan for bête, which means dumb) to believe that.