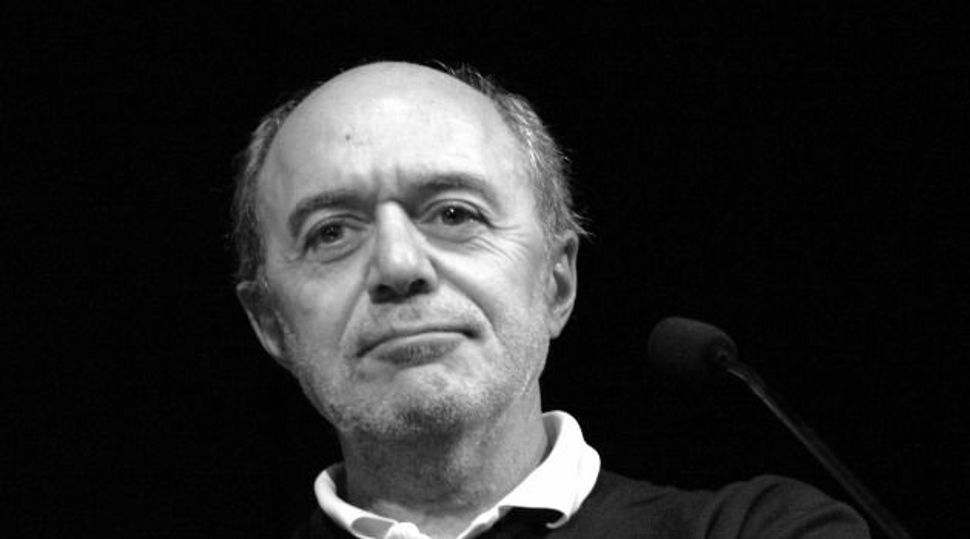 Moral Authority: Pierre Assouline was the first Jew to serve as a juror for the Goncourt Prize. Image by Claude Truong Ngoc

The French Jewish writer Pierre Assouline has long grappled with moral dilemmas resulting from the Nazi occupation of his country. In 2012, he was the first-ever Jew elected as one of the ten jurors for the Goncourt Prize, France’s top literary award meant to encourage young writers, established in 1903.

Assouline’s newest novel, “Sigmaringen,” is set in the Vichy French enclave in southern Germany where after D-Day, French Nazi collaborators fled, including such authors as Louis-Ferdinand Céline and Lucien Rebatet. With a measured and judicious attitude toward writers who make wrong choices, Assouline thrives in the morally complex French literary milieu, as in his 1997 study of the collaborationist writer Lucien Combelle.. He keeps kosher and is married to Angela Yagdaroff, a leading member of the Women’s International Zionist Organization from a Bukharan Jewish family, but as a critic must constantly deal with a legacy of talented writers who hated Jews and Judaism.

Assouline’s “Drouant’s Way: 110 Years of Literary Life at Goncourts’ Place” illustrates his measured, diplomatic approach: It is a lively, humorous account of the Goncourt Academy, a companion volume to a radio series which he broadcasted for France Culture. The title refers to the Drouant restaurant, a watering hole in central Paris where Goncourt jurors regularly meet to discuss prize-related matters.

Assouline points to the paradox that in 1919, one prize juror, Léon Daudet, despite being an anti-Dreyfusard, a royalist, and later a Nazi collaborator during World War II, helped give the prize to Marcel Proust, a Jewish friend from his youth. In 1939, Daudet unsuccessfully campaigned for the honor to go to Madame Simone, who was born Pauline Benda to a French Jewish family. Assouline praises Daudet’s ability to divorce his political beliefs from literary taste as “not just intellectually noteworthy but also revealing a certain courage, for such dissociation is hard to take in both domains.”

Compared to Daudet’s dissociations, the Goncourt brothers, Jules and Edmond, were unilateral in their loathing for everything Jewish, as is detailed in “A Century of the Goncourt,” published by Gallimard by literary historian Robert Kopp. Kopp quotes the novelist Raymond Queneau, a longtime member of the Goncourt Academy, who wrote in 1961: “There is no more appalling reading than the Goncourt ‘Journal.’ It really has a narrow-minded, mean-spirited sensibility, a tiny brain… without even mentioning its anti-Semitism.”

The Goncourt’s “Journal,” routinely considered a masterpiece of French literature, contains many comments similar to these 1891 observations: “I don’t like Jews. It’s a sacrifice for me to greet one… I am openly a theoretical enemy of the Jewish race.” Seeing the Jewish creative spirits among their contemporaries as lacking in stamina, the Goncourts concluded in 1893: “Among the semites, the brain develops only until age 25; with Aryans, the development continues long beyond that stage.” And in 1894 the Goncourts described the representations of Jews in a Paris art exhibit as the “truth of the native Jew, depicting very exactly those big crooked noses, scrubby eyebrows, spreading beards, chary gazes from under heavy eyelids, conniving ideas, evil jocosity, wicked shrewdness, and treacherous, crafty cunningness, all beneath their swollen greasy faces.”

In 2012, the online French magazine Causeur.fr published “They Dishonored Literary Prizes: the Goncourt Prize Must Change its Name!” by Philippe Barret, a political scientist and former French cabinet minister. Barret’s proposal was not adopted, and online commenters complained that France has had so many anti-Semitic writers of note that it would be impossible, and counterproductive, to sanction them all posthumously.

Aware of this unfortunate tradition, Assouline is usually tolerant about what he sees as minor, occasional anti-Semitic peccadilloes by otherwise distinguished subjects about whom he has written, including Georges Simenon and the cartoonist Hergé, who created Tintin. “Drouant’s Way” underlines the positive evolution of the Goncourt Prize from its unpromising foundations to a now-firmly established record of affirming Jewish authors and culture.

Two wartime Goncourt jurors, Sacha Guitry and René Benjamin, were enthused Nazi collaborators. But by 1944, after the tide of the war had turned, Elsa Triolet (born Ella Kagan to a Russian Jewish family) became the first woman, as well as the first Jewish woman, to win the prize.

The next Jewish author was singled out in 1948. Maurice Druon was a Resistance activist and son of a Russian Jewish émigré family (his uncle was Joseph Kessel, a French journalist with whom Druon wrote the Resistance hymn, “Song of the Partisans”). Druon’s novel, “Great Families,” was not imbued with Yiddishkeit, unlike the 1955 awardee, Roger Ikor’s “Mixed Waters.” As Olivier Ikor’s “Memoirs of My Father” recounts, the author of “Mixed Waters,” an inter-generational tale of French Jewish identity, found the fame surrounding the prize a crushing burden.

The following year, another Jewish writer, Romain Gary (born Roman Kacew in Vilna, Lithuania) took more naturally to the whirl of publicity after his “Roots of Heaven” triumphed. By contrast, 1959’s winner, André Schwarz-Bart of Polish Jewish origins, whose “The Last of the Just” told the story of a Jewish family from the Crusades to Auschwitz, was even more traumatized by the spotlight than Ikor had been.

By 1962, it was so accepted to have a Jewish Goncourt winner that when the award went to “The Lost Shore” by Anna Langfus (born Anna-Regina Szternfinkiel in Lublin, Poland), a semi-autobiographical account of a concentration camp survivor, no one was surprised. Some, however, may have wondered whether the subject, rather than the way it was narrated, was being awarded. The themes of Jews, the Holocaust, and the German occupation, still fresh in France, remained surefire prize-winning subjects for novelists.

From that time, however, apart from an inadvertent second Goncourt in 1975 to Romain Gary publishing under a pseudonym, no Jew was honored with a Goncourt Prize until 2006, when Jonathan Littell’s “The Kindly Ones” was honored for exploring the evils of Nazism, if more luridly than by previous Goncourt winners. Assouline notes that some worthies were overlooked, such as Albert Cohen, a Swiss Jewish novelist who died in 1981 at 86, and who was too old to receive the prize when his novel “Belle de Seigneur” was published in 1968”, and Holocaust survivor Georges Perec, who was too avant-garde to please middlebrow jurors.

Instead, in 1991 the Goncourt went to a non-Jewish writer, Pierre Combescot, for recounting the saga of a Tunisian Jewish family in the early 1900s and occupation period in “Les Filles du Calvaire,” named after a working-class Paris neighborhood. With Assouline and his fellow jurors in place, Jewish writers and their narratives, whether dealing with the occupation or not, will continue to be judged for their inherent quality, definitively disregarding the unsavory ghosts of the Goncourt brothers.