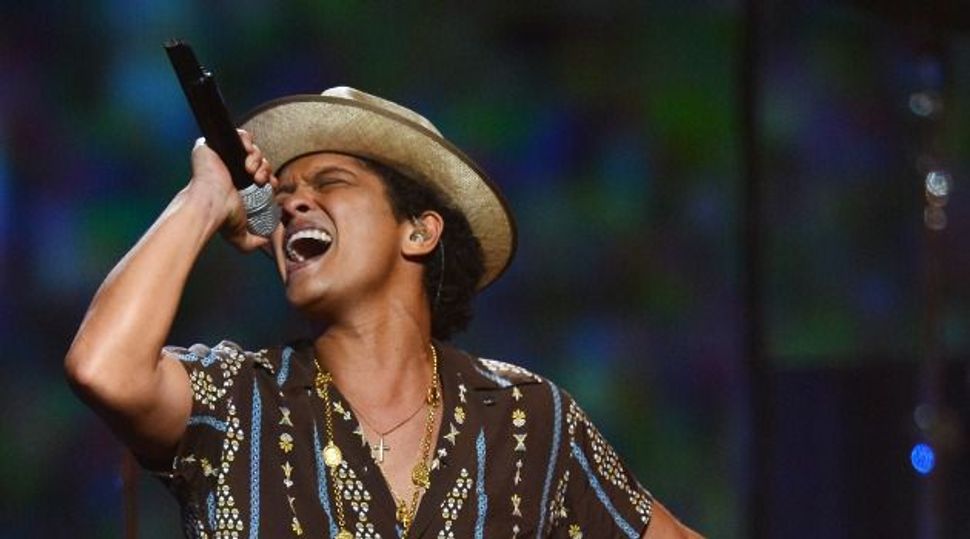 Jewish Men Are From Mars: Bruno Mars, whose Brooklyn-born father is Jewish, will be part of this year?s halftime entertainment. Image by Getty Image

On Sunday, February 2, all across the nation, worshippers will gather around their TV sets to take part in the annual ritual of that highest of American holidays: Super Bowl Sunday.

While outside of Sid Luckman, Jews have yet to make much of an impact on the gridiron, the Super Bowl itself is a lot more than just football; it’s a pop culture phenomenon, an entertainment and commercial extravaganza, and one in which Jews have played a significant role. A couple of years ago, Israeli supermodel Bar Refaeli and Jewish actor Jesse Heiman shocked viewers with a lengthy, luscious kiss for a GoDaddy commercial broadcast during the game. This year, Israeli seltzer machine manufacturer SodaStream has already scored a touchdown by signing up Jewish actress Scarlett Johansson to be its global spokesperson — she’ll make her debut in that role during the telecast of the game, demonstrating how the do-it-yourself seltzer maker works and presumably making SodaStream seem sexy.

For its first three decades, the Super Bowl halftime show was relatively tame, featuring college marching bands, Dixieland jazz outfits, and the inspirational singing group Up with People. But around the turn of the century, the producers of the TV broadcast and Hollywood agents wised up to its potential, and now the program regularly features some of the biggest names in entertainment.

In 2001, Jewish comic actors Ben Stiller and Adam Sandler played a role in the halftime show, as did the rock band Aerosmith, which, as we explained in these pages last fall, boasts a considerable secret Jewish history as well as a Jewish drummer. Paul McCartney played in 2005, Bruce Springsteen in 2009, and we’ve already explored their Jewish cultural affinities at length in these columns. Jewish rock guitarist Saul Hudson, better known as Slash of Guns N’ Roses, performed that band’s greatest hit, “Sweet Child o’ Mine,” in 2011, and Madonna, for better or worse the world’s most famous adherent of Kabbalah, ruled the stage in 2012.

Last year, rhythm and blues star Beyoncé bounced around at halftime in a fabulous dress designed by Austrian-born Jewish fashion designer Rubin Singer. This year’s show will be no exception to the rule: The stars involved are Bruno Mars, Jewish on his Brooklyn-born father’s side, and the rock group Red Hot Chili Peppers, who boast the Jewish guitarist Josh Klinghoffer (a distant relative of PLO terrorism victim Leon Klinghoffer), and two Jewish co-founders — the late Israeli-American guitarist Hillel Slovak, and drummer Jack Irons, who now pounds the skins for the mostly Jewish rock group The Wallflowers, led by Jakob Dylan.

Many people tune into the big game for the TV commercials. The Super Bowl boasts some of the most expensive advertising time on the air, and sponsors typically spare no expense to hire big-name talents to create and direct edgy, innovative and memorable clips featuring big-name celebrities. Comedian Richard Lewis of “Curb Your Enthusiasm” fame has made several appearances in Super Bowl ads, including a 1997 spot for Lay’s potato chips and a somewhat controversial one for Snickers candy bars, in which he appeared in a whiny role with fellow Jewish performer Roseanne Barr, in 2011. Fran Drescher of the hit TV show “The Nanny” hawked Pizza Hut’s new “New Yorker” pizza in 1999, and Pepsi used Bob Dylan’s song “Forever Young” — which in itself is a loose rewording of the Friday night Shabbat blessing over the children — in versions by different singers in 2009. Jewish actor Abe Vigoda appeared with non-Jewish actress Betty White for Snickers in 2010, and was even nominated for an Emmy for his cameo role in the ad. And in 2011, Jewish soft jazz saxophonist Kenny G was a good sport and allowed himself to be mocked in a spot for Audi.

This isn’t to say that Jews haven’t made their mark on the gridiron itself. Brooklyn-born Alan Veingrad, now a Chabadnik who goes by the name Shlomo, was an offensive lineman who helped the Dallas Cowboys reach the Super Bowl in 1993. And Queens-born punter Josh Miller helped the New England Patriots on their way to the big game in 2005.

And of course, had there been a Super Bowl back in the 1940s (the first Super Bowl game was played in 1967), there is no doubt that Sid Luckman would have been a dominant force in the game over the course of a decade. Luckman, who hailed from Brooklyn, studied at Columbia University prior to becoming one of the greatest quarterbacks of all time, playing a dozen Hall of Fame seasons for the Chicago Bears, and leading them to four NFL championships between 1939 and 1950.

Seth Rogovoy is a frequent contributor to the Forward’s arts pages, where he recently explored the Jewish affinities of Bruce Springsteen, Cher, Aerosmith and Paul McCartney.