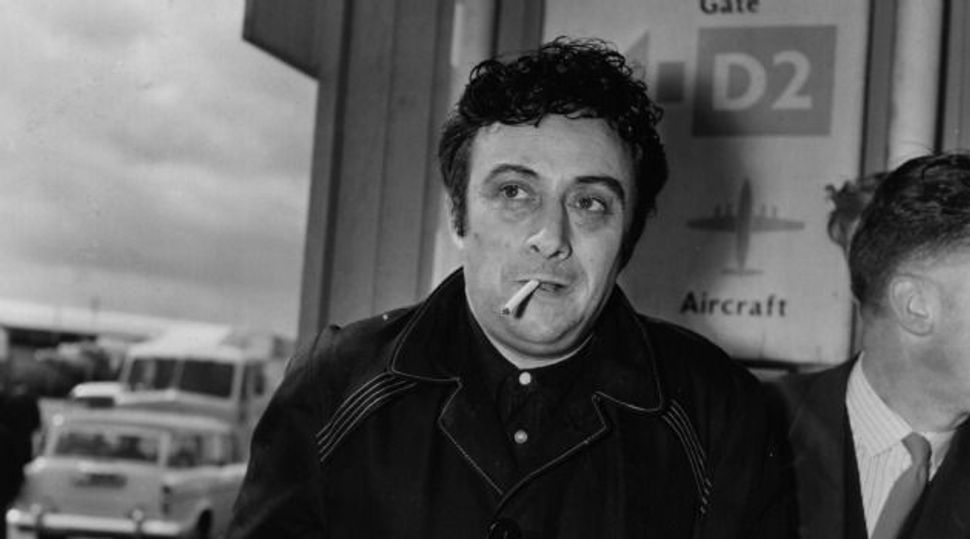 Lenny Bruce Is Gone: The angry refusal of Jewish figures like Bruce to accept the terms the over-culture demanded was as Jewish in character as Henry Roth?s yiddishisms. Image by Getty Images

Among the Jewish traits I am most proud to be historically and culturally associated with is the way my people obstreperously defend our principles even when doing so goes against our best interests. I love the loudmouths and the unreasonably argumentative. I love people who are willing to go to great hyperbolic length to get a laugh or to irritate their opponents. I love the ranters and the hysterics, those who never know when enough is enough. Whether I agree with what they’re saying or not, I always appreciate their compulsion to take things too far. I see it as my birthright to get under people’s skin and annoy them until they want to scream. And one of the greatest rhetorical tools people bent toward this sort of behavior can wield is the well-timed, carefully aimed obscenity.

For this reason, I was excited to hear about “Unclean Lips: Obscenity, Jews, and American Culture,” Josh Lambert’s recently published book on the subject.

“Unclean Lips” is, essentially, an examination of the way obscenity laws have been historically used to legitimize anti-Semitism in America and the notable roles Jewish writers, publishers and lawyers have played in fighting these laws, and by extension, furthering the cause of Jewish equality in American culture. To this end, Lambert studies examples that further his argument and ignores or merely mentions in passing major cases like Henry Miller’s “Tropic of Cancer,” James Joyce’s “Ulysses,” and William S. Burroughs’s “Naked Lunch.”

Moving sequentially through the historical record, he first attempts to explain how “anti-Semitism, both sexual and genteel, has made obscenity seem meaningful and useful, even necessary, to some American Jews.”

He draws a connection between the Comstock laws, which regulated depictions of sex and sexual mores in American society throughout the late 19th and early 20th centuries, and the stereotype of Jews as bigamists, pedophiles and sexual deviants, framing the fight against these laws as a battle against anti-Semitism.

As Victorian prudery gave way to modernist transgression, Jewish writers and publishers were able to exploit the laws for personal gain. Lambert explains: “The publishing of obscenity was one means through which to convert… financial capital into a very precious form of cultural capital. It was… a way of purchasing literary prestige.” Thus Jewish publishers like Horace Liveright pursued books that might provoke lawsuits against them, and most touchingly, a writer like Henry Roth was able to believe that he could transform his shame over a youthful incestuous relationship with his sister into a literary cause célèbre on par with Joyce’s “Ulysses.” The reason he failed, according to Lambert, is because “the book was never suppressed, and so while Roth was never threatened with jail, neither did he receive the speaker’s benefit that was due him.”

The most provocative section of the book examines the way Jewish writers exploited and challenged sexual themes in their work in the decades after the Comstock laws were repealed. For most of this chapter, Lambert focuses his analyses on two books, Philip Roth’s “Portnoy’s Complaint” and Adele Wiseman’s “Crackpot.” “Portnoy” is presented as an allegorical argument against Zionism and “Crackpot” depicts the sexual love between a mother and her son as a transgressive celebration of the imperative to marry within the tribe. His reading of each is informative and nuanced but oddly claustrophobic in its strictly Jewish focus, given his interest throughout the rest of the book in the relationship between Judaism and the larger culture.

When he finally arrives at the present, Lambert brings his argument full circle and looks at the ways that Orthodox Judaism has argued for and modeled a new interest in modesty within American culture, and how in the presence of the resurgent Christian right, secular Jews like Larry David and Sarah Silverman “continue to assert their Jewishness emphatically, in virtually every one of their performances, but also glory in and glorify the use of taboo language… [because] identifying oneself as a ‘dirty Jew’ in the 21st century has become attractive as a means for signaling one’s opposition to… the country’s most powerful social, religious, and politically reactionary movement.”

However persuasive and well-researched Lambert’s case may be, his arguments are buried in plodding prose and humorless academic language. This is not wholly Lambert’s fault. Convention requires the academic in search of a tenured job to state and restate his major ideas, lest the committee not notice they exist, to signify his critical distance from his subject through a dedication to passive sentence construction and tortured syntax, and to prove his authority in his field through the incessant use of jargon.

Though Lambert tries to infuse more muscle and verve into his prose than most academics, we still get sentences like this one:

“Offering a comparative study of two related modesty discourses — early 20th century Yiddish literary modesty and late 20st-century Orthodox Judaism — this chapter demonstrates that modesty discourses follow from and reflect the diasporization of culture, the uncoupling of cultural production from both the constraints and the opportunities of legal control and state support.”

In the proscribed world of academia, that’s fine. But given that the subject has a wider readership, I wish Lambert had loosened up and taken that into account. It takes an exhaustive amount of concentration to extricate the meaning out of sentences like these and however interesting the subject matter may be, one sometimes wonders if it’s worth the effort.

Maybe more problematic, if one cares about the relationship between Judaism and American culture, are the limited and predetermined objectives Lambert presents his Jewish protagonists as having. In these pages, obscenity is first and foremost presented as a tool by which Jews were able to assimilate and gain acceptance by the American cultural elite as well as monetary and societal success, and to enter the “prestige culture” as Lambert calls it.

But what of the other ways in which obscenity can and has been used? What of transgression and dissidence? Obscenity is such a powerful weapon against those who would wish to control our behavior (to say nothing of our imaginations) and villainize us for our culture. And the angry refusal of Jewish figures like Lenny Bruce, Abbie Hoffman and even Al Goldstein to accept the terms the over-culture demanded was as Jewish in character as Henry Roth’s yiddishisms and Liveright’s entrepreneurship through scandal.

To many of them obscenity was a political tactic, a way by which to draw attention to what they perceived to be the greater obscenities of our government’s behavior toward its citizens and others around the world. I would have liked to see what Lambert has to say about the role Jewish heritage played in the antagonistic relationship between these dissidents and American culture.

One explanation for why he shies from doing so is his fear of what he calls the “booster-bigot trap” by which the well-intentioned scholar “[relies] on essentialist visions of Jewishness that mirror those of anti-Semites.” His reservations are understandable, but they place him in a position of having to normalize Judaism and implicitly promote a vision of Judaism that, ironically, given the subject matter, is both culturally and politically conservative.

What’s lost in “Unclean Lips” is the thrill obscenity can create. It’s the sharp dangerous edge of anarchy and when used effectively, it can BLEEP up the most carefully planned cocktail party, smashing all propriety to BLEEP. Lambert’s systematic and earnest exegeses take all the fun out of obscenity. It’s like going to a strip club to find yourself being lectured about heteronormativity and the male gaze by a fully clothed BLEEPer.

Presenting obscenity as a means of gaining access to the domain of polite, civil society seems, to me at least, to miss the BLEEPING point.

Joshua Furst is a contributing editor to the Forward. He is the author of “The Sabotage Café” (Knopf, 2007).