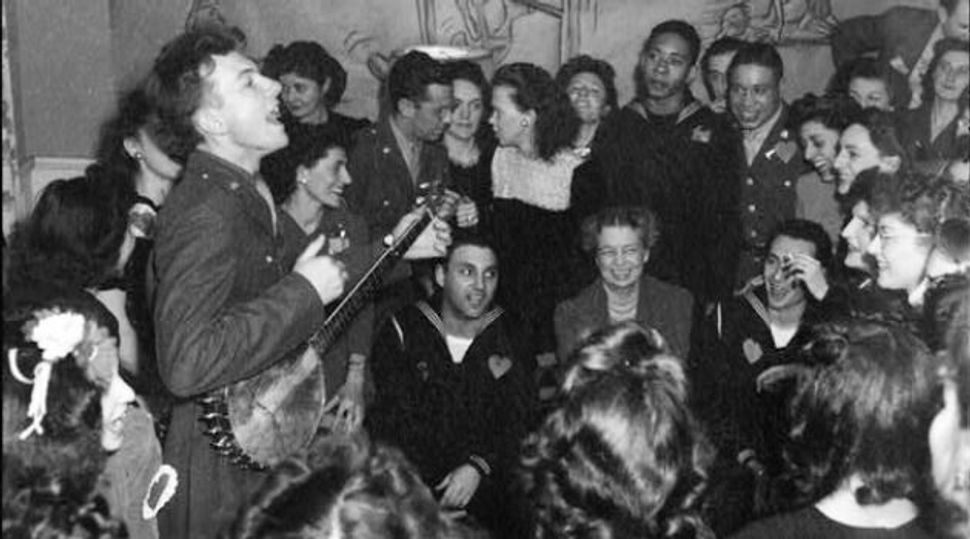 The American folk singer Pete Seeger, who died on January 27 at age 94, is remembered with reverence and affection for popularizing such melodies as the Civil Rights anthem “We Shall Overcome.” (Seeger changed the title from the original “We Will Overcome” on the grounds that “shall” sounds better). Less celebrated is the important role that Yiddishkeit played in inspiring and advancing Seeger’s achievement.

In 1950, Seeger and his vocal quartet “The Weavers” hit the charts with “Tzena, Tzena, Tzena,” an arrangement of a Hebrew song written in 1941 by Issachar Miron (born Stefan Michrovsky in Poland) and Yechiel Chagiz. The original lyrics went, “Go out, go out, go out, girls, and see soldiers in the moshava (farming community).” In the Weavers’ version, the words describe joining a celebration, dancing a hora, and otherwise feting the new statehood of Israel. Then, in key moments for the assimilation and acceptance of Israel in American culture, Lee Hays, the Arkansas-born cavernous bass singer of the Weavers, would step forward and warn the audience that they would be hearing the original words in Hebrew. Seeger, slim as a whippet in middle age, would step forward picking at a banjo and in a New England cracker-barrel accent, sing the folksiest Hebrew imaginable.

Seeger was backed by two other singers in the Weavers who were born closer to the idiom: Ronnie Gilbert (born 1926) a creamy-voiced contralto with the earth mother quality of a soloist in a Slavic choir, natural enough considering that her parents were East European immigrants, garment workers who settled in New York City. The fourth member of the Weavers was Fred Hellerman, born in Brooklyn in 1927 to a Latvian Jewish family. Of the Weavers, Hellerman would have the most lasting artistic ties with Jewish culture, later conducting two hit albums, “Theodore Bikel Sings Jewish Folk Songs” (1958) and “Theodore Bikel Sings More Jewish Folk Songs” (1959). It was Hellerman who suggested the group’s name, after a 19th century play by the German author Gerhart Hauptmann about an 1840s uprising by Silesian weavers worried about being replaced by mechanization during the Industrial Revolution.

No machine ever replaced the Weavers, but they soon broke up after being placed on a broadcast blacklist in the McCarthy era as suspicious radicals. Hellerman fashioned another Israeli song, “Tapuach Hineni” for their 1960 reunion album, “The Weavers at Carnegie Hall, Vol. 2.” This more delicate tune did not reproduce the success of the vigorously joyous “Tzena Tzena Tzena,” which had reached second place on the Billboard charts; it might have been no. 1, but that position was occupied by the record’s A-Side, the Weavers’ “Goodnight Irene.”

Always a free spirit and loose cannon, Seeger quit the group on one occasion, reportedly because the others had agreed to record an advertising jingle for a brand of cigarettes. Yet even away from Gilbert and Hellerman, Seeger’s musical imagination was fired by biblical lore, from “Michael, Row the Boat Ashore,” an adaptation of a song first noted as sung by freed African-American slaves on South Carolina’s Sea Islands, with the River Jordan cited as a symbol of freedom for slaves as it was for the Israelites before them.

Even more remarkably, Seeger’s 1950s song “Turn! Turn! Turn! (to Everything There Is a Season)” is a rare example of a pop song which is a close transcription of the Old Testament, using the Book of Ecclesiastes plus some Seegeresque interjections about peace still being possible. Much later, on his CD “At 89,” Seeger included his 1983 lament, “Ode to a Composer (Bach at Treblinka)” set to a 1973 poem by Yuri Suhl. The brief verse, ironically describing how music was played in concentration camps and Bach was “dragged to Treblinka where murder and music go hand-in-hand,” was penned by Suhl, a novelist, biographer, and preserver of Yiddish culture who died in 1986 at age 78.

Despite this record of persistent inspiration, Seeger was targeted over the years by right-wing critics, first for participating alongside Woody Guthrie and others in a 1941 isolationist, anti-war recording made before Pearl Harbor. Although Seeger quickly changed his mind (as did Guthrie), later writing and recording war songs to fight Fascism in Europe, his pacifism was genuine and longstanding. His father the musicologist Charles Seeger was fired from the University of California at Berkeley in 1916 for opposing U.S. entry into World War I, while his uncle was the poet Alan Seeger (“I Have a Rendezvous with Death”), killed in action during the Battle of the Somme while serving in the French Foreign Legion.

Seeger has also received flack for not overtly opposing Stalin sooner than he did, which he subsequently apologized for, and even wrote a song to express his remorse. Some of his political stances were controversial, as when he donated a portion of his royalties to the Israeli Committee Against House Demolitions, a nonviolent organization opposed to wrecking Palestinian homes in East Jerusalem and elsewhere. Yet few, except perhaps the Koch brothers, could carp when Seeger took the stage for his last concert in September, 2013 to benefit the Farm Aid organization, with new anti-fracking lyrics for “This Land is Your Land.”