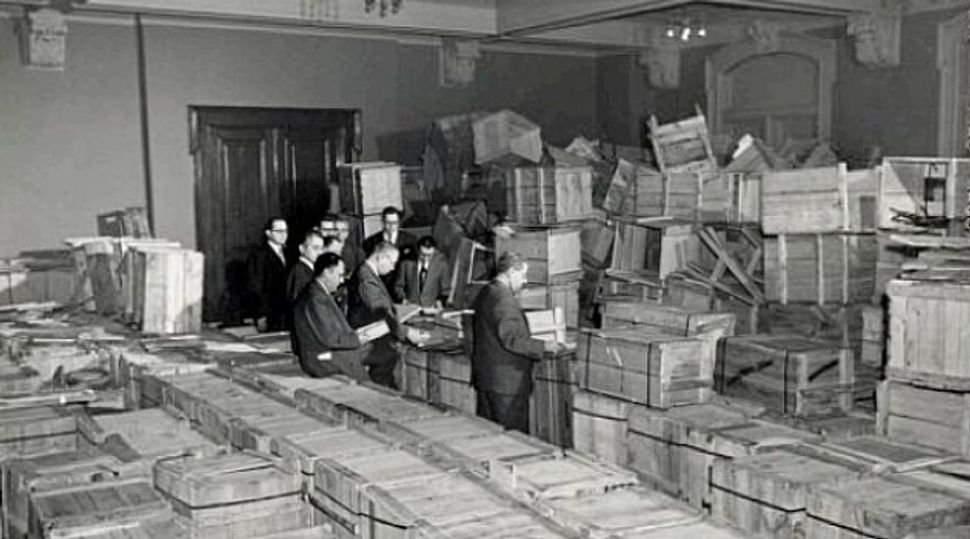 George Clooney may never have worked in the archives of the YIVO Institute for Jewish Research, a Jewish academic organization dedicated to studying and preserving the culture of east European Jewry, but his new film, Monuments Men, portrays a group of soldiers who was very much responsible for saving and securing a significant portion of YIVO’s archives that had been stolen by the Nazis.

These American brigades, known as MFA&A (Monuments, Fine Arts, & Archives) stealthily traveled through wartime and postwar Europe searching for the huge numbers of cultural materials the Nazis had expropriated. In a strange twist of fate, the YIVO building in Vilna became a collecting point for Nazi plunder.

The first Jewish academic institute of its kind, YIVO was founded in Vilna (now Vilnius) in 1925 as a Yiddish research academy that focused on the study of Eastern European Jewry — then the largest Jewish community in the world. During its existence from 1925-1940, it amassed the largest collection of Jewish ethnographic and scholarly materials in the world, and functioned as a kind of Yiddish university in a region where academic study of Jews was unusual. But as the Nazis marched into Vilna in 1941, it all came crumbling down.

After the Nazis occupied Vilna, they commandeered a local building to serve as the headquarters of the Einsatzstab des Reichsleiter Alfred Rosenberg, a Nazi bureau charged with raiding archives, libraries, and museums for valuable books, documents and works of art. The building they took over ironically happened to be YIVO’s.

As cultural treasures stolen by the Nazis from all over eastern Europe began to pour into the Vilna offices of the Rosenberg task force, the Nazis needed multilingual scholars to sort the mass of material. To this end, they forced Jews from the Vilna ghetto to select the books, documents and artworks and prepare them for shipment to Germany. The rare and valuable Jewish materials selected by them were to become primary source materials in a Nazi-run, Frankfurt-based, “Institute for the Study of the Jewish Question.”

These Jews, scholars and writers among them, understood that YIVO’s archives, which were still in the building, were in danger. As a result, some of them decided to hide books and documents among the materials being shipped to the Reich, where they thought they would survive the war.

Others feared what might happen to the Jewish materials in Germany and some them smuggled archival material back into the ghetto, where it was hidden and would hopefully be retrieved after the war. Ghetto residents called these scholars and writers who would return each day with archival documents under their clothing, the “Paper Brigade.”

Sadly, most of those who performed these dangerous tasks did not survive.

Avrom Sutzkever and Shmerke Kaczerginsky, both poets and members of the Paper Brigade who did manage to escape, returned to the site of the Vilna Ghetto after the war and managed to find some of the materials they hid. Less than two weeks after the Nazis retreated from the city in July 1944, the two poets created a Jewish Museum. The first of its kind in Eastern Europe, the museum became the address for hidden Jewish materials. Twenty tons of YIVO materials were found at a paper mill. More was found at a trash depot. Those who had hidden Jewish materials sent them to the museum.

After the war’s end, the YIVO materials that had been sent to Frankfurt by the Rosenberg task force were found in the Offenbach Archival Depot near Frankfurt by soldiers who were part of the “Monuments Men.”

In 1946, Simon Rifkind, Advisor on Jewish Affairs to General Eisenhower, appointed one of these “Monuments Men,” [Seymour Pomrenze(http://www.monumentsmenfoundation.org/the-heroes/the-monuments-men/pomrenze-col.-seymour-j.), who had worked at the US National Archives, in charge of this trove of valuable Jewish archival materials. The material had already been seen by the scholar, Koppel Pinson, who was working as the education director of the Joint Distribution Committee. Pinson wanted to help Jewish survivors by providing books to DP camp libraries in the American Zone and had received permission to remove 25,000 heirless, non-valuable books for distribution to DP camp libraries.

Rifkind and Pinson were concerned about the care of the millions of books, manuscripts and ritual objects that comprised the material at Offenbach. Lucy Dawidowicz, a scholar who had come to Europe at Pinson’s behest to work for the JDC, jumped at the chance to work with the Jewish materials at Offenbach, initially to locate more non-valuable books to send to DP camp libraries.

As Dawidowicz sorted through the materials, she began to identify those that belonged to YIVO. “I had a feeling akin to holiness, that I was touching something sacred,” she wrote in her memoir of her YIVO experience, From That Place and Time. “Every surviving book from that world had become a historical document, a cultural artifact, specimen, and testament of a murdered civilization.”

Among the materials Dawidowicz found that belonged to YIVO included bound periodicals, books with YIVO accession numbers, some inscribed in Yiddish or Hebrew to the YIVO, others had YIVO founder Max Weinreich’s distinctive handwriting in the margins. Among the mountains of books and documents were irreplaceable archival collections on the history and ethnography of Jews in Vilna, material on Yiddish language and literature, photographs, music collections, and communal records, to name just a few. It was a bitter reunion for Dawidowicz, who had studied at the prewar YIVO. “The smell of death emanated from these hundreds of thousands of books and religious objects – orphaned and mute survivors of their murdered owners,” she said.

Dawidowicz also found the books of the famed Strashun Library of Vilna, a massive collection of valuable rabbinic volumes and other works. Dawidowicz recalled that there had been an attempt in 1940 to try to get the YIVO and Strashun Libraries from Vilna to New York and made note of this fact to MFA&A. Now that the Strashun Library was an heirless collection, it was argued that it should travel together with the rest of the collection to to YIVO in New York. After enlisting Pomrenze to negotiate with various authorities, among them the State Department, the materials were packed in 420 wooden crates, and placed on a train under armed guard to Bremen. In June, 1949, the remnants of the Vilna YIVO and the Strashun Library were loaded on the American ship, S.S. Pioneer Cove and sent to begin a new life in New York.

The YIVO building was completely destroyed during the war, so it is miraculous that these archives survived at all. George Clooney’s film doesn’t recount the YIVO story, as it is but one of the many archival rescues made by the 300-plus soldiers of the MFA&A. But what’s remarkable here is the survival of Jewish cultural artifacts in the midst of the Nazi terror and the catastrophe of WW II. With their own survival in question, the Jews of the Paper Brigade desperately wanted to ensure the survival of their cultural heritage. With the help of the Monuments Men, they succeeded.