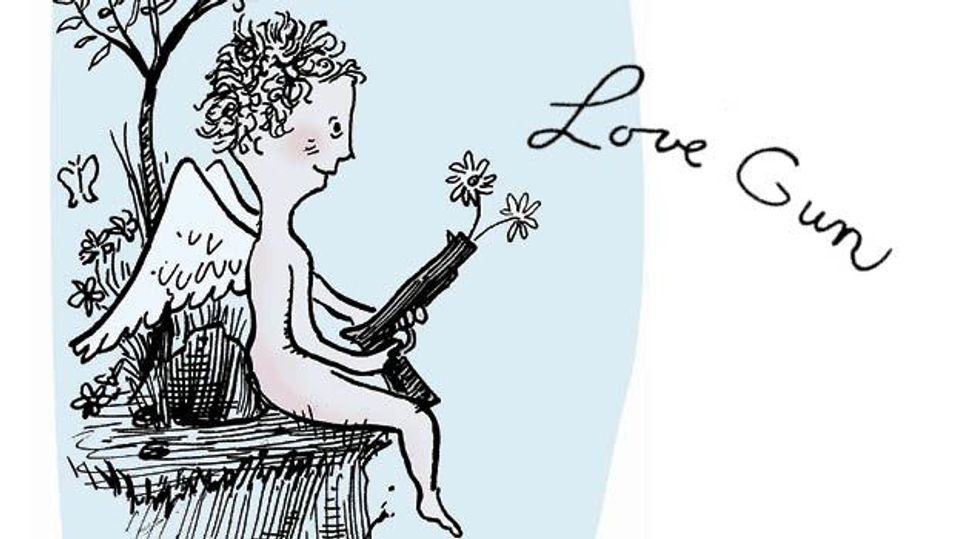 Begun over 1500 years ago as a Roman liturgical commemoration of Christian martyrs, Valentine’s Day has gradually expanded in scope over time to become an all-inclusive celebration of romantic love. (Though martyrdom can of course still be involved, should you fail to live up to the expectations of your significant other on February 14.)

With millions of love songs out there vying for your attention, putting a proper Valentine’s Day playlist together can be a daunting task. So to help you out, here are 10 surefire slabs of musical romance, all of which have the added bonus of boasting notable Jewish connections.

The Turtles — “Happy Together” Led by Howard Kaylan and Mark Volman, two nice Jewish boys from Westchester, Calif., the Turtles were one of the best (and most underrated) American bands of the 1960s. While the myriad delights of their discography remain largely slept on to this day, this sunshine-drenched 1967 ode to romantic bliss has rightfully attained classic status.

Herb Alpert — “This Guy’s In Love With You”
Love songs rarely come with as impeccable a Jewish pedigree as this 1968 chart topper, which was penned by the brilliant songwriting team of Burt Bacharach and Hal David, and sung by fellow tribe member Alpert. They rarely come as superbly smooth as this baby, either.

Neil Diamond — “And the Grass Won’t Pay No Mind”
The ongoing struggle between Diamond’s moody loner and bare-chested love man personas remains one of the most fascinating aspects of his immense song catalog, but the love man wins out big-time on this seductive 1969 album cut. Along with “Sweet Caroline,” “And the Grass…” was one of two songs by “the Jewish Elvis” to actually be covered by Elvis Presley.

Jay and the Americans — “This Magic Moment”
This Brill Building classic, penned by Doc Pomus and Mort Shuman, was originally a huge hit for the Drifters in 1960. But Jay and the Americans’ 1969 version adds an extra dollop of sigh-inducing sweetness to the song — and, given the Hebraic heritage of most of the group members, an extra landsman layer, as well.

The Raspberries — “Ecstasy”
Eric Carmen is his name, and priapic, nostril-flaring anthems were his game — at least back in the early ’70s, when this Jewish rocker fronted Cleveland power-pop legends the Raspberries. Though he would take a mellower and more lucrative path with subsequent hits like “All By Myself” and “Hungry Eyes,” this 1973 single demonstrated Carmen’s innate genius for combining teenage lust with Who-esque guitar chords.

KISS — “Love Gun”
Subtlety has never been Chaim Witz or Stanley Eisen’s strong suit, at least within the context of KISS, the grease-painted rock outfit they’ve been fronting for 40 years under the names Gene Simmons and Paul Stanley. But hey, sometimes the direct approach pays off — as it surely will when you serenade your valentine with the title cut from KISS’s 1977 album.

Ramones — “I Want You Around” Underneath the shades, the ripped jeans and the motorcycle jacket, Joey Ramone (née Jeff Hyman) was just a nice Jewish boy from Queens who was heavily influenced by the sounds of 1960s girl groups. Featured in the band’s 1979 film “Rock ‘n’ Roll High School,” “I Want You Around” may be the quintessential Joey ballad, one that stays true to the Ramones’ straightforward legacy while letting him wear his vulnerable heart on his leather sleeve.

Amy Winehouse — “There Is No Greater Love”
The most famous Jewish vocalist of the early 21st century tended towards the dark and quirky in her own songwriting, but she could also nail a standard with nary a trace of archness. Composed in 1936 by Isham Jones, with lyrics by Jewish songwriter Marty Symes, “There is No Greater Love” is one of the most romantic jazz ballads ever recorded, and Winehouse’s 2003 version holds its own with previous renditions by Billie Holiday, Dinah Washington and Jimmy Scott.

Slim and Slam — “Matzoh Balls”
Okay, so it wasn’t written by Jews, nor is it romantic in the traditional sense, but this 1939 swinger speaks to both jazz great Slim Gaillard’s deep affection for Jewish culture (he also penned the immortal “Dunkin’ Bagel”) and the perfect pairing of matzoh balls with gefilte fish. “Now you put a little horseradish on it, and make it very mellow,” Gaillard advises, “because it really knocks you out.” Just like love, in other words.