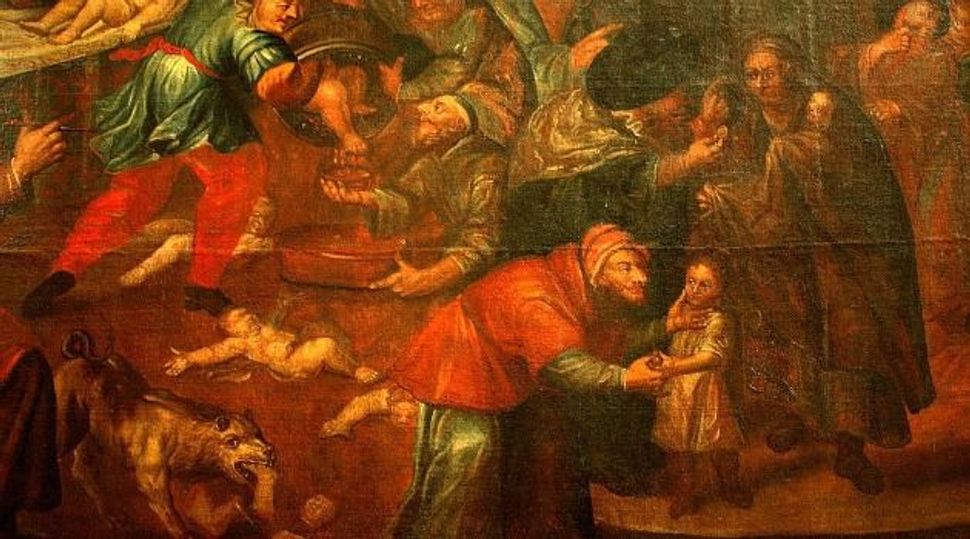 An Ancient Libel: The case of Menachem Beilis brings to mind a history of anti-Semitic myths and slurs. Image by Wikimedia Commons

● A Child of Christian Blood: Murder and Conspiracy in Tsarist Russia: The Beilis Blood Libel
By Edmund Levin
Schocken, 362 pages, $28.95

A little more than 100 years ago, an innocent man was about to go on trial. His alleged crime: the murder of a 13-year-old boy two years earlier, found dead of multiple stab wounds in a Kiev cave. The man was Jewish. The boy was not. The crime, as portrayed by many with a larger, cynical agenda, carried echoes of the Middle Ages, when Crusaders accused Jews of blood libels on a disturbingly regular basis. Those who protested publicly, and the many more who did so privately, knew full well the man had not killed the boy. But the fix seemed in. And even the not guilty verdict brought with it a permanent, anti-Semitic sting.

So goes the rough outline of the case of Menachem Mendel Beilis, a 30-something, unassuming father of five charged with the murder and ritual blood draining of Andrei Yuchinsky, even though there was no direct or circumstantial evidence linking Beilis to the murder. The obvious injustice attracted international attention akin to the Dreyfus case, and when Beilis died in 1934, a free but poor man in America, more than 4,000 people attended his funeral.

And yet, the Beilis case hasn’t resonated with younger generations as has Dreyfus or another parallel example of egregious judicial error, the murder accusation and lynching of Leo Frank in Atlanta. The controversy arising from Bernard Malamud’s rewriting of the case as fiction for “The Fixer” — which rankled many for its mean and crude portrayal of Beilis’s stand-in — is nearly 50 years old. To the surprise of Edmund Levin, a writer and producer for “Good Morning America,” the last book on Beilis had been written in the 1960s, and the last one that relied on primary sources was written 30 years before that.

The result of Levin’s research, which involved mining newly accessible archival materials (with the help of two Russian translators) is “A Child of Christian Blood,” a thorough and necessary account of the ins and outs of the Yuchinsky murder. It shows how “the corrupt and decadent Russia of Tsar Nicholas II was pervaded by a violently paranoid fear of ‘Jewish power’” — and how, in the face of a child murder that would shake the Empire to its core, Czarist Russia needed an easy scapegoat.

Levin’s retelling of the Beilis case shows the reader the venal mentality that permeated Czarist Russia, from Kiev street gangs to opportunistic government agents looking to curry favor with their superiors, to the Czar himself whose “obsession with a pure Russia foretold a monarchy that was losing all sense of reality and becoming susceptible to fantasies of the darkest kind.”

At first, Yuchinsky’s murder was looked upon as a family affair, in keeping with police beliefs, regardless of country, that family members are the most likely suspects. But Evgeny Mishchuk, Kiev’s chief of police, was so blinded by this theory that it negated his ability to investigate the crime, and opened the door for talk of ritual murder and blaming the Jews.

Attention focused on Vera Cheberyak, whose criminal control of gangs and outlandish personality seems to belong more in a noir novel than in real life. Plenty of evidence arose that she ordered Yuchinsky’s death, or at least had a hand in it, and she was even arrested for the murder. But after her release, improbably, she ended up in cahoots with the prosecution, whispering of conspiracy and ritual murder and Menachem Mendel Beilis in their willing ears.

The Yuchinsky murder also attracted the attention of Nikolai Krasovsky, once the acting chief of Kiev’s criminal investigation division and, based on Levin’s description, prime material for a book of his own. Krasovsky was once “celebrated as the Sherlock Holmes who solved Kiev’s most sensational crime” of the multiple stabbings of a middle-aged couple and three acquaintances, who had “fair mastery of forensic science” “great powers of observation” and was a “master of interrogation.” But deductive reasoning would provide little balm for Krasovsky, who went with government-ordered reluctance to work on the Yuchinsky case, only to be undone by his own blind spots. Still, as Levin demonstrates, the level of reputation ruination heaped upon Krasovsky, whose insistence on independent, if wrong-headed, investigation caused angry higher-ups to trump up corruption charges again him, is another example of shocking overkill and incompetence.

There are so many appalling moments in “A Child of Christian Blood” that it’s difficult to list just a few: the slow-on-the-uptake American Jewish response; the cynicism of government officials like Ivan Shcheglovitov, the minister of justice, peddling ritual murder for political gain; and the structure of Russian trials, where witnesses can accuse each other on the stand, which led to dramatic fireworks involving Cheberyak undone by her constant lying.

The only balm to the persisting outrage of the Beilis case is the number of advocates he had, even though, during his years-long wait for a trial in jail, Beilis himself was never fully aware his supporters. From Nikolai Karabchevsky, drafted by the defense team to display the Clarence Darrow-esque prowess that made him famous in Russia, to Vladimir D. Nabokov (the author’s father), whose pro-Beilis column at the beginning of the trial helped sway public opinion, to writers like Arthur Conan Doyle and H.G. Wells willing to speak out on the international stage, Beilis was not completely alone, even if, post-trial, he could never really adjust to life in Palestine first, and then in America.

Just when one might be overcome with the many turns of the story, Levin recapitulates an intriguing theory, based on a paper published in the 1990s, explaining who might have been responsible for Yuchinsky’s death. The plausibility and simplicity of this theory makes further mockery of the horrible pageantry of the Beilis case, underscoring the sense of doom that everyone got it wrong.

The Beilis story, were it fiction, would be accused of having too much plot and less than believable characters. But because it is true, Levin’s main task is to keep up with the intrigue and present it in such a way that the reader never loses sight of the overall impact. He does so splendidly, albeit with a hole missing at the center of the story: why the Czarist regime needed Beilis as a scapegoat.

While it may not be possible to have a Grand Unified Theory of the Beilis case, perhaps the rising fears of the fin de siècle — which would come to pass with the 1917 Revolution and the Romanov family’s execution the following year — more than suffice as motive. If so, then Levin has also shown us our dark future, how latter-day belief cultures that value fear over reason, intuition over deduction, and virality over skepticism could produce yet more outrageous outcomes for innocent people.

Sarah Weinman is the editor of “Troubled Daughters, Twisted Wives: Stories from the Trailblazers of Domestic Suspense.”