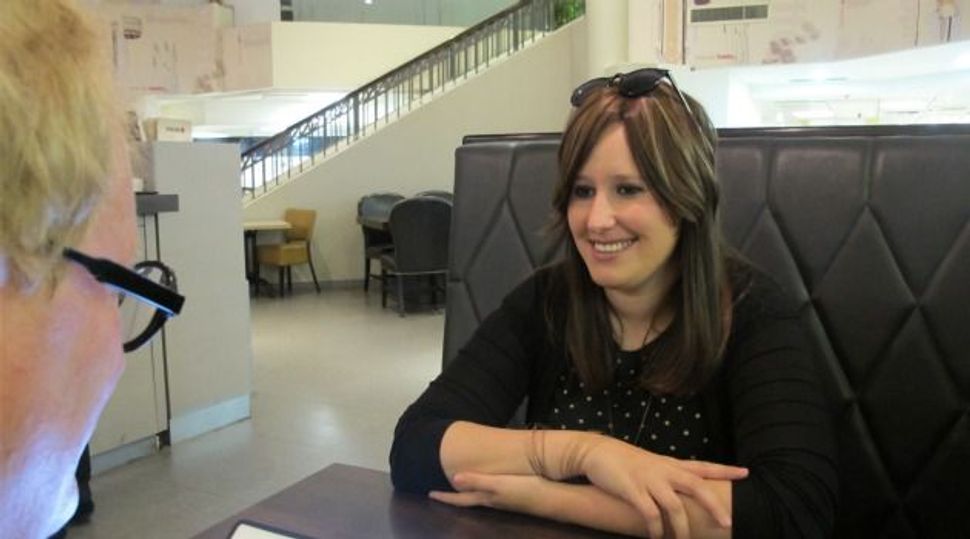 Racheli Ibenboim is a Haredi lady of the Gur dynasty, one of the most fundamentalist branches in the hasidic world. The Gur people, for one reason or another, are ever busy with ever more rules forbidding more and more “sexual temptations” of whatever kind. For example, not long ago a new prohibition was announced: A father shall not dance with his little kids at public events. Kids, apparently, have been declared to be sexual temptations. In the old days, only women were the “temptation” of the Gur hasids.

A few months ago, Ibenboim was the Jewish Home party candidate in Jerusalem’s municipal elections, but she was reportedly pressured to withdraw. Luckily, no rabbi knows that I’m in town and no rabbi has forbidden Racheli from meeting me — a man.

READ: Racheli Ibenboim’s story is far more than what she did on her wedding night.

A man, God has said long ago — in case you didn’t know — shall never talk with a woman who is not his wife or mother. In addition: A woman, as every child of God knows, never shakes hands with men, unless he is her husband and she is not on her period.

Yet, when we meet and I offer Ibenboim my hand, she takes it.

Did she lose her marbles? Did she fail to notice that I am a man? I have no idea, and I’m very intrigued. And so, I ask her.

“Tell me, Racheli: How come a Gur woman offers her hand to a man?”

“I am a member of the President Peres Youth Forum, a place where there are many events attended by many people: Goyim from all over the world, people of all colors and shapes, and I had a big conflict because on such occasions people shake hands all the time. I was thinking about it and I made a rule for myself: I will shake hands with men I meet in official affairs, provided I don’t know them personally.”

The rationale, she explains, is grounded in the ultra-Orthodox tradition, not something she has made up. She gives me an example: “Haredi women, when they board a bus, pay the fare by giving money to the driver, into his hands.”

Wow! Drivers are men and I should be treated like a driver. Or a goy. I love it!

“Tell me more about yourself,” I say.

“I was born in Tel Aviv,” she says. “I was the youngest kid. I think I was born by mistake. My brothers were much, much older than me.”

Her father was in the business of importing porcelain from Bavaria and she was given much freedom, “within limits,” to do what she pleased. She became an activist within her own sect. She arranged forums and events, and seems to have ruled her peers.

“At the age of 18 and one month I got engaged,” she said. “It was like in the movies, really: We got engaged after meeting each other for less than 20 minutes. Let me say this: We were engaged less than 24 hours from the first time that I heard his name, and after less than 20 minutes of talking to him. Seven months later we got married. By the way, during these seven months we never met or talked, not even on the phone. He is one of 14 children. And I remember, when I was at his family’s house and I looked at them, asking myself: Which of them would I like to marry? My answer was: None. This, of course, was a little problematic. Luckily, my husband, as I found out later, is a very impressive man.”

“May I ask a question, the sort of question all idiots would ask of you?” I say.

“Yes. On one hand it was very confusing, but on the other hand I knew I was not the only one going through this; every girl goes through this. All my friends go through this. This is something that you are prepared to go through; it is a natural part of life, something very normal. It is accepted and expected in the world that I am part of. But I was very curious. I was asking myself: Who is this man that I got? What is he?”

“How does something like this work in practical life? You never touched the man and now — how does it feel?”

“Technical on both sides?”

“It is just one of those things that we have to go through. There is the event of the wedding in public, and then an event in private. A series of events, one after the other. That’s it. And after this, everything changes. I left my parents’ home and then I had to cover my hair, to wear a wig. The wedding day is the one day in your life when so much of your life changes.”

She ponders what she had said, pauses a bit, and then asks: “Okay? Have we finished this chapter?”

“Not really,” I say. “What happens the day after?”

“Like a show on stage. It takes time to adjust. So many changes. But at the end you make peace with it, with your new life.”

“What about love? When do you start loving each other?”

“I see that you want to know things that —”

“You are a special woman, and that’s why I don’t let go of this topic.”

“Special woman?” she asks. “I will answer your question. When I got engaged, I went back home and I started writing a journal. I wrote: ‘Today I was given a gift, a gift that is fully wrapped and I don’t know what it is. Worse yet, I don’t know what I would like the gift under the wraps to be.’ This is what I wrote and this paper accompanied me for the seven months of our engagement period. I also wrote what I expect of him, how I wanted our marriage to be, that I wanted him to be the best friend I ever had. I wrote about my fears, my doubts. Everything. When we got married there was a big distance between us, as you would expect of two people who never really talked to each other, but two weeks after our marriage the ice between us melted because of my journal. I made him sit next to the computer and I made him read my journal. He, a hasidic man who at that time had communicated only with men, read a document written by a woman. Women dig deeper, unlike men, and this was his first time to face such a thing. For him it was like — bomb! — a real slap on the face. It forced our relationship in a totally different direction, and because of that we started to talk, and together understand the meaning of our marriage, what we would like to become, what we are. When I started writing that journal I didn’t know what I would do with it, I didn’t think in these terms, I just wrote for myself, but it ended up shaping our life together, forming our relationship in a way that would not be possible otherwise. This is my story, my life story. I don’t know what happens to other people, other girls.”

“No, I’m not. I am just different. I challenge my society, but I’m not a rebel. I love the world of Hasidism. Many things in it. There’s much magic and beauty in the world that I came from. My society is the ‘real’ Judaism, keeping values that did not change for untold number of years. My society signifies truth, a truth that doesn’t change with the years or with the moods.”

“You ran for office and later dropped out of the race. You were threatened. What were the threats?”

“The rebbe (leader of the community) as well?”

Tuvia Tenenbom is the author of the Der Spiegel bestseller “I Sleep in Hitler’s Room.” His follow-up, “Alone Among Jews,” will be set in Israel where he filed this report.