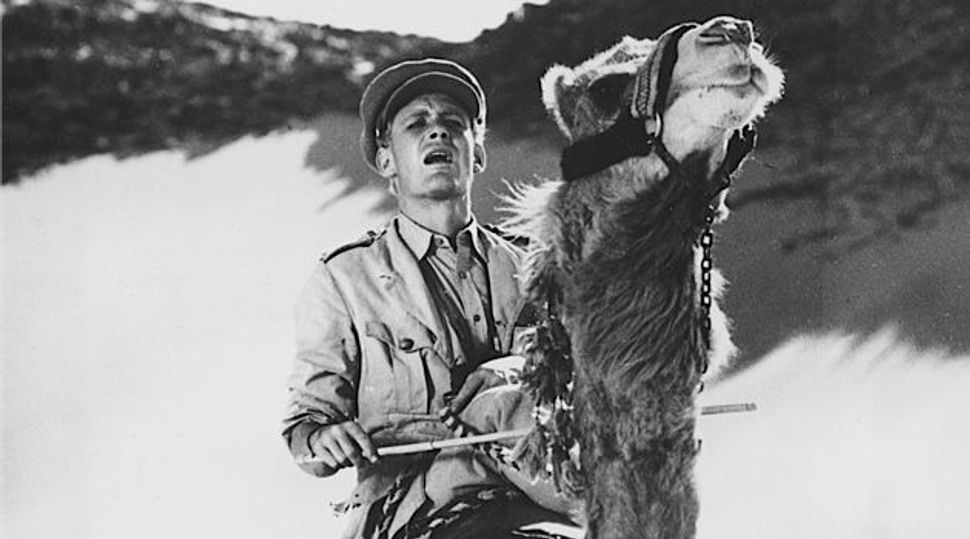 Stretching the Truth: Lawrence of Arabia was really 5-foot-1 and did not look much like Peter O?Toole (above). Image by AP Photo

It is depressing to read so many articles decrying the historical inaccuracies in recent movies, whether dealing with outer space, the southern slave trade, Somali pirates, or Walt Disney, articles in which the least deviation from the historical record or “reality” (a word Nabokov insisted routinely belongs within quotation marks), is held up against the popcorn experience.

The Italians have a phrase, si non e vero est ben trovato, which roughly translates as “if it isn’t true, it ought to be.”

Unless specified as a documentary (in which case a reasonable fidelity to fact can be anticipated), it is well to remember that what we term feature films are stories intended to be viewed as stories. Even when they begin with such disclaimers as “based on a true story,” or “inspired by a true story,” such films are putting the viewer on notice that the truth has been dramatized, i.e. made more exciting, that liberties have been taken, characters combined and possibly dates conflated, etc. — what Huckleberry Finn memorably called “stretchers.”

To come along after and point out these liberties as if they were faults is to misconstrue the nature of fiction. Sooner or later, all fiction is fact distorted. Whether we are talking Moby Dick, Emma Bovary, Coleman Silk, Huckleberry Finn or Achilles, all fictional trails lead back to fact, whether those origins are apparent at first blush or not. And there is always an agenda — the author’s. He or she may wish to advance a political view, a philosophical conviction, or merely to improve on reality, but all fiction is reality reassembled and movies are fiction.

On paper, we understand that in a volume labeled biography or history, a presumably sincere effort has been made to truthfully relate what has happened (though interpreting the meaning or significance of that truth is inevitably the author’s subjective prerogative).

When liberties have been taken in a tale with historic roots, the book is labeled a historical novel. Reading such a novel, we understand that real events have been recombined, manipulated and very possibly distorted so as to make the story more thrilling, more “romantic,” more “satisfying.” It didn’t happen this way, the author allows, but perhaps it should have.

Movies, it seems to me, should be judged by the same criterion. In David Lean’s masterful epic, “Lawrence of Arabia,” Lawrence’s men cheer him when he returns from the desert, having single-handedly ventured back into that treacherous sea of boiling sand to rescue the unfortunate Gassim. With this act of derring-do, Lawrence’s reputation is cemented, his heroic leadership role assured.

In fact, as I have learned from Scott Anderson’s non-fiction account, “Lawrence in Arabia,” Lawrence (not the willowy 6-foot Peter O’Toole, but the fireplug 5-foot-1-inch reality), was greeted with rage and derision by his troops, for having foolishly risked his life as their leader in pursuit of a worthless ruffian. Which version makes a better scene?

Lawrence may be the wrong height in the movie, but the imperial Western powers’ land grab in the Middle East, laying the groundwork for today’s mess, was spot on.

It is reasonable for reasonable people to call attention to gross distortions or omissions on the part of filmmakers, just as it is reasonable for historians to call into question Shakespeare’s version of Richard III, but pointing out that Captain Phillips may have brought disaster on himself by sailing too close to shore doesn’t diminish what ensued. Regardless of Phillips’s course, the pirates — and their motives — were out there. The movie got the big part right.

Walt Disney may have been an anti-Semite (he had a funny way of showing it; the greatest live-action film he ever made was directed by and starred Jews), but regardless, his anti-Semitism doesn’t figure into the story of obtaining the rights to “Mary Poppins” any more than do the details of his sex life, so why fault “Saving Mr. Banks” for failing to depict either?

It is perhaps inevitable that films which deal with recent events should be more closely scrutinized by those whose memories of those events remain fresh, but it is still well to bear in mind that we’re critiquing fiction. You can take issue with “Gravity,” but why bother with its technical “errors” when its sexism is more troubling?

From time immemorial, we make up stories to please ourselves with the telling. Yes, the Greeks probably sacked Troy for the gold, but is there any profit in picking holes in Homer’s (alright, Marlowe’s, if you’re going to be that way) version that includes the face that launched a thousand ships?

In his swell film of Shakespeare’s “Richard III,” Laurence Olivier’s prologue concedes in essence that Shakespeare’s Richard is not that of history. Should someone now come along and trash the play for having taken such dramatic license? (Speaking of authors’ agendas, let it be recalled that Shakespeare was creating a villain whose throne was usurped by the grandfather of Shakespeare’s own reigning monarch, a perfect incentive for depicting Richard as a monster. As Charles Maurice de Talleyrand noted centuries later, treason is merely a matter of dates.)

In the movie (and play) “Amadeus,” the most famous and prolific composer of the day is completely absent from the tale. No mention is made of Joseph Haydn, whose presence would have completely unbalanced author Peter Shaffer’s drama. It was Papa Haydn, not Salieri (or Mozart), who was numero uno.

To cavil at such points indicates a fundamental misunderstanding of what a movie (or play) is. The very meaning of “Life of Pi” as a meditation on narrative would be lost if the “real” version of events were presented instead of that of Richard Parker, who tells the tiger’s “tale.” “The Right Stuff” simplifies and condenses, and it is propaganda. So does “Alexander Nevsky.” But both movies thrill, which is the business and point of movies.

In any event, time ultimately winnows the wheat from the chaff. Folks like former President Woodrow Wilson (a historian, no less), referred admiringly to “Birth of a Nation” as history written by lightning, but it didn’t take most people long to identify the film’s grotesque racism (of which the president was also guilty).

If you want to read about the real charge of the Light Brigade, historian Cecil Woodham-Smith has written it; do we begrudge the Errol Flynn version, or his whopping interpretation of Custer at the Little Big Horn? (Well, maybe.) If we are honest, the only reason such grotesque distortions bend us out of shape is the belief — which may be true — that most people get their history from the movies.

But this cannot be the fault of movies. It is the fault of a country that has systematically dismantled and forfeited its educational institutions to the point that no one learns history (or civics, anyone remember them?) any more. If we are curious, we can Google the answers, but instead most of us content ourselves with history according to the movies and blame the movies for the license that every fictional author has claimed as his birthright since the beginning of recorded time.

Anyway, the best novels and movies frequently inspire people to learn the facts. After experiencing the visceral pleasure a movie provides, curiosity may be piqued. It needn’t diminish our pleasure or invalidate our feelings to learn after the fact that the Americans’ narrow escape from Iran at the end of “Argo” was not the nip and tuck affair depicted in the film. But weren’t we on the edge of our seat while watching it? Those “stubborn things,” as John Adams termed facts, need not subsequently diminish our enjoyment of the fictions they inspired.

Art serves many purposes, but among these, surely, is what Colonel Saito in “The Bridge On the River Kwai” characterized as an escape from reality. There ought to be room for fantasy in our lives. Stories, even when they aspire to what we term “realism,” are attempts to improve on reality, to sharpen and organize it, if nothing else. Goodness knows, we cannot escape “reality,” but movies ought to be entitled to give us a break from it now and then without the fact checkers piling on.

Nicholas Meyer is the author, director and Academy Award-nominated screenwriter of “The Seven-Per-Cent Solution” and “The Human Stain” among many others. His latest project, a television miniseries about the life of Harry Houdini, will air on The History Channel in May.