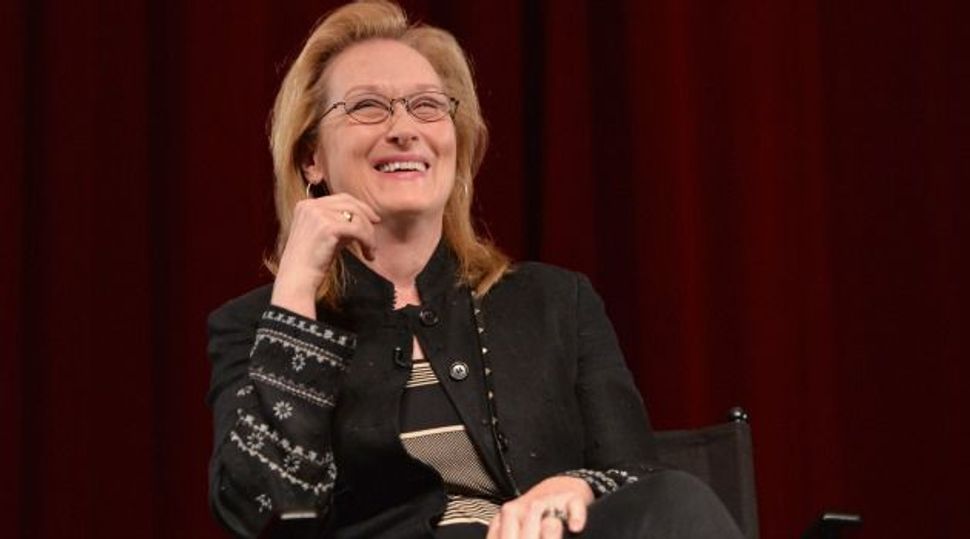 Meryl Streep launched into a 9-minute rant on Walt Disney at National Board of Review dinner in New York on Tuesday.

Onstage to introduce Emma Thompson, who stars as “Mary Poppins” creator P.L. Travers in the behind the scenes Disney flick, “Saving Mr. Banks,” the grande dame of Hollywood called out good ol’ Walt — played by Tom Hanks in the movie — as being sexist, racist and an anti-Semite.

Thanks to Vulture, you can read the full speech below. Don’t mess with Meryl.

[Streep walks on stage wearing one of the “Prize Winner” hats from Nebraska, which had been scattered on the tables as promo items] What? Oh? Oh. Okay. [Takes off hat] I’m not the prize winner. It’s so weird! This is a very late night, and we have Spike Jonze — twice — coming up, so I want to say to you, I have a short, sweet, kind of funny version of this tribute to Emma Thompson, and I have the long, bitter, more truthful version, so I would like a vote — and I’m serious! I’m happy to do just the short one. I’d love to do the long one. [Lots of applause, one audience member hollers, “Go for it!”] Anybody want to leave? Go now. I guess that’s the long one.

Some of [Walt Disney’s] associates reported that Walt Disney didn’t really like women. Ward Kimball, who was one of his chief animators, one of the original “Nine Old Men,” creator of the Cheshire Cat, the Mad Hatter, Jiminy Cricket, said of Disney, “He didn’t trust women, or cats.” And there is a piece of received wisdom that says that the most creative people are often odd, or irritating, eccentric, damaged, difficult. That along with enormous creativity comes certain deficits in humanity, or decency. We are familiar with this trope in our business. Mozart, Van Gogh, Tarantino, Eminem … Ezra Pound said, “I have not met anyone worth a damn who was not irascible.” Well, I have — Emma Thompson.

Not only is she not irascible, she’s practically a saint. There’s something so consoling about that old trope, but Emma makes you want to kill yourself because she’s a beautiful artist, she’s a writer, she’s a thinker, she’s a living, acting conscience. Emma considers carefully what the fuck she is putting out into the culture! Emma thinks, “Is this helpful?” Not, “Will it build my brand?” Not, “Will it give me billions?” Not, “Does this express me? Me! Me! My unique and fabulous self, into all eternity, in every universe, for all time!” That’s a phrase from my Disney contract. I’m serious! “Will I get a sequel out of it, or a boat? Or a perfume contract?”

Ezra Pound said, “I have not met anyone worth a damn who was not irascible.” Though he would say that because he was supposedly a hideous anti-Semite. But his poetry redeems his soul. Disney, who brought joy, arguably, to billions of people, was perhaps … or had some racist proclivities. He formed and supported an anti-Semitic industry lobbying group. And he was certainly, on the evidence of his company’s policies, a gender bigot. Here’s a letter from 1938, stating his company’s policy to a young woman named Mary Ford of Arkansas, who had made application to Disney for the training program in cartooning. And I’m going to read it here in Emma’s tribute, because I know it will tickle our honoree, as she’s also a rabid man-eating feminist like me!

“Dear Miss Ford, your letter of recent date has been received in the inking and painting department for reply. Women do not do any of the creative work in connection with preparing the cartoons for the screen, as that task is performed entirely by young men. For this reason, girls are not considered for the training school. The only work open to women consists of tracing the characters on clear celluloid sheets with India ink, and then, filling in the tracing on the reverse side with paint according to directions.”

When I saw the film, I could just imagine Walt Disney’s chagrin at having to cultivate P.L. Travers’ favor for the 20 years that it took to secure the rights to her work. It must have killed him to encounter a woman, an equally disdainful and superior creature, a person dismissive of his own considerable gifts and prodigious output and imagination. But when we sit in our relative positions of importance and mutual suspicion, and we cast judgment on each other’s work, we’re bound to make small mistakes and misconstrue each other’s motives.

Which brings me to awards season. Which is really ridiculous. We have made so many beautiful movies this year, and to single out one seems unfair. And yet, it’s a great celebration, and I’m so proud to be here, in this group of artists. Nobody can swashbuckle the quick-witted riposte like Emma Thompson. She’s a writer. A real writer. And she has a writer’s relish for the well-chosen word. But some of the most sublime moments in Saving Mr. Banks are completely wordless. They live in the transitions, where P.L. traverses from her public face to her private space. I’m talking about her relentlessness when she has her verbal dim sum, and then it moves to the relaxation of her brow, when she retreats into the past. It’s her stillness. Her attentiveness to her younger self. Her perfect alive-ness. Her girlish alertness. These are qualities that Emma has, as a person. She has real access to her own tenderness, and it’s one of the most disarming things about her. She works like a stevedore, she drinks like a bloke, and she’s smart and crack and she can be withering in a smack-down of wits, but she leads with her heart. And she knows nothing is more funny than earnestness. So now, “An Ode to Emma, Or What Emma is Owed”:

We think the Brits are brittle, they think that we are mush
They are more sentimental, though we do tend to gush
Volcanoes of emotion concealed beneath that lip
Where we are prone to guzzle, they tip the cup and sip
But when eruption bubbles from nowhere near the brain
It’s seismic, granite crumbles, the heart overflows like rain
Like lava, all that feeling melts down like Oscar gold
And Emma leaves us reeling, a knockout, truth be told