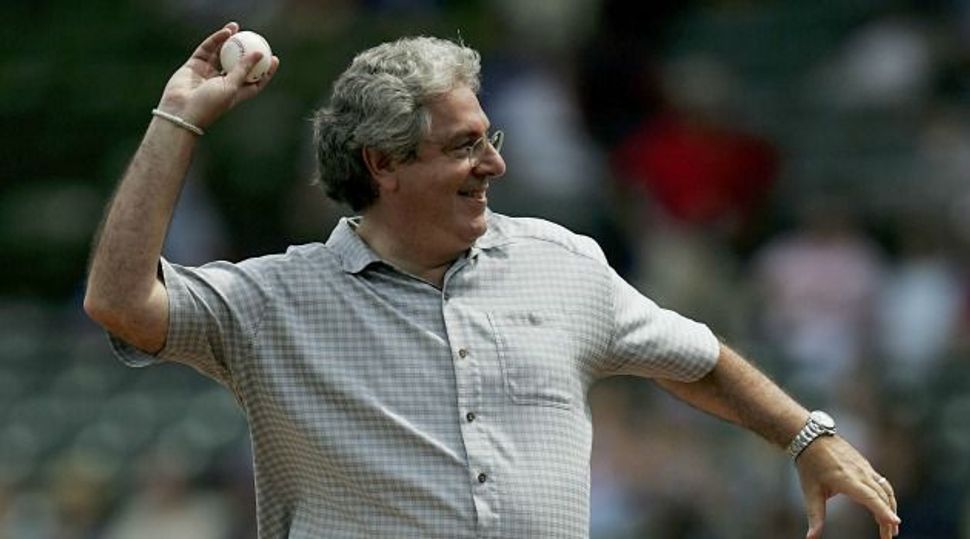 Mayor of Chicago?s North Side: Harold Ramis throws out the first ball at a Cubs game in 2006. Image by Getty Images

Ask any fan of the 1981 comedy “Stripes” about their favorite scenes from the film, and a sizeable percentage will recall the one where Bill Murray and Harold Ramis, seeking to escape their respective dead-end existences, visit a local Army recruiting office. Murray gets most of the laughs in the scene, but Ramis gets off the best line. Responding to a recruiting officer who asks if either of them are gay, Ramis responds in a nasal delivery that’s simultaneously eager and deadpan. “Nah, we’re not homosexual,” he says with a smile. “But we are willing to learn!”

Ramis, who died Monday morning at the age of 69, cemented his reputation as one of the best comic minds in the business as director and screenwriter on films like “Groundhog Day” and “Analyze This.” But he quietly made his own mark as an actor, as well; if the impish glint in his eye might have been too pronounced for your typical “straight man,” his masterful ability to underplay (along with that aforementioned impish glint) is part of what makes his performance as Russell Ziskey in “Stripes” so endearing and memorable. Ditto for his role as Dr. Egon Spengler in “Ghostbusters” and “Ghostbusters II,” and the many recurring characters he played on SCTV, including station manager Moe Green, board chairman Alan “Crazy Legs” Hirschman and the pathologically chipper Officer Friendly.

There was something else that unexpectedly struck me yesterday while watching Ramis in that “Stripes” scene: That’s me, I realized, and at least half of my high school friends. The drab winter jacket, wool scarf, crew-neck sweater and button-down oxford ensemble that Ramis is wearing (along with his shaggy, brushed-out Jewish curls and quietly wise-ass demeanor) was essentially our uniform during Chicago winters in the early 80s. The sense of humor, of course, was the most important part of that outfit — and Ramis had a greater hand in shaping our comedic worldview than just about anyone.

I’d already changed schools many times in several cities before beginning freshman year at a prestigious private school on Chicago’s North Side. At some schools I’d attended, you needed to fight (or at least look like you weren’t afraid to) in order to fit in; at others, you needed to play sports, or be into a particular type of music. But at my new high school, humor was the coin of the realm; if you could make people laugh, you quickly gained friendship and respect, and I was lucky enough to find myself among some like-minded souls with whom I could share a Monty Python- and Saturday Night Live-damaged sense of absurdity.

Even more important to us than those twin pillars of 1970s comedy, however, were the films “Animal House,” “Meatballs,” “Caddyshack” and “Stripes,” all of which Ramis had a hand in writing, and all of which we could (and would) quote extensively from at the slightest provocation; in fact, two of my friends had seen “Caddyshack” — which Ramis also directed — so many times that they were able to write down the entire script from memory. The authority-tweaking humor that coursed through these comedies may have been grounded in the rebellious counterculture of the Vietnam/Watergate era, but it was also sharp and ironic enough to resonate with kids who were coming of age at the dawn of the Reagan era.

Even more crucial for us was SCTV, the syndicated Canadian sketch show that didn’t just skewer authority, but also hilariously lampooned seemingly every facet of pop culture as we knew it. If you went out on Friday nights, it was imperative to be back home in time to catch SCTV; your entire next week of between-class conversations depended upon it. Ramis was a member of SCTV’s enormously talented cast, and he managed to distinguish himself despite playing some of the straightest characters on the show. For me, at least, that straightness was part of his appeal; we worshipped John Candy, Joe Flaherty, Eugene Levy, Andrea Martin, Rick Moranis, Catherine O’Hara and Dave Thomas as comedy gods and goddesses, but Ramis — who had also grown up Jewish on Chicago’s North Side — seemed like he could be one of us. There’s a wonderful SCTV spaghetti western spoof called “A Fist Full of Ugly,” wherein Ramis struggles mightily to keep from cracking up amid a full comic onslaught from Candy, Flaherty and Thomas; he comes perilously close to losing it on a couple of occasions, which is of course what mere comedic mortals like me and my friends would have done in the same position.

For a young man with more book smarts than street savvy, there was also something immensely inspiring about Ramis’s characters in “Stripes” and “Ghostbusters.” Ziskey and Egon are both quiet, laconic types who are unrepentant in their nerd-dom. Yet they’re also highly valued members of their respective male peer groups, and charming enough to win the hands of beautiful women. Ramis’s romancing of Sean Young in Stripes instilled my less-than-smooth 15 year-old self with hope, and I wasn’t alone in thinking that the geeky Ramis-Annie Potts flirtation in “Ghostbusters” was even hotter than a demonically-possessed Sigourney Weaver.

I’m also not alone now in feeling like a close member of my family has died. Harold Ramis and his work have been part of my life for so long, and did so much to shape my sense of humor and the way I look at the world. There’s countless others out there who owe the man a similar debt of gratitude, and that’s not even counting all the folks who had the good fortune to actually work with him; by all accounts, Ramis brought an intelligence and sense of humanity to his craft that’s rare in Hollywood or anywhere else. If his was a life too short, it was unquestionably a life well-lived.

While clicking through various Ramis-related SCTV clips yesterday, I found one I’d forgotten about: A minute-long 1977 PSA featuring Ramis as Moe Green, who offers viewers a free booklet titled “So You’re Dead… Now What?” It’s a mark of Ramis’s comedic brilliance that the clip is still extremely funny to watch despite the sadness of the current circumstances. I’d like to believe that, somewhere, Ramis himself is laughing right along with it.