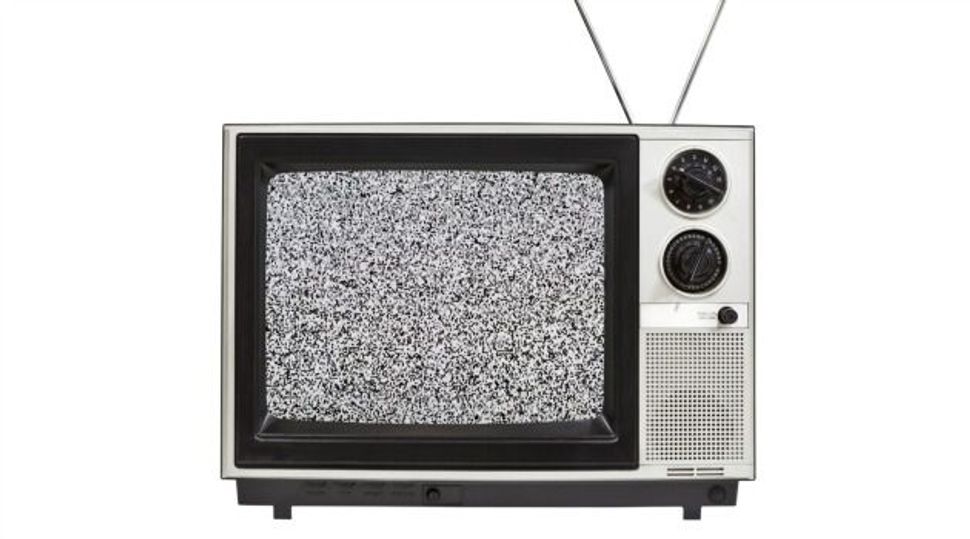 The idea behind Moscow-born Jewish artist Kon Trubkovich’s upcoming show at Marianne Boesky Gallery in New York is at once simple and complicated, which is often, and certainly in this case, a good thing for an idea.

The idea, as described in Trubkovich’s excitable but considered delivery, “is basically snow.” In practice, this translates to a series of paintings of snowy skies rendered in muted shades of sunset or sunrise, the result of a process that involves filming a snowy day, photoshopping the results with drawn-on snowflake smudges, and then painting the outcome. That’s the simple part, one that was inspired, the artist says, by thinking about “the earliest memories, the most sort of difficult to access memories, childhood stuff… about snow, morning, kind of waking up and seeing snow.”

The complicated part has to do with Trubkovich’s longstanding interest in TV static — the moment when a scene is frozen on a VHS tape, obscured but highlighted by randomly patterned imperfections. This translates, in his best work, into a mixture of the crisply clear and the inchoate, one dissolving into the other with no clear boundaries.

Aside from the “snow” paintings, the show incorporates three paintings of Trubkovich’s mother, a few drawings that suggest self-portraiture, and a three-minute video.

Trubkovich, whose manner is genial and direct, explained these works deal with the interplay of personal significance and universality, of individual memory and the collective unconscious. (He is, despite that description, neither New Age-y nor pretentious.)

The images of his mother, for example, taken from footage shot during the goodbye party the artist’s parents gave before the family left Moscow for the United States in 1990, show her at the age Trubkovich is now, which is “this strange synchronicity that [he’s] been sort of living a lot.” The drawings, though they look uncannily like Trubkovich, actually depict Lenny Bruce. (“I like the idea that it is me, because I say it’s a self-portrait, but it’s not me, because the image comes from another person.”)

And the video is distilled from 50-some hours of film shot by a family friend; Trubkovich’s wife, Alexandra Butler, a writer and poet, aptly describes the edited video as “trying to conjecture up the feeling of waking up when you are very little and going to the door and seeing through the cracked door your parents doing something or people over and having that sense of being a child removed from everything looking through a keyhole.” (His wife’s poems often provide painting titles, such as “If you can take the hot lead enema then you can cast the first stone,” for a 2012 painting of purple static.)

On a recent Saturday afternoon, in his studio in the Brooklyn Navy Yard (where he graciously welcomed me, even after I mistook Grand Avenue for Grand Street, wound up aimlessly wandering around Williamsburg, eventually realized the error of my ways, and called to apologize and generally freak out), Trubkovich ruminated on his practice and process, taking great pains to explain himself, occasionally backtracking to clarify a point.

It had been a while, he said, since he’d done “one of these,” by which he ostensibly meant interviews, and, on the verge of the Boesky show, as well as on the verge of fatherhood (he and his wife are expecting a boy around the time “Snow” opens), he seemed invested in being properly understood.

“I grew up non-observant, not religious,” Trubkovich told me. “Having a child is an interesting thing, because you have to address all of that. Is he a Jew? Am I a Jew? All of that. I identify strongly as a Jew. I don’t observe Jewish custom. That’s an incredibly common occurrence for Russian immigrants. And I think I’m probably way more common that uncommon. That’s how my parents grew up: they are secular. I am secular. But I certainly identify as Jewish.”

The origins of the artist’s trademark static are aesthetic. “Because what happens with my work,” he said, discussing the “mother” paintings, “is, you know, you start pausing the old VHS and instead of — once it slows down to that kind of sequence, that complete separation of frames — something happens, I can’t explain it, it’s very — it’s hard to describe — the context of the footage disappears. It completely becomes wide open, and so you can project things onto the footage in a way you wouldn’t be able to if you were playing it with sound.”

He was describing his decision to focus on one second of footage, break it into 24 frames, and “deal with the physicality of film and paper and think about how both of these things work, which is the formal aspect of how I work and what I’m concerned with.” The second of his mother looking up at the camera — “This image of my mother — all it is is her looking up. Somebody says something, she looks up” — became an ideal image of sorts, “an image that was as true as it could possibly be.”

The static also speaks to a representation of memory: “That’s kind of my compass of whether the work works or not, is to measure that — does this feel like what it would feel like to remember or forget something?” he began. “I guess to me the truth of the image comes through its own lack of clarity, you know?”

I asked if memory is important to him because he is an immigrant:

“I think maybe I have access because of that, access to that feeling because of that. If you have a sort of fault line that happens within your life, maybe when you’re younger, then you can sort of say, ‘This was then, and this is now,’ and there is this sort of very clear distinction. But I’m really interested in the collective thing as well. So, early on, what I was thinking about was very personal — and the work is very personal. But the images are not necessarily about my experience. They are more, to me, about the collective experience of forgetting.”

Trubkovich describes the immigrant experience as the “strangeness of things disappearing, of leaving something behind.”

“But beyond that,” he says, “I think we all experience some kind of loss, some kind of departure, at some point in our lives, whether you’ve gotten on a plane or not.”