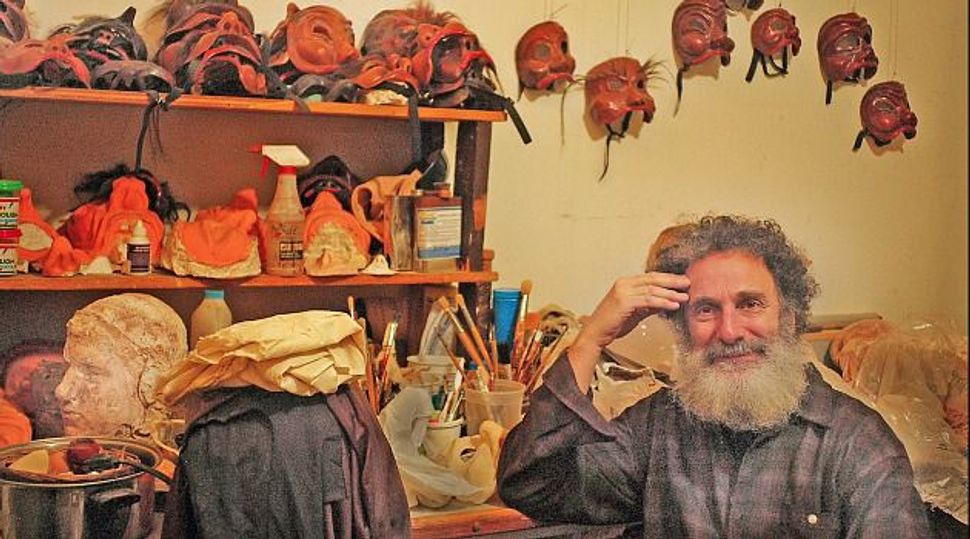 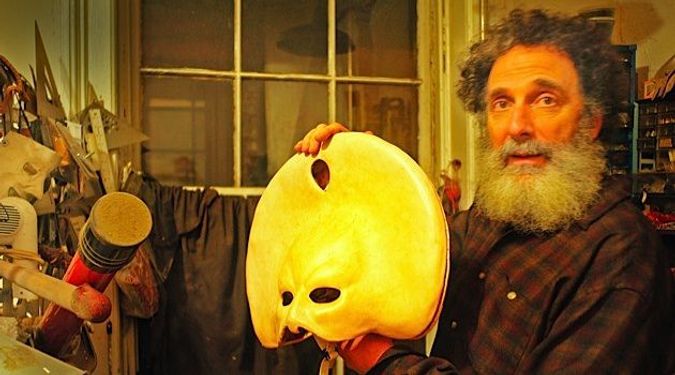 Behind The Mask: Stanley Allan Sherman?s works can be seen in the show ?Queen of the Night.? Image by Scott Heist

‘When one puts on a mask, one frees oneself,” said Stanley Allan Sherman. Sherman has been making masks for over 30 years, yet his career defies easy categorization. His clients have ranged from pro-wrestlers to high-wire walker Philippe Petit, for whom he created a top hat that would remain on his head during performances. Sherman is a clown, mime and director, and is perhaps best known for his frequent appearances on “Late Night With Conan O’Brien” as the hasidic Jew during the ’90s.

I visited Sherman as he prepared for Shabbos in his home on the border between Chelsea and the West Village. Sherman is tall, with a long beard and a way of telling stories that makes the commonplace enchanting.

I followed him through a darkened parlor where leather masks hang from the walls alongside a complete set of Talmud volumes and into his workshop at the back of the apartment. Here he designs and crafts his masks, working mainly in leather but also in the lighter-weight neoprene latex. A single mask can take months to make.

“I have to put souls in my masks for them to really live,” he told me. Sometimes when Sherman speaks, his eyes brighten and grow wide, and for a moment reality seems almost to dissolve. “It’s important for me to live the character that I’m sculpting,” he said, describing how he employs theatrical exercises while sculpting to imbue his masks with emotion so that they may come to life. “I can do it technically — but it would be a totally different mask, even if it’s from the exact same mold. And each mask is different.”

One of Sherman’s creations can currently be seen in the show “Queen of the Night,” which opened on New Year’s Eve to a sold-out run at the Diamond Horseshoe. The interactive theater piece is based on Mozart’s “Magic Flute,” and combines cabaret, dance, acrobatics and a decadent meal. (“Unfortunately it’s not kosher!” Sherman noted with a laugh; the offerings include full roasted pigs.) Fashion designer Thom Browne commissioned the mask for the show’s lead.

Browne’s team used one of Sherman’s minimalistic theatrical training masks as a base for their design. Entirely white, the mask extends out into a generous halo crowned by a jewel, and almost seems to levitate on the face of performer Katherine Crockett. Sherman called it one of the most challenging masks he’s ever made. “I positioned the stone so that if the lighting designer happened to notice it and shined a light on it, the light would fracture in all different directions,” he said. When Crockett appears on the stage in Sherman’s creation, a laser strikes the stone, throwing shattered light across the theater and shrouding it in a psychedelic fog. Originally, the team had envisioned a much more embellished mask, but in collaboration with Sherman, developed a simpler design. “With masks, simple lines help create the magic,” Sherman said. “If you give every single detail of exactly what you want someone to feel and see, there’s no room for their imagination… It’s how you invite people to participate.”

Sherman first began to work with masks while a student at the Paris school of Jacques Lecoq, one of the century’s most influential physical comedy teachers, whose methods emphasized the importance of improvisation and mime as the foundation of dramatic training. By a providential turn of events, Sherman found out about Lecoq, who would become his central teacher, through a woman he met while hitchhiking in the desert by the Dead Sea shortly after graduating high school in Oregon. “There is destiny,” remarked Sherman of the incident. “It’s written, but it’s not written. It’s up to you to take action. In Pirkei Avot it says: ‘We win our bread at the risk of our life.’ If we’re not risking, we’re not living. It took faith to actually walk into the sea.”

Under Lecoq, Sherman was trained in the commedia dell’arte, a form of improvisational theater from 16th century Italy in which masked actors assume roles from a set of stock characters. He continues to specialize in and teach the tradition. “You can see some commedia in vaudeville, you can see it in cartoons, you can see it in opera, it’s a major foundation of theater and entertainment,” said Sherman as we stood in his kitchen while he prepared fresh hummus. Following World War II, commedia enjoyed a revival stimulated by performers such as Carlo Mazzone-Clementi and Lecoq, who began using masks as pedagogical tools. After observing sculpture classes at Beaux Arts and developing his own leather-working techniques, Sherman began to create masks for his own shows and for others. Today, commedia character masks, striking and heavy-featured half-masks with exaggerated expressions, remain a significant part of Sherman’s mask-making repertoire.

While commedia is Sherman’s primary influence as a clown, he says that his performances are Jewishly inflected and inspired. The Talmud, Sherman added, places great value on entertainment and clowns — in tractate Ta’anit, the prophet Elijah is asked who will have a place in the world to come; he responds that there is none. Then, walking through a marketplace, Elijah points to two men. “He says, ‘Hold it, no, those two over there. They’re clowns. They make people laugh, they help people relieve their misery,’” Sherman recounted. “They bring them joy.”

Sherman noted that mask work is best approached with care — wearing a mask can allow one to go beyond one’s limits, and that expansiveness can sometimes prove dangerous. In 1996, Sherman created a mask for WWE wrestler Mick Foley, also known as Mankind. The design was inspired by the bumbling servant character from the commedia, and featured a free-floating moveable jaw supported by leather straps. In addition to becoming the most well-known mask of the wrestling world, the mask freed Foley, Sherman said. Foley’s character blossomed; he began to appear out of nowhere during matches and read poetry at length, drawing laughs with comedy skits involving Mr. Socko, a sock puppet. “The mask allowed him to do all those things. Of course it also allowed him to go further than his body actually would let him,” Sherman explained. “And he quit.” After sustaining multiple injuries, Foley left the ring, making national headlines. “The whole thing is to be able to fly, without any inhibitions or any stops,” Sherman said of mask work. “That is where you have to be careful — you have to know when to stop, when to take care of your body.”

As a matter of course, Sherman always warns recipients of his masks not to look at themselves in the mirror with a mask on to ascertain how they appear. “That’s trying to control the image, and in performance, you have to let the image free,” he said as the sun outside neared its lowest point, encircled by fog. “You have to let the image fly. Having things fly is very important. That’s that trust. Trust in God, trust in faith, its like being able to walk on the edge of the cliff and know you’re gonna be fine.”

Laila Caron is a freelance writer and copyeditor based in New York.