Painting Inspires Dialogue Between Jews and Catholics in Poland 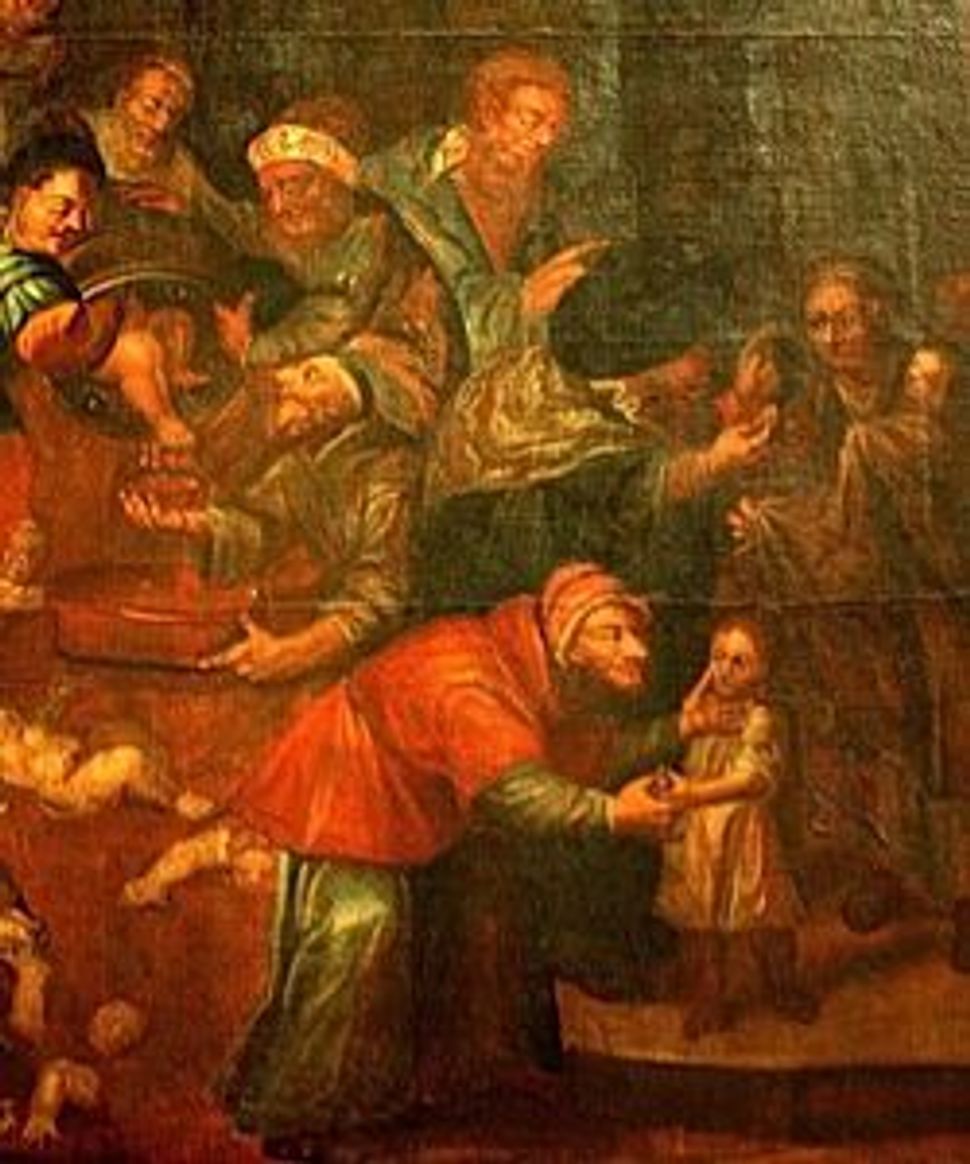 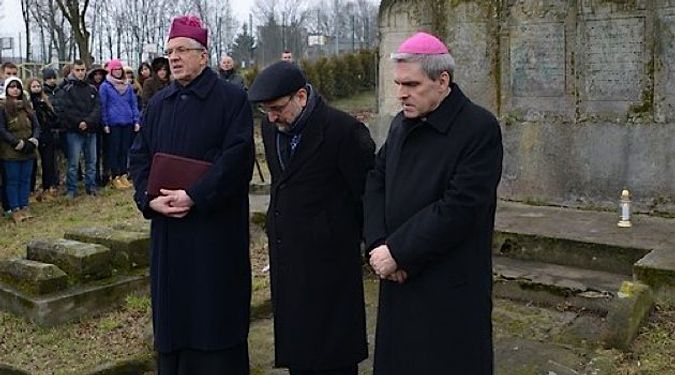 A New Dialogue: The bishop of Sandomierz and the chief rabbi of Poland pray together at a Jewish cemetery. Image by Courtesy of Magda Teter

One could not be unmoved when a group of young clerics from the local Catholic seminary sang a popular Israeli song in Hebrew, “Hevenu Shalom Aleikhem” (“We Brought Peace”), during a Catholic service in a small (and in January very sleepy) town in southeastern Poland. The Israeli ambassador to Poland, Zvi Rav Ner, could be seen singing along with a smile. And this was the second song sung in Hebrew by the young men; the first was a beautiful performance of Shema Yisrael.

What was even more remarkable was the fact that the service was taking place in the Sandomierz Cathedral, known in Poland and the West more for its notorious 18th-century painting depicting Jews killing Christian children than for its historical beauty and unique medieval frescoes. The service by the local bishop with other prominent church dignitaries, was the culmination of the Day of Judaism, observed each year by the Catholic Church in Poland with the aim of fostering a dialogue with Judaism and the Jewish community. Among the goals of the day, celebrated in Poland since 1997, is to “propagate exposition” of biblical texts, “which in the past may have been interpreted in an anti-Jewish and anti-Semitic way” in the spirit of the legacy of the Second Vatican Council and Nostra Aetate, “to explain to the faithful the tragedy of the Jewish extermination,” and “to present anti-Semitism as a sin.”

This year, the Day of Judaism was celebrated in Poland on January 16. Typically, it is celebrated on January 17, which this year fell on Friday and would have conflicted with the Sabbath, which in the winter in Poland begins very early. It capped a week of events, including exhibitions of Judaica in the local museum highlighting the devastation brought by the Shoah, and most importantly, events organized by students from local high schools, among them workshops about Jews in Polish and Sandomierz history, art and literature.

Schools around Poland organize exhibits, plays and other events, competing for the title “The School of Dialogue,” a reward for their efforts to explore the Christian and Jewish shared past in Poland, and to learn about each others’ cultures. This year, one of the high schools in Sandomierz earned the title for their work on the history of the Jews in their town. The local students’ accomplishments demonstrated that the Day of Judaism was not just a staged event facilitated by high-profile officials of the Catholic Church and the Jewish community, but that it represented a wider effort to engage with the history and culture of the people who had shared the town’s and the country’s history for long centuries. 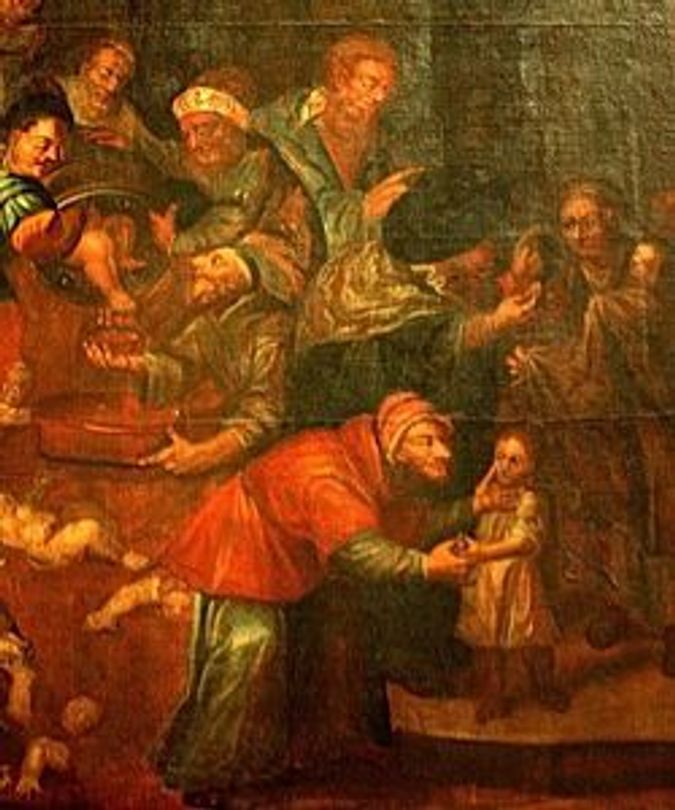 The week-long celebrations in Sandomierz and the high-profile Day of Judaism seemed to mark the end of longstanding hostility between Jews and the local Catholic Diocese and town, caused by the explicitly anti-Jewish painting from the 18th-century. As a result of the flare-up of controversy, since 2006 the painting had languished behind a plywood cover and fabric scrim.. But by the time participants arrived in Sandomierz for the 17th annual Day of Judaism, the painting was visible to visitors along with a new plaque, the fruit of long years of difficult negotiations between the Polish Council of Christians and Jews, the Committee for Dialogue with Judaism at the Conference of the Polish Bishops, and the Jewish community. The newly mounted plaque explicitly states that what the painting depicts is not “historically true” and “could never have happened because Jewish law prohibits the consumption of blood, and thus Jews could not and did not commit ritual murder. Because of such accusations [Jews] were often persecuted and murdered, as it happened also in Sandomierz. Since the thirteenth century popes prohibited the spread of such false accusations and sought to protect Jews from them.”

Seen in isolation, outside of its broader historical and artistic context, the nearly 300-year-old painting under the choir of the Sandomierz Cathedral had become a lieu de mémoire, a site of memory, which crystallized in one image the memory of Jewish-Christian relations in Poland. As French historian Pierre Nora argued, lieux de mémoire exist because the milieux de mémoire, which had been part of everyday life, disappeared.

Since the end of World War II, despite the efforts to revive the Jewish community, there has been no Jewish community that would have been an inseparable part Poland’s everyday reality the way it had been for centuries until 1939. Thus the memory about Jews and about that gone-forever past is located in the lieux de mémoire, such as Kazimierz, the Jewish part of Cracow, Poland, Auschwitz and other death camps, and also the Sandomierz painting. They all became powerful sites of memory.

Yet, memory and associated with it lieux de mémoire necessarily simplify the past, heighten emotions, and mute the past’s different colors, shades and textures. In Poland, the recollection of intensified ant-Semitism during the interwar periodand the destruction of the Jews during World War II influenced the reading of the Sandomierz painting, reducing it to a symbol of a much simplified version of a much richer Polish-Jewish past. The 18th-century representation of blood libels in Sandomierz became tied up with the more recent past, engendering polemics and emotions on all sides. This made it difficult to engage not only with the history of the painting and the events behind it, but also with the larger topic of Jewish-Christian relations.

The Sandomierz painting seems to have made the dialogue between Jews and Christians in Poland more challenging. On the one hand, well-meaning people, many of them devout Catholics committed to Jewish-Christian rapprochement, called for the painting’s removal, and even, in extreme cases, destruction, or at the very least a proper description to accompany its display, informing the viewers that the painting did not represent true events, but rather anti-Jewish fantasies — the last was the position taken by members of the Jewish community. On the other hand, many Polish Catholics, including some high profile members of the clergy, dug their heels, refusing to denounce the events of almost 300 years ago, angering both Jews and Poles ashamed of the dark past in Polish-Jewish relations.

But the controversy over the painting was not really about its 300-year-old past. The long stalemate could certainly be attributed to the fact that for both the Poles and the Jews, the painting was not a representation of a long-gone history, but a symbol of contemporary Polish anti-Semitism. The long-festering controversy over the painting did not make anyone feel good — not Jews, who felt the painting’s presence in a cathedral church without any explanation legitimized historical blood libels and was evidence of continuing Polish anti-Semitism, and not the Catholic church, nor the local population, which became associated with and tainted by the broad notion of Polish and Catholic anti-Semitism.

January 16, 2014 seemed to mark a turning point in the long rankling controversy and the almost two-decade-long stalemate. The celebration of the Day of Judaism and the uncovering of the controversial painting with a proper and prominently displayed description was greeted with a sigh of relief by all. Due credit was given to Sandomierz Bishop Krzysztof Nitkiewicz,and Chief Rabbi of Poland Michael Schudrich who called the unveiling of the controversial painting and the new plaque “a wise solution,” and emphasized that Jewish-Catholic relations had never been better than they were now. To be sure, those efforts at rapprochement have been taking place since the Second Vatican Council, and for the last two decades or so in Poland, but in Sandomierz, they had never succeeded in breaking the stalemate. And here a case can be made for historians lending a hand in difficult to overcome situations. (Full disclosure, I was one of the participating historians in Sandomierz.)

A year before the historic celebration of the Day of Judaism in Sandomierz, a smaller gathering took place just steps from the Cathedral. Scholars from Poland and the United States discussed questions of the history and historiography of Jewish-Christian relations, Jews in Christian art, and the local context for the divisive painting, in a symposium called “Jewish-Christian Relations in History, Memory, and Art: European Context for the Paintings in the Sandomierz Cathedral.” The symposium was a fruit of an unprecedented collaboration between the Diocese of Sandomierz, and especially Bishop Nitkiewicz, and an American academic institution. After meeting the bishop in the summer of 2012, we began planning the symposium, co-sponsored by my home institution, Wesleyan University. On a cold January day in 2013, when the cobbled streets of the beautiful town were lightly covered by snow, we traced Sandomierz iconography to its Italian roots, notably to the history and iconography of Christian martyrologies, and to the iconography of the most notorious example of a blood libel, the 1475 case of Simon of Trent. What the symposium succeeded in doing was to help untangle the past from the present and find language to discuss the painting openly, as a work of its time and place.

A year later, the young clerics would sing Hebrew songs, and a bishop would deliver a moving homily marking the Day of Judaism 2014 — in the very cathedral that had been a source of tension for years.

Magda Teter is a professor of history and Jewish Studies at Wesleyan University.

Painting Inspires Dialogue Between Jews and Catholics in Poland