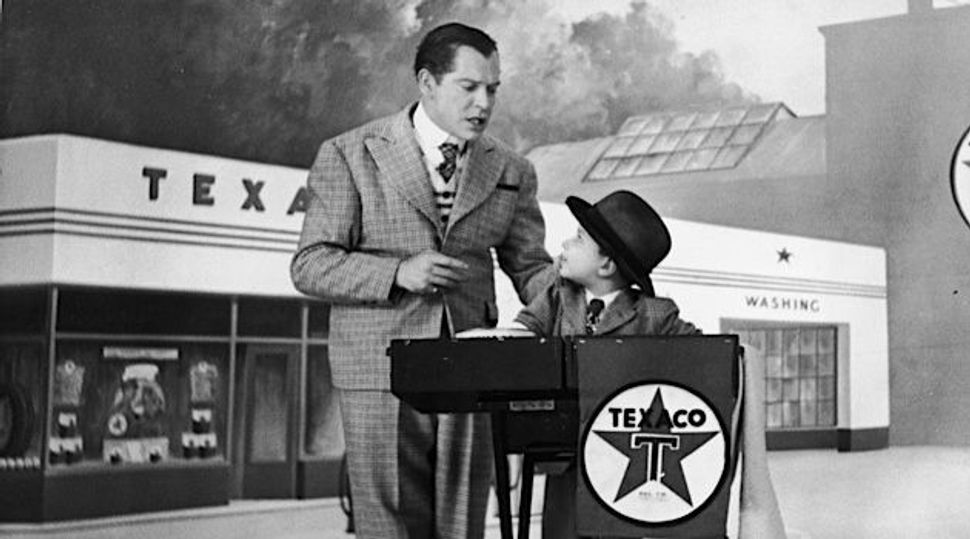 Mr. Oral History: Milton Berle is one of the subjects of the interviews that the AJC collected. Image by Getty Images

Recorded on audiocassette, these interviews comprised more than 6,000 hours of taped material and included conversations with many prominent Jewish Americans in the worlds of politics, sports and the arts. Along with Greenberg and Abzug, some of the highlights of the AJC’s collection include interviews with Isaac Bashevis Singer, Golda Meir and Milton Berle.

This collection was acquired by the New York Public Library’s Dorot Division over twenty years ago. But only now is this treasure trove of Jewish history being made available.

Roughly half of these interviews have been digitized for preservation purposes. The full audio interviews are not currently avaible online. Visitors to the library can listen to them on cassettes, and excerpts of the audio recordings can be heard on AJC’s web site.

Charlotte Bonelli, director of AJC’s archives, said the interview with theater legend Molly Picon is one of her favorites. The actress spoke of her experience performing for Holocaust survivors after the Shoah and one appearance in particular where rain had caused the performance to be cancelled but the audience implored her to “Sing, sing, sing.” Picon also recounted a trip to Korea to visit American soldiers who gave her notes to call relatives when she got back to the United States.

“There’s something very wonderful about listening to these [oral histories] in the person’s actual voice rather than just reading [transcripts],” said Bonnelli. “You really get the flavor of the period and the character of the person. I think that often they were probably more relaxed than they may have been for a TV or radio interview.”

In his AJC interview, Hank Greenberg recalls how anti-Semitic taunts led to riots on the ball field. Speaking of a playoff game in 1931 in Decatur, Ill., Greenberg says, “Hell, they had to get the police to get me out of the ballpark.”

Stephen Corrsin, a curator with the Dorot Division, estimates that 20 percent of the interview transcripts have been digitized. Among them: comedian Alan King, labor leader Victor Gotbaum, playwright Paddy Chayefsky, nightclub owner Art D’Lugoff, and Bella Abzug. In her interview, Abzug is asked if she felt discrimination in law school. She replies: “The professors were extremely nasty to us… they basically didn’t take us too seriously.”

Both the Dorot Division and the AJC have long, proud histories. Just two years after the New York Public Library was founded in 1895, the Dorot Division was created as a separate Jewish collection. More than 300,000 books, microforms, manuscripts, newspapers, periodicals and ephemera from all over the world comprise the collection. For its part, the AJC’s impressive broadcasting legacy began during the 20th century. Its radio programs were produced for many years by Milton Krents, an NBC mail room and accounting department veteran.

For 44 years, Krents served as executive producer of “The Eternal Light,” a Jewish program produced in conjunction with the Jewish Theological Seminary and broadcast on the NBC radio network. One of the most outstanding AJC radio programs was “Dear Adolph,” in which the leading stars of the day, including James Cagney and Helen Hayes, read a series of letters written to the German dictator by Stephen Vincent Benet. AJC’s ability to tap big names for its projects was still evident in 1968, when Louis G. Cowan, producer of the hit television shows “Quiz Kids” and “The $64,000 Question,” and president of the CBS Television Network, was chosen to direct the organization of the AJC oral history project.

According to Corrsin, the prospects of finishing the process of digitizing both the transcripts of the AJC’s oral history interviews and the audio recordings of the interviews are dependent on further funding. The project “covers a real range of the American Jewish experience,” Corrsin said. “It was amazing what they did.”