For Author and PBS Host Simon Schama, ‘Story of the Jews’ Is Personal 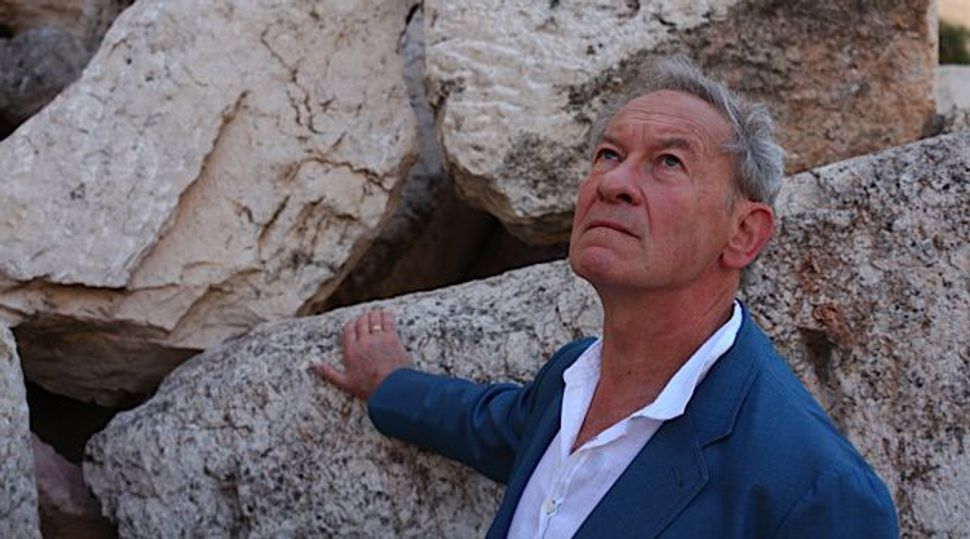 Sermonizing on the Mount: Simon Schama visits Temple Mount in one episode of his series, ?The Story of the Jews.? Image by Tim Kirby/Oxford Film and Television

There are several moments in Simon Schama’s new five-part documentary series, “The Story of the Jews,” when the British historian’s stiff upper lip begins to wobble.

Schama says the series would not have worked if he had not made it personal.

“I wanted it to be hot television, not cool television,” Schama said as he sat in the light-filled kitchen at his home in Pleasantville, N.Y. “I wanted it to break through the formulae of aired opinions, of a measured approach to the narrative.“

Of the 45 documentaries and 16 books that Schama has produced during an academic career that has taken him from Cambridge to Oxford, then Harvard and then Columbia, “The Story of the Jews” is by far his most intimate.

Schama traces 3,000 years of Jewish history, from 10th-century BCE Egypt to 21st-century Israel. Along the way, he shares his personal connection to Judaism, his family’s roots in Lithuania and his views on Zionism and on Israel’s separation wall and West Bank settlements.

Schama, 69, is a passionate narrator on the screen and on the page. In real life, without an editor to hold him back, he is even more excitable. He speaks in long, fluid, sentences that pop with detail. During an anecdote about his dealings with Victor Rothschild, Schama describes Rothschild as “very charming, very brilliant and very dangerous.” He sets the scene for one of their meetings as taking place at “some dark, miserable, rainy moment in the calendar of Cambridge.” 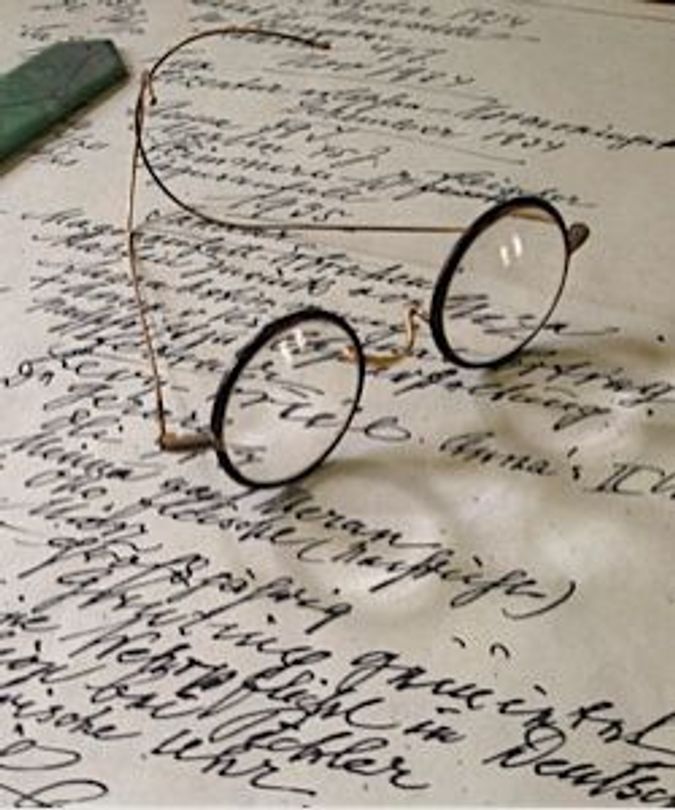 Making a Spectacle of Psychoanalysis: Schama visited the Freud Museum in London where Sigmund Freud?s spectacles are on display. Image by Tim Kirby/Oxford Film and Television

Although Schama has spent almost half his life in the United States, he remains the consummate Englishman. He emphasizes words by rolling out the vowels, so that events are “sooo faaaan-tastic” and an audience can seem like the “en-tiiiire Jewish community.”

When he is on a roll — which is often — he is uninterruptible. As a student at the private Haberdashers’ Aske’s Boys’ School, in Hertfordshire, Schama says, he held the record for the most consecutive detentions because of his constant talking and joking in class. His French teacher called him “Gasbag.”

Schama inherited this gabbiness from his father, Arthur Schama, an East End Jew whose own “horrible” father forbade his son from pursuing a career on the stage. Simon Schama says his father read Dickens aloud two or three evenings a week after dinner. “I read the whole of Shakespeare with him over a four-year period with the two of us taking all the parts, every Sunday afternoon,” he said.

Schama’s father made his living in the rag trade. But in his spare time he was a “charity show impresario.”

“Golders Green Hippodrome was full of Arthur Schama shows,” Schama said. “And he had lots of friends in the theater and the movie business, and he was loud and sort of wonderful.”

During the 1930s, Mosleyites — followers of the British fascist Oswald Mosley — beat up Schama’s father on several occasions. “He said to me, ‘A Jew’s best weapon is his mouth,’” Schama said of his father. “And he drilled in me the indispensable importance of Jewish oratory — oratory derived from Cicero and Shakespeare, used for the cause of the Jews.”

Schama’s family attended Golders Green Synagogue, a United Synagogue congregation that is described as Orthodox in the United Kingdom but that Americans would probably recognize as hewing closer to Conservative tradition. They kept milk and meat separate, and went to synagogue each Sabbath.

Between high school and university, Schama went to Israel with the Labor Zionist youth movement, Habonim, and lived on a kibbutz, Beit HaEmek, in the Western Galilee.

At Cambridge University, Schama continued to attend synagogue regularly, but he never asked himself the “fundamental question” of whether he believed in God. “I still take refuge. I suppose I shuffle around in a Spinozistic, deistic way and say, well if it was good enough for Einstein and Spinoza, it’s good enough for me,” he said.

Schama says that he wanted “The Story of the Jews” to give a sense of what binds Jews together as a people outside of simple Torah observance. He also wanted to give non-Jews an access point to Jewish history outside of the Holocaust and Israel.

He set out to avoid what the historian Salo Baron once disparaged as the “lachrymose conception of Jewish history.” But the history of the Jews being what it is, tragedy always lurks in the wings.

There are moments when the emotion overwhelms Schama. “There I am, like a pathetic, typical Jew on the point of almost f—king crying my eyes out standing on the road to Cordoba,” Schama said. “That was only a second take. But the first one, I just broke down.”

Schama is preparing to depart on a six-city tour to promote the first of a two-volume book, “The Story of the Jews,” that accompanies the television series. He’s still working on the second volume, which is due out this fall.

Schama has an intimidating recall of people, places and dates. But his storytelling technique is to latch on to people or objects, famous and obscure, to drive forward the narrative.

Perhaps the most perplexing moment in the TV series for an American audience will be Schama’s treatment of Herzl and Zionism.

Sitting in a Viennese cafe, Schama tells viewers: “Zionism has become a heavily loaded term, for some people a tragically loaded term, but not for me. I’m a Zionist. I’m quite unapologetic about it.”

Schama admits this might seem anticlimactic to American viewers, but in the U.K., where the show aired last fall, he said that “it was a staggeringly shocking thing to say, and would be in France, as well.”

Although the series received complaints from the Palestine Solidarity Campaign, which objected to the BBC allowing “an openly pro-Israeli commentator to make the ‘moral case’ for Israel,” the show was very well received in general. The newspaper The Observer called it “an astonishing achievement.”

Schama said some critics were angry that his segment on the Balfour Declaration did not include anti-Zionist views. Indeed, he appears frustrated that despite the encyclopedic nature of the show, he still had to omit so many aspects of Jewish history simply because of time constraints and the limitations of television storytelling.

The series started out as a BBC project, but Schama says that if he had known in advance that the Public Broadcasting Service would pick it up, he would have budgeted for a sixth episode that would have focused on Ottoman Turkey, the Jews of Salonica and more details about the Sephardic Diaspora. “I do bitterly mind us not having had time to do that,” he said.

Even so, Schama is proud that the show was such a success in the U.K. Although fewer than 300,000 Jews live in Britain, more than 3 million people watched the show. Schama says that in many parts of the country, 80% of the people that turned up for his talks were non-Jews. “If I wanted to connect with a non-Jewish audience, I did,” he said.

Schama’s Judaism today is not one “of enormous theological rigor,” he said. “Do I really believe the waters parted for the Red Sea? No, I don’t…. But do I every Kol Nidre think I’m standing there with all of Israel in the presence of some sort of celestial accounting of that particular moment? I sure do.”

For Author and PBS Host Simon Schama, ‘Story of the Jews’ Is Personal