11 Greatest Jewish Moments in Baseball History (Not Including Sandy Koufax) 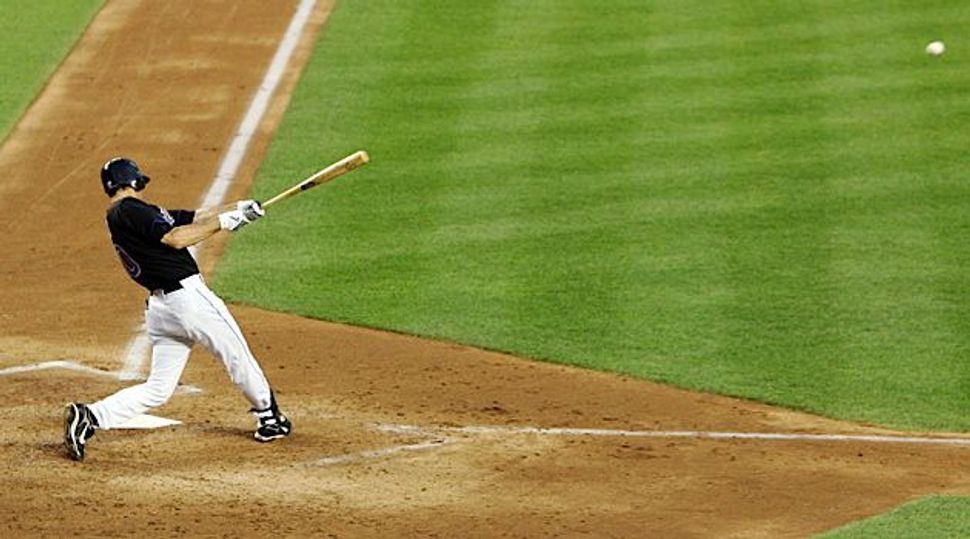 The Green Monster: In one of the greatest offensive performances of all time, Shawn Green went six-for-six on May 23, 2002. Image by Getty Images

Few things warm the heart at the end of a miserable winter quite like the knowledge that baseball season is about to return. While waiting impatiently for opening day, I’d been distracting myself by compiling a list of the 10 greatest Jewish baseball moments of all time; however, I quickly realized that the legendary Sandy Koufax would so thoroughly dominate such an inventory that he may as well have a separate one of his own. Therefore, here are the greatest Jewish baseball moments sans Sandy (it would have been 10, but I simply couldn’t bear to exclude a player known as “The Yiddish Curver”).

TOP 11 Without Sandy (IN DECREASING ORDER OF AWESOMENESS)

1) September 10, 1934: After much soul-searching over whether or not to play on Rosh Hashanah, Detroit Tigers slugger Hank Greenberg attends synagogue on the morning of the holiday, then hits two home runs that afternoon at Navin Field — including a dramatic shot in the bottom of the ninth — beating the Boston Red Sox 2-1. The victory keeps the Tigers rolling on the way to their first American League pennant in 25 years.

2) May 23, 2002: In one of the greatest single-game offensive performances of all time, Los Angeles Dodgers right fielder Shawn Green goes six-for-six against the Milwaukee Brewers with four home runs, a double, a single and seven RBIs. Green’s 19 total bases set a major league record for a nine-inning game.

3) September 30, 1945: On the final day of the regular season, Greenberg — having returned home from World War II just three months earlier — hits a grand slam in the top of the 9th off Nels Potter of the St. Louis Browns, clinching the American League pennant for the Tigers.

4) August 19, 1969: Chicago Cubs lefty Ken Holtzman no-hits the Atlanta Braves at Wrigley Field without striking out a single batter; he remains the last Major League Baseball pitcher to record such an unusual feat.

5) June 3, 1971: Holtzman records the second no-hitter of his career, blanking the defending National League champion Cincinnati Reds (and scoring the game’s only run) in a 1-0 victory at Riverfront Stadium. The only Jewish pitcher other than Koufax to throw multiple no-nos, Holtzman will eventually retire as the winningest Jewish hurler of all time, with 174 career victories to Koufax’s 165.

6) May 5, 1962: Pitching in only his fourth major league start, Los Angeles Angels rookie Bo Belinsky tosses a no-hitter against the Baltimore Orioles, striking out nine O’s in the process. The highlight of Belinsky’s otherwise rocky career (he had far more success with Hollywood starlets than opposing hitters), his no-no was also the first one ever thrown at Dodger Stadium.

7) October 5, 1966: Orioles pitcher Moe Drabowsky comes out of the bullpen in the third inning of Game 1 of the World Series, and proceeds to strike out 11 Dodgers over the next 6 1/3 innings, setting a record for relief strikeouts in a World Series game.

8) October 8, 1959: Rookie Larry Sherry throws 5 1/3 scoreless innings of relief against the Chicago White Sox in Game 6 of the World Series to clinch the world championship for the Dodgers. Sherry, who made three other appearances in the Fall Classic (and also won Game 4), is named the Series MVP.

10) June 15, 1940: New York Giants catcher Harry “The Horse” Danning hits for the cycle (single, double, triple and home run) against the Pittsburgh Pirates at the Polo Grounds. Danning remains the last player to accomplish the feat with an inside-the-park homer.

11 Greatest Jewish Moments in Baseball History (Not Including Sandy Koufax)