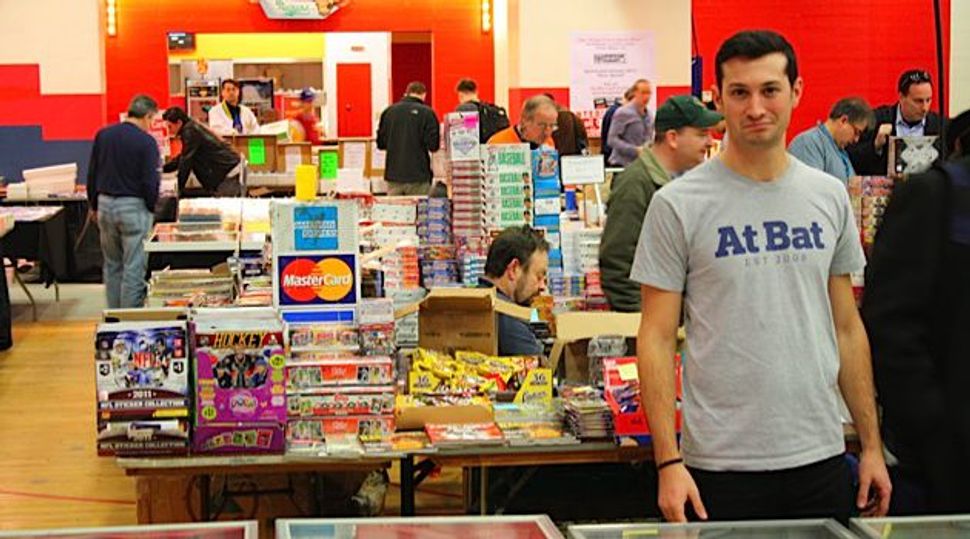 Hank Greenberg baseball cards sell really fast. Too fast, considering many are small and gray and printed on cheap cardboard from 80 years ago. The cards range in price from a few dollars to a few thousand dollars, depending on rarity and condition. Because of Greenberg’s Jewish background and his skill, the cards are of particular interest to collectors. For Brian Roth, these obstacles are unfortunate, because there are 500 different types of Greenberg cards circulating, and he wants to collect them all.

“A popular snag for most people,” says one dealer with an orange goatee and extra-long sideburns.

“They don’t stay for long,” says a huge man in a yellow polo selling only vintage baseball cards.

Roth knows all this, even though most of the dealers at the White Plains Sports Card Show give similar consolations — too slow, better luck next time. It’s Friday — the first day of the show, when inventory should be full — and I’m shadowing Roth as he looks to add to his collection. He only collects Greenbergs, and he currently owns 101 different cards of the Hall-of-Famer.

I used to collect myself, but I lost interest at 16, feeling it was a waste of money. Now, thousands of my old cards are stacked in shoeboxes in my parents’ basement, accruing value and dust. Roth used to feel the same way for most of high school, but he got hooked as a freshman in college. He wanted a theme for his collection, chose Greenberg, and six years later, it’s the shtick that stuck.

“Most serious collectors have a focus,” Roth tells me. “Only going after Hank Greenberg cards started off from a simple idea: I’m Jewish and played first base, just like him. I knew he had great stats, but it really took off after I researched him and watched documentaries. The more I learned about him, the more I respected him.”

Roth, 23, spends his days working in advertising at MRM Worldwide New York and his nights plotting his next Greenberg purchase. In addition to buying at shows, he tracks cards on eBay and looks for deals on collecting forums like Net54baseball and FreedomCardBoard. He also writes about his mission on a blog called “The Hero Who Didn’t Want to Be,” taken from the title of a 2011 Greenberg biography. 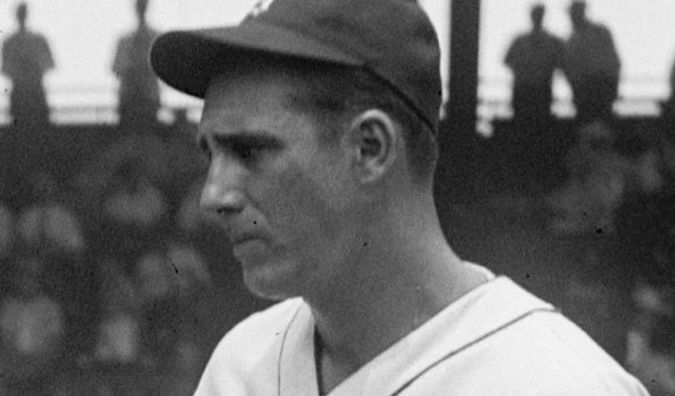 Hanks A Lot: Slugger Greenberg as seen in 1937. Image by Wikimedia Commons

“A lot of people don’t know that Greenberg was successful as a manager and an executive. He was friends with Jackie Robinson and helped him integrate into the majors. So when I was looking for a player to build my collection around, it was an easy choice.”

For those who have never been to a sports card show, imagine an OTB, but replace the cigarette smoke with boyhood nostalgia. Stale air. The bellies of middle-aged men stretching out T-shirts. Too much glare shining off rectangular glass cases that secure each dealer’s most valuable cards. You’re likely to see more 1934 Goudey-brand Hank Greenberg rookie cards than you are women walking the aisles of the show. Everything is clean, though, I’ll give it that.

There are 300 tables in the Westchester County Center, making this the Carolina League of sports card shows. Decent-sized, but nothing like the National Sports Collectors Conventions Roth has been to in Chicago and Baltimore. Those shows fill up 350,000 square feet of floor exhibits. This one is about 25,000 square feet.

Only looking for Greenberg simplifies the buying process, which is crucial regardless of a show’s size, because it’s easy to lose track of time flipping through boxes and binders full of thousands of cards. Cards aren’t the only items for sale, either. You can buy football helmets, posters, stuffed animals, autographed baseballs. One vendor sells candy bars. Another carries Super Bowl tickets.

Roth compares buying cards to buying stocks. Capitalism on cardboard, a perfect analogy to sum up the detached, enterprising, aggressive vibe most of the sellers exude. Many have encyclopedic knowledge about sports, but they’re just looking to flip a card they bought a month ago to make $50. Roth’s purpose is sentimental and moral, which might make him a lousy investor of stocks, but it’s also made him an enlightened collector. In his first blog post from August 2012, he wouldn’t even estimate how much his collection was worth, “because that would involve selling it. Which won’t happen.”

Even without an intention to sell, Roth treats each card carefully to preserve its value. There are hidden expenses at this level of collecting — grading and authenticating — that cost roughly $15 per card, depending on its perceived value. Third-party companies evaluate the condition of the card, assess whether it is legitimate or a forgery, and fit it with a case for protection. Roth once received a card as a gift that turned out to be fake. And in 2010, at this same White Plains show, he overpaid for one Greenberg that graded out lower than expected. These experiences are points on the learning curve for most heavyweight collectors.

“I now have a trained eye. I know to look at the front and back very carefully. You should always spend more than 30 seconds inspecting a card if you’re serious about buying it.”

Experience has also taught him when to pay, when to haggle, and when to say no. Roth finds out he already possesses all but one Greenberg card offered at the show: a 2012 Panini National Treasures card featuring small bat relics from Greenberg, Joe DiMaggio, Lou Gehrig and Joe Medwick. The dealer acts like he’s doing us a favor by setting the price at $250. Roth takes out his phone, finds the same card in an online auction for $110, and politely declines.

He is, however, drawn to two items from other dealers: a Jimmie Foxx card bizarrely autographed by Greenberg ($50) and a postcard signed by Greenberg to a man from Cheboygan, Mich. ($150). Roth already owns seven Greenberg autographs, some on trading cards, some on paper. Why would he need an eighth?

“If I get one of these, it’ll go in my room right with the cards,” he says. “It just adds something unique.” The idea is to expand on the player set, not just complete it. Since collecting Greenbergs is both deeply personal and a somewhat popular endeavor, Roth can make it his own by “taking the collection to parts it hasn’t been before.”

He decides on the postcard. The seller, who has a tidy mustache, slices $20 off the price. Roth places down $130 in cash. Protected by a hard plastic case, the postcard looks to be in good condition for memorabilia 79 years old. Greenberg’s signature angles upward to the right, and the final “g” emphatically loops away from the other letters. The postage stamp in the right corner cost two cents.

Aside from Roth’s quest to find Greenberg cards, most of the day passes without any obvious sign of Judaism other than a few guys in yarmulkes. Although, I wouldn’t be surprised if there are dozens of old bar mitzvah gifts, long ago separated from their original owners, scattered throughout the room.

Then, during our last lap around the tables after Roth mentions Greenberg, a short dealer in a Yankees T-shirt asks if we are Jewish. “I only ask because I am, too,” he says quickly. “Sandy Koufax is my guy. I have a whole shrine to him at home, so I sell off whatever extra I own. I don’t have any Greenbergs, but I have some Koufax cards you might be interested in.”

The sales pitch sounds so strange. Four hours in the County Center and nobody has referred to Koufax. Roth searches for Greenbergs, and the dealers either offer up cards he already owns or shrug their shoulders. But collecting cards of another player almost seems trivial since we’ve been so focused on a specific goal. Koufax and Greenberg may both be Hall of Fame Jewish baseball players, but Roth and this dealer aren’t even in the same ballpark.

An hour later, as we wait for the train to take us back to Grand Central, Roth tells me he believes younger Jews are reshaping how they relate to religion. “It’s more about a cultural identity than going to services,” he says. “More personal, like Birthright or me collecting cards.”

Neither of us have been on Birthright yet, but we joke that there could be a stockpile of Greenberg cards waiting in Jerusalem shops, all affordable and in pristine condition. A beat of silence passes.

“You’ll probably be doing this for another 40 years,” I say.

“More,” Roth says, clutching the box with his autographed postcard. “Or maybe I’ll never even finish.”

Jordan Teicher lives in New York City and has written for The Wall Street Journal, Wired and Slate.