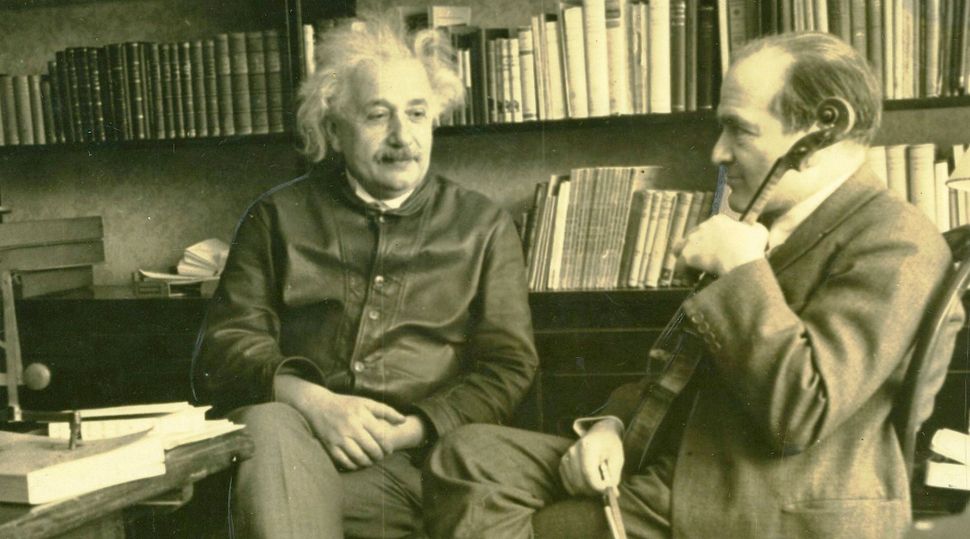 Albert and Friends: Bronislaw Huberman founded the Palestine Orchestra with the support of Albert Einstein, who helped arrange a fundraising dinner in New York. Image by Wikimedia Commons

As the Israel Philharmonic Orchestra embarks on its 14-city tour of the United States under the direction of Zubin Mehta, it’s easy to forget the events of the 1930’s that triggered the creation of what is well established as one of the great orchestras of the world.

Soon after Adolf Hitler became chancellor of Germany in 1933, the Nazis moved to consolidate their power and purpose, as one anti-Semitic policy after another became institutionalized. Jewish professionals, including orchestra musicians, in Germany and other parts of Central Europe lost their jobs. Jewish musicians were ghettoized into Jewish-only Kulturbund orchestras. Many prominent Jews, including artists, began leaving Germany.

Bronis?aw Huberman, the internationally-acclaimed Polish Jewish violinist, would eventually create the Palestine Orchestra, now known as the Israel Philharmonic Orchestra, comprised of Jewish musicians fleeing Europe. He undoubtedly saved many lives. But prior to 1933, Huberman believed strongly that Jews should remain in Europe. Huberman had been a staunch pan-Europeanist, believing that maintaining a united, harmonious European people was the best way to avoid future world wars. He supported and admired Jews in Palestine, but over the years he had rejected Zionism, believing Jews should remain in Europe as an essential component of European life and culture.

“It would be a tragic phenomenon if the Jewish people wanted to break the tie with Europe, where the Jews have taken part in such great measure in building the culture, for which I am proud of my Jewishness,” Huberman said.

Huberman’s thinking had already begun to evolve, but the confluence of events in 1933-34 caused a seismic shift in his thinking. Eventually, he would embark on a global mission that would change the course of musical history.

Among the many tragic headlines out of Germany at the time, as the world lurched towards World War II and the Holocaust: Anti-Nazis murdered. Civil liberties suspended. Frankfurt mayor dismisses Jews employed by the city opera, theatre and library. The Nazis ban Bruno Walter from conducting in Germany. The Nazis raid Einstein’s home in Berlin, and later seize his bank account. A one-day boycott of Jewish businesses begins legalized racism.

At the time, Joseph Goebbels stated that an even more severe legal strike against the Jews would be made, one such “as to annihilate German Jewry.” The world was alerted, but few reacted with impact. In April 1933, Arturo Toscanini, the world’s most acclaimed conductor, led an international boycott against performing in Nazi Germany.

Huberman was immensely popular in Germany, but in July 1933, he joined the boycott. In response to an invitation from conductor Wilhelm Furtwängler to perform with the Berlin Philharmonic, Huberman wrote a letter of rejection, which was published in The New York Times on September 14, 1933.

“It is not a question of violin concertos nor even merely of the Jews. The issue is the retention of those things that our fathers achieved by blood and sacrifice, of the elementary preconditions of our European culture, the freedom of personality and its unconditional self-responsibility unhampered by fetters of caste or race,” Huberman wrote.

But it was not just the tragedy of Europe that motivated Huberman. He had to be convinced that Zionism was morally, socially and culturally correct. In January 1934, Huberman made his third working trip to Palestine, performing 12 sold-out concerts in 18 days. He played before wildly appreciative crowds and saw with his own eyes a people and country achieving his highest ideals of civilization.

“Palestine is developing so outrageously that centuries from now they will describe this time as if it were a new Biblical miracle,” he wrote from Tel Aviv, adding that events in Germany and Palestine had led to a paradigm shift in his thinking: “I cannot reject without further ado the possibility that here, instead of a renunciation of Europe, perhaps an expansion of European culture is taking place.”

By spring 1934, Huberman had decided to start a Jewish orchestra in Palestine. He wrote to the wealthy Sieff family in London seeking financing, and to prominent conductors in Europe and America seeking their participation.

Huberman met with eminent Jews in Palestine and laid out his plan to bring the best Jewish musicians from Europe to Palestine to establish a world-class orchestra. Huberman said he would perform and raise money in Europe and America, and once the funding was in place, conduct auditions in Europe, with German Jews given preference.

Soon after, Huberman embarked on a U.S. concert tour with 42 concerts in 60 days, affording him his first opportunity to raise money for the orchestra in the U.S. As the suffering of German Jews increased, Huberman’s tireless fundraising was propelled by his anger towards educated Germans who complied with the Nazis. He wrote an open letter to the Manchester Guardian [of England]: “Before the whole world, I accuse you, German intellectuals, you non-Nazis, as those truly guilty of all these Nazi crimes, all this lamentable breakdown of a great people.”

In 1936, Albert Einstein assisted Huberman with a fundraising dinner in New York. Toscanini announced he would perform the opening concert in Tel Aviv. Despite the poor world economy, Huberman raised tens of thousands of dollars. The final obstacle involved getting the musicians into Palestine: Because of an ongoing Arab-Jewish conflict, Jewish immigration to Palestine was decreasing. It was difficult to obtain entrance visas. But Huberman prevailed and the Palestine Orchestra was established.

Toscanini conducted the first concert, which took place in Tel Aviv for an audience of 3,000 on December 26, 1936. Seventy-eight years later, the Palestine Orchestra, now known as the Israel Philharmonic Orchestra, remains true to Huberman’s ideals as a cultural ambassador for Israel.

As he was formulating his plan for the orchestra, Huberman wrote in 1934: “Can you imagine a pro-Jewish and pro-Zionist propaganda more effective than a concert tour of the Palestine Orchestra, undertaken in a couple of years throughout the civilized world and acclaimed both by Jews and by Gentiles as amongst the best in existence?”

Peter Aronson, a practicing attorney, worked as a reporter and senior editor for The National Law Journal and Court TV. He recently authored a film script “A Musical Life,” which chronicles Bronislaw Huberman’s struggle to establish the Palestine Orchestra.