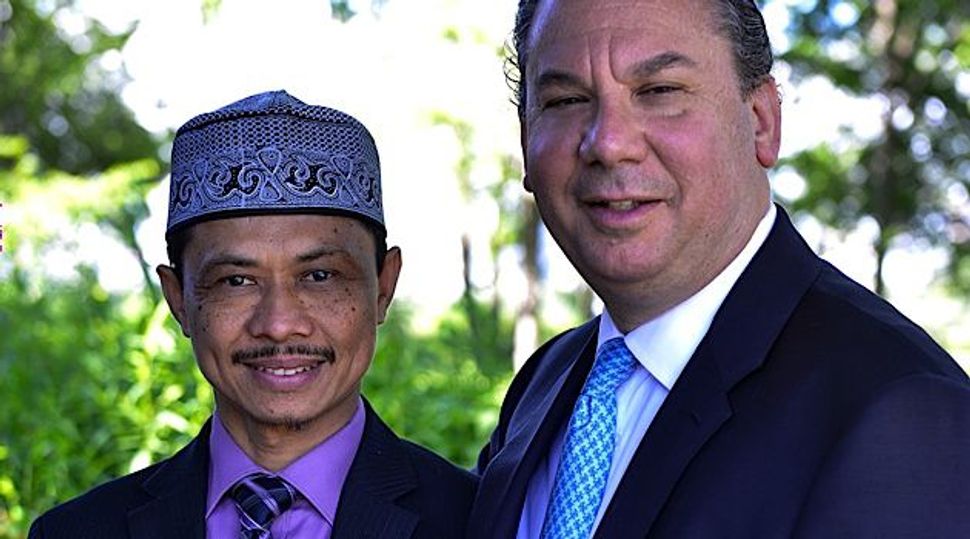 Timon and Pumbaa of Interfaith: Rabbi Marc Schneier and Imam Shamsi Ali have gone on a quest to resolve theological misunderstandings between Jews and Muslims. Image by Frederic Brenner

A rabbi and an imam walk into a bookstore. That may sound like the first line of a joke, but these aren’t any old rabbi and imam, and they’re not joking around.

Rabbi Marc Schneier, the prominent Hampton Synagogue founder and Imam Shamsi Ali, former leader of the Islamic Cultural Center, a major Manhattan mosque, have joined forces to reclaim the original relationship of Judaism and Islam: brotherhood. In their book “Sons of Abraham: A Candid Conversation About the Issues That Divide and Unite Jews and Muslims,” Schneier and Ali offer their opinions on what Jews and Muslims need to accept if they hold any hope of future friendship.

They propose that focus be placed on the theological commonalities between the two communities, rather than on current political tensions and media-generated scandals. It could work; after all, it took a theological convention (Vatican II, in 1965, when the pope absolved Jews of the murder of Jesus) to overhaul the Jewish-Christian relationship. The problem is that these two individuals — both controversial figures who have upset their own communities — might themselves be a little too fiery to succeed.

I met the rabbi and imam at a Barnes & Noble on Manhattan’s Upper West Side, where they were promoting their book. Schneier and Ali make an odd couple; they’re the Timon and Pumbaa of interfaith, if you will. Ali, a diminutive Indonesian man sporting a lime green shirt and a mustache, clasps his fingers together in concentration. Schneier is badger-like, with a hefty frame and a confident demeanor.

But as Schneier insisted in an interview after the event, “You have to understand, there’s method to our madness… Many people believe that the source of the conflict between Muslims and Jews is the current rift in the Middle East. I disagree.”

In reality, the “terrible mistrust between [the] two peoples” is rooted in centuries-old misunderstandings of the other’s basic religious tenets, he says. The issue is more than semantic, because “not only do we share a common faith, but we share a common fate,” which makes this an “existentialist issue” for Judaism and Islam. “When an agreement is reached between Israel and Palestine, how will that treaty be executed? How will it be implemented when the majority of Jews don’t trust Muslims and the majority of Muslims don’t trust Jews?”

Ali outlines four factors that fuel this interreligious suspicion. The first is the media, which “inflame[s] hatred and anger” by jumping on negative news stories; next, the politicization of religion, whereby influential leaders manipulate religious beliefs for their own political purposes; and lastly misreadings of history that place more attention on “dark spots” than on times of peace. But Ali believes the most pernicious is the fourth factor, the misunderstanding of religious texts.

To address these, Schneier and Ali take alternate chapters in the book to slash common misconceptions about their respective religions. For example, Ali says the Jewish idea of the chosen people is particularly divisive for Muslims. It wasn’t until Schneier explained to him that Judaism sees chosenness as a responsibility rather than superiority that Ali realized Islam has a near-identical concept.

“It really struck me when the rabbi explained the meaning of chosen that it’s exactly what we [in Islam] understand as ‘the best nation,’” or kheir ummah, the concept of a group of individuals living as a shining example of God’s will to others, he said. The word translated as “best” even comes from the linguistic root of the Arabic word for “chosen.” It’s important for Muslims to realize this similarity, Ali believes, because the common misunderstanding of Jewish chosenness “has been the source of many poisons in the minds of Muslims.”

For Schneier, the most eye-opening lesson he has learned about Islam is that Muslims, like Jews, have an oral tradition — a secondary body of legal literature that adds context and interpretation to the written law. Quoting phrases from the Quran that seem to be destructive or unsavory, therefore — think four wives, or 72 virgins — is a meaningless exercise and “the height of ignorance.”

“There are some statements in the Torah that, if they were to be read literally, I could make the argument that we’re a bloodthirsty religion. But I would never read the Bible in a literal fashion,” Schneier said. “Who am I to take different verses from the Quran, without really understanding the oral tradition in its historical context?”

The rabbi and imam tackle similarly contentious topics throughout “Sons of Abraham,” from jihad and sharia law to Israel and Islamophobia. But both writers employ a religious vernacular throughout the book, using words and quoting authorities that might be unfamiliar, and therefore alienating, to readers who are not educated in Jewish or Islamic thought. And the whole premise of the project suggests that a resolution of theological misunderstandings could solve wider geopolitical problems today — and be more powerful than the media or global leaders — which seems a far stretch.

It’s important to both leaders that their work be seen as a serious undertaking, and not be dismissed as an exercise in mutual back patting.

“I don’t want you leaving here this evening thinking that you’re only experiencing a ‘kumbaya’ moment… We’re not about dialogue,” Schneier told his Manhattan audience, shrugging off the typical rhetoric that gets applied to interfaith work. He called dialogue “an exchange of pleasantries” that typically includes doing nothing, going to conferences and embracing one another. “That’s not the work that we do. We’re about fighting for the other.”

Neither the rabbi nor the imam is a stranger to hostility. Ali, currently chairman of the small Al-Hikmah Mosque in Astoria, Queens, was fired from his former post at the Islamic Cultural Center in 2011. The reasons for his dismissal remain hazy, but Ali claims the mosque disapproved of his close relationship with the Jews

Schneier is no less of a divisive character in his community. A five-times married rabbi, Schneier was snapped kissing his new girlfriend (now wife) in public before his previous marriage had been dissolved, prompting the Rabbinical Council of America to launch an investigation into allegations that Schneier committed adultery.

Neither of these leaders’ controversies has gone unnoticed. At the book signing, one audience member asked the speakers: “Imam, you are here representing Muslims, so how do you explain the fact that you were fired by the Islamic Council? Rabbi, you are here representing Jews, so how do you explain the fact that you are being investigated for breach of ethics by the Rabbinical Council?” The moderator, criminal defense lawyer Joel Cohen, shut down his question before either Ali or Schneier had a chance to answer, but it poses a valid problem: If these men have alienated their own communities, how can they expect to foster reconciliation with the other?

And yet the pair is making significant waves. In the wake of September 11, Ali was invited to accompany former President George W. Bush on an interfaith visit to Ground Zero, while Schneier recently met with senior representatives (although he declined to specify just how senior) of the Vatican. Bill Clinton wrote the foreword of their book.

“The amount of work we have ahead of us is really Herculean,” said Schneier during the interview. “It took the Israelites 40 years to get to the Promised Land, and there was reconciliation between Judaism and Christianity — what did it take, 2,000 years? We’ve been at this for six.”

Lauren Davidson is a freelance journalist living in New York. She has written for The Wall Street Journal, The Times of London and The Atlantic. Lauren tweets from @laurendavidson.