A Century of Anti-Semitism on the American College Campus 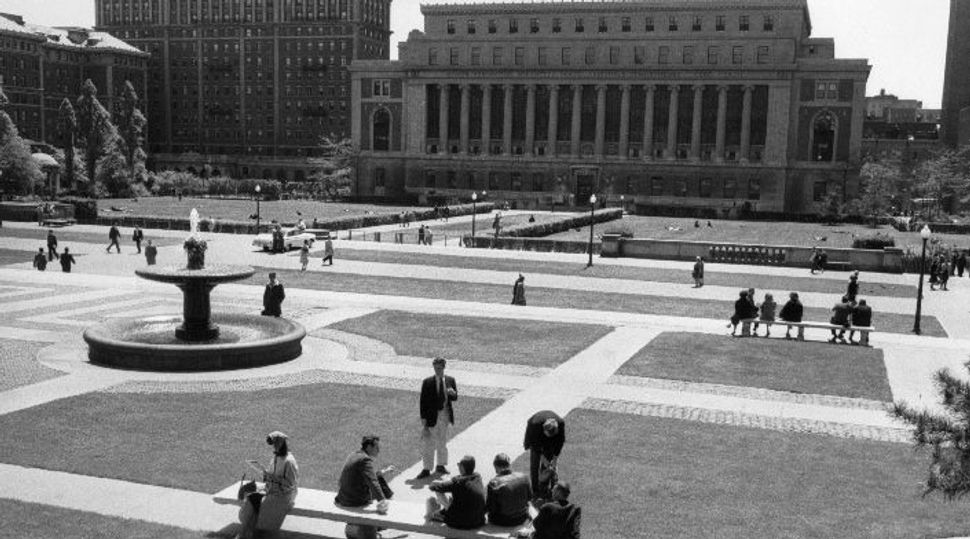 Low Form of Communication: Correspondence among higher-ups at Columbia University in 1914 was suffused with anti-Semitic stereotypes. Image by Getty Images

In 2012, the American-Israeli Cooperative Enterprise published “Israel and the Campus,” a study noting 674 anti-Israel events at 108 United States and Canadian universities during the 2011-12 academic year. It remains undetermined how many of these events led to the development of full-fledged anti-Semitism on campuses making American Jewish students feel uneasy during their bright college years because of who they are. But there’s nothing new in that, as “Antisemitism on the Campus: Past & Present” edited by Eunice G. Pollack proves.

One chapter in the book, written by Andrew S. Winston, points out that in 1914, Columbia University’s dean, Frederick Keppel, expressed concern in a letter to a colleague that “ill prepared and uncultured Jews” from the City College of New York were transferring to Columbia. East European Jewish students, who were recent immigrants, were considered socially and morally inferior to their more prosperous and well-established German Jewish brethren. Yet even eminent Jewish professors were objects of concern. The pioneering American psychologist Joseph Jastrow, of Polish Jewish origin, was described in a letter by Columbia’s department head of psychology to Columbia President Seth Low as possessing the “merits and defects of the Jewish race to a very marked degree.” Things were not better at Harvard, where in 1923, the psychology department chairman Edwin G. Boring, when asked to write a letter of reference for Gilbert Joseph Rich, who would later publish key texts on the psychology of sound, came up with this missive: “You would get a good and enthusiastic worker cheap in Dr. G. J. Rich at the University of Pittsburgh, but I most emphatically do not recommend him, because he has some of the personal unpleasantnesses that are usually associated with Jews.”

In 1925, Boring wrote to the University of Pittsburgh about another student, A. A. Roback, later a noted psychologist and Yiddishist, calling him a “Jew with some of the defects of his race, although much better than [G. J.] Rich.” Boring added in yet another such “recommendation” to the University of Kansas that Roback had not yet landed a job “because he is a Jew, and his inferiority sometimes expresses itself in aggression.” Boring enlarged on his theories of why Jews were unacceptable professors in another letter, opining that “Jews find themselves discriminated against and seek to combat what they feel to be an unjust social inferiority by an aggressiveness which increases rather than diminishes the prejudice.”

Some Jewish graduates who managed to professionally survive these types of recommendations were further traumatized by the sentiments of theirJewish mentors who had barely escaped extermination in fascist Europe. The American Jewish psychologist David Bakan (born Bakanofsy; 1921-2004) wrote in a memoir about Gustav Bergmann, a Viennese Jewish psychology and philosophy professor at the University of Iowa in the late 1940s:

“Bergmann was a refugee who was deeply wounded in his soul by the Nazis. I have seen many such people but Bergmann’s injury was the worst I have seen. He had become profoundly anti-Jewish. He renounced his Judaism. I had been told that if he were sent a Jewish New Year’s card he would send it back. His view was that the only way the Jews could prevent repetition of their various historical persecutions was in a relentless assimilation. This meant that no Jew should ever marry a Jew.”

Another chapter of “Antisemitism on the Campus,” by Henry D. Fetter, discusses the prewar situation at law schools. Roscoe Pound, longtime dean of the Harvard Law School, offered the opinion that Jews and other ethnic minorities “furnish nearly all our cases of nervous breakdown,” adding neuroticism to already extant charges of aggressiveness as a reason not to hire Jews as professors.

This widespread attitude toward Jews in law schools altered considerably after Louis Brandeis graduated from the Harvard Law School at age 20 with the highest grade point average in that school’s history and, after other academic triumphs, was appointed a Supreme Court justice. Fetter notes that Brandeis’s later career “played a significant role in making elite law schools more hospitable to Jews than the larger institutions in which they were located.”

A paragon such as Brandeis could immediately refute charges that Jewish students or faculty were aggressive and neurotic, or that they possessed other supposed racial flaws. In 1949, the Texan attorney and oilman George Washington Armstrong made headlines when he offered Jefferson Military College of Washington, Miss., a multimillion dollar gift on the condition that the school exclude blacks, Jews and Asians. As author Edward S. Shapiro notes, Armstrong was an “anti-Semitic crank.” He had published tracts in which he accused Woodrow Wilson, Dwight D. Eisenhower, Franklin D. Roosevelt, and Harry Truman of being Jews. Armstrong also charged that the assassins of former Presidents Abraham Lincoln and William McKinley were Jews; that Bernard Baruch and Felix Frankfurter had helped make possible the 1941 attack on Pearl Harbor; and perhaps most stunningly, in his book “The Zionists,” Armstrong lauded Adolf Hitler for conducting his armed forces “according to the rules of civilized warfare.”

Despite all this baggage, Jefferson Military College was thrilled by Armstrong’s generosity, and even accepted Armstrong’s personal choice for chairman of the college’s board of trustees, retired U.S. Army general George Van Horn Moseley. In 1938, Moseley had advocated that refugees from Nazi Germany should only be admitted to the United States if they agreed to be sterilized, since in his view the only possible solution to the problem of the Jews was to breed “all the Jewish blood out of the human race.”

In previous times, Armstrong and Moseley might have been allowed to conduct their educational experiment, but in the late 1940s, the nationwide media, led by the radio personality Walter Winchell, decried the plan. The college’s board, while retaining Moseley as a trustee and continuing to ban Asians, Africans and African-Americans from the student body, was pressured to claim that they suddenly disagreed with Armstrong’s instructions to teach anti-Semitism and white supremacy. Outraged by this betrayal, Armstrong withdrew his gift.

With such bugaboos defeated, by 1971, the deans of the law schools of Harvard, Yale, Columbia, Pennsylvania, Berkeley and UCLA were all Jewish, and about 40 percent of top law school faculties were Jewish, according to one historian. Yet this brighter picture was gradually tarnished by growing anti-Semitic expression, sometimes linked to black separatist movements which advanced in the late 1960s, followed by a slew of tenured faculty in more recent decades who used opposition to Israel as an excuse for anti-Semitic hate speech and actions. Armstrong and Moseley are gone, but their ghosts still haunt certain sections of American academia.

A Century of Anti-Semitism on the American College Campus