Why Evangelical Christians Are Right To Be Angry About ‘Noah’ 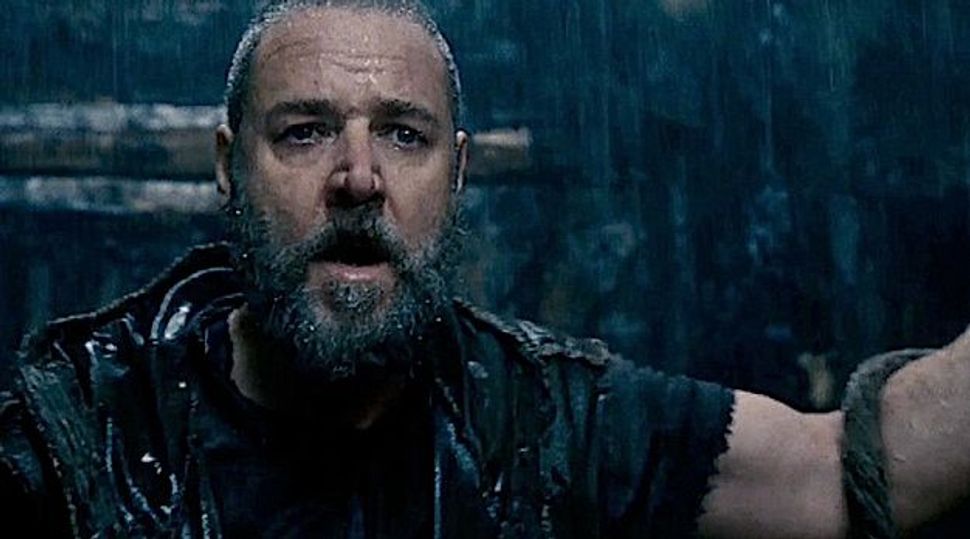 When the Biblical Noah listened to that voice in his head (God?) and built a huge ark to survive a flood, he was taking an expensive risk. Paramount Pictures has taken an equally expensive risk — $125 million, give or take — entrusting auteur Darren Aronofsky to somehow bring together epic and indie styles, Biblical narrative and wild innovation, Noah and Russell Crowe.

The good news for Aronofsky fans (and I have been one since “Pi,” his self-produced debut about Kabbalah and mathematics) is that “Noah” mostly pulls it off. It has epic grandeur, fight scenes, and CGI effects worthy of its production and advertising budgets. But underneath all that, it is a quintessentially Aronofskian meditation on obsession. The title character turns out to be an antihero.

Much of the press prior to “Noah” has been about whether conservative Christians will be upset by the way the film diverges from the Biblical narrative. The consensus (real or manufactured) has been that they are. But the film’s midrashic structure is only half the story. Thematically as well as substantively, this Noah is a radical theological text.

As my colleague Ezra Glinter explains in his review, “Noah” the film is much more elaborate than Noah the Biblical story. Really, it had to — from God’s first misgiving until the flood’s last drop, it only takes up 62 verses. So where did Aronofsky get this stuff?

Some of “Noah’s” extra material is simply made up. Ila, the love interest for Noah’s hunky eldest son Shem, does not appear anywhere in the text or legendary literature. On the other hand, the rabbis do wonder who, exactly, bore the children of Shem, Ham, and Japheth. Were they additional children of Noah, not mentioned because of the incest taboo? Ila (played by Emma Watson) solves that problem by being discovered as a baby by Noah’s family. Of course, we still never learn who Cain’s wife was…

Others of the additions are imaginative elaborations of Biblical figures. Tubal-Cain, the villain of the film, is only briefly mentioned in the Torah, as a “forger of tools out of bronze and iron.” In the film, he is the chieftain of a huge, Game of Thrones style clan which has built vast cities – and, in the film’s environmental allegory, depleted and destroyed the land.

But most of Noah’s extra elements come from Jewish legendary sources: Midrash and Kabbalah primarily. Noah’s wife, for example, goes unnamed in the Biblical text, but the midrash in Bereshit Rabba 23:3 identifies her as Naamah, sister of Tubal-Cain. Aronofsky partially follows suit, keeping her name but severing the connection to Tubal-Cain. In Aronofsky’s film, the children of Cain and the children of Seth are almost like two different nations, never to mix.

Similarly, Methuselah, who is only distinguished by his advanced age in the Torah, becomes in Noah a shamanic figure who enables Noah to hear the voice of God in a ritual that looks a lot like an ayahuasca ceremony. This is consonant with his role in the 17th century midrash Sefer HaYashar, which casts him as an elder sage. Yet unlike in the Midrash, the Methuselah of Noah is essentially amoral. “How would I know right from wrong?” he asks Naamah at one point. Methuselah is, here, the image of the pre-Biblical pagan: in harmony with nature, possessed of magical powers, but bereft of morality.

By far the most dramatic departures from Biblical literalism, though, come in the form of the Watchers, who in the film are fallen angels trapped in gigantic bodies of twisted earth. The Watchers are not Aronofsky’s invention; they appear in the first Book of Enoch, which claims to have been written before the flood, but which scholars date to between the 4th century B.C.E. and 1st century C.E.

I read the Book of Enoch back in graduate school, as it is an important text for the development of Jewish Mysticism. It’s a very weird book, filled with angelology. Yet contrary to the protestations of some of Noah’s critics, it also is considered canonical by some Christians – and possibly by some texts in the Bible itself, such as the Epistle of Jude. It appears to have been the product of an extremely conservative, quasi-gnostic, proto-Essene sect which regarded the world as having been corrupted, and devoted considerable attention to the worlds of angels.

The first part of the Book of Enoch indeed describes the Watchers, fallen angels who are obliquely mentioned in Genesis 6:4. But here Aronofsky departs from the esoteric sources. In Enoch, the Watchers are the ones who father “Nephilim” (‘fallen ones’) with human women. In Noah, the Watchers are basically good angels who sought to protect human beings after the Fall, only to be rejected by them. In Enoch, God punishes the Watchers forever. In Noah, God takes them back into heaven when they help save Noah and his family.

Aronofsky also plays selectively with the Biblical figure of Ham. In the Bible, Ham is cursed, because he “saw the nakedness of his father.” Most likely, given that Ham is identified as the father of Canaan, this means that he had sexual relations with Noah while his father was drunk – the Torah often links Canaan with sexual immorality. As a result, Noah curses Ham and his descendants to serve those of Shem and Japheth.

If that’s not bad enough, later Christian tradition identified Ham as the first African, Japheth as the first European, and Shem as the first Shem-ite/Semite. Genesis 9:25 was used as a justification for slavery.

In the film, all the characters are lily-white, including Ham – a mixed blessing that does away with the racist reading of the story while perpetuating the absurd notion that Biblical figures (like Son of God’s Jesus) were Caucasian. And Aronofsky takes Ham’s sin literally; he sees Noah naked in his tent, and nothing more. Ham’s curse is downplayed, his exile is voluntary, and he is, throughout the film, resentful of his family and torn between loyalty and desire.

All of this may seem rather distant from the simple story of Noah and the Ark. And I think that’s what has conservative folks concerned. If you take the Bible literally, it’s worrisome to see gigantic rock-angels running around and smiting.

But whose fault is that? The Nephilim are in the text – and if anything, Aronofsky sanitized and de-sexualized the story of the Watchers. The story of Noah is a primordial myth. To me, what is unbelievable is that anyone takes it literally. Every animal in the world – really? Every spider, mite, penguin, and possum? All humans descended from one family? Of course, the story is brilliant myth. To take it as history is to take it wrong.

And yet, all of that, all of Aronofsky’s mythmaking and magic is nothing compared to the radical psychological reading he provides of Noah. Here, he is absolutely in accord with Jewish traditions, and absolutely opposed to Christian ones.

Aronofsky’s Noah is a zealot. He obeys God too much, even to the point of threatening to kill his own family in order to extinguish the human race. He is troubled by the deaths of innocent people, but does not intervene to save them. For the rabbis, this renders him “righteous for his age” but not more than that: unlike Abraham, who argued to save the lives of the wicked, Noah just follows orders.

For Aronofsky, “Noah” is yet another obsessive in line with the heroes of “Pi,” “The Wrestler,” “Black Swan,” “Requiem for a Dream,” and “The Fountain.” I was worried, going into “Noah,” that this would be the genius selling out. But I was wrong: this is the genius projecting his obsession with obsession onto his largest screen ever.

In Christian tradition, however, Noah is a saint. He remains righteous amid a wicked society – just as early Christians did in Rome. He has absolute faith in God – just like Christians are called to possess. He is, in short, a paragon of virtue, quite unlike Russell Crowe’s complicated antihero.

“Noah,” then, is a film that fundamentalist Christians are right to abhor. It is midrashic, magical, and radical. Its characters are deeply flawed and deeply complicated. It questions the meaning of faith. It is, in the best senses of the word, quintessentially Jewish.

Why Evangelical Christians Are Right To Be Angry About ‘Noah’