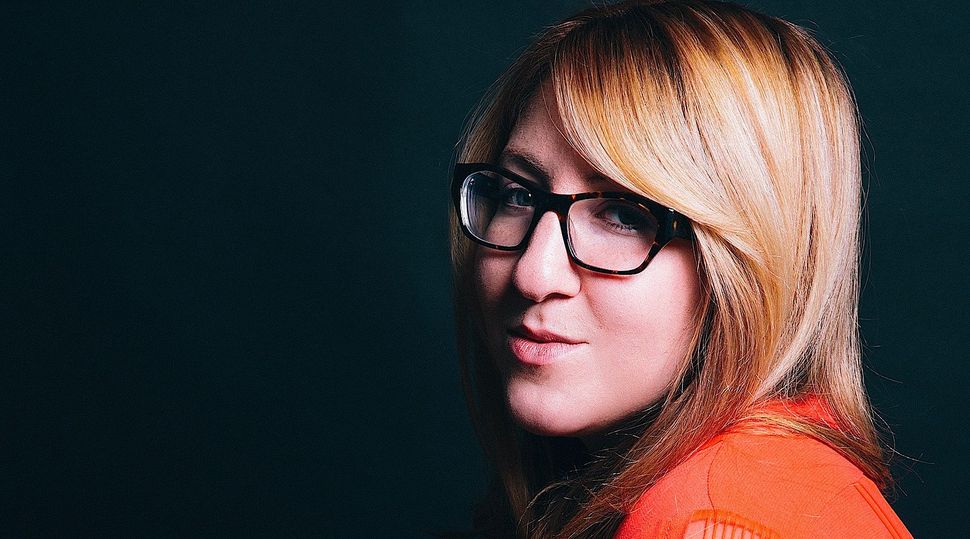 While Jews around the world are preparing to retell the story of their ancestral exodus from Egypt, another story of an exodus is making its way onto bookshelves. Deborah Feldman, the 27-year-old author of the 2012 best-selling memoir “Unorthodox,” is releasing her second memoir, “Exodus” — a disjointed tale of her adjustment from personal oppression to secular life during the two short years since the appearance of her first memoir.

For avid fans, “Exodus” offers few surprises. The book picks up where “Unorthodox” left off: Having heroically escaped the hasidic community with her young son in tow and in desperate search for a place to call home and an identity to call her own, Feldman embarks on a two-year cross-country and international journey. She travels to Europe in search of her grandmother’s origins; she road-trips from East to West coast, both to escape bustling New York City and to discover her own identity. Along the way, she meets and falls in love with various men and searches the suburbs for the perfect home to carve a new, serene existence. The book’s timeline is vague, as is its plot.

Feldman portrays herself as a wandering Jew searching for her Promised Land. Loneliness and uprootedness are prominent motifs hovering over every chapter, every journey. She admits, a few pages in, that “it feels familiar” and “somehow safe” to be lonely and in search of placement. Over the next 230 or so pages, she journeys through the world outside and within herself to find that peace, to fill the “empty container,” as she puts it. That container, a nostalgic metaphor Feldman borrows from her hero, her grandmother, is never quite filled. The reader is left wondering if she will ever really find her Promised Land.

Feldman’s first book, “Unorthodox,” is a coming-of-age story that recounts growing up in the insular hasidic community of Williamsburg, Brooklyn, and marrying at a young age. Eventually she leaves her unhappy marriage and community. Where her first book attempted to shock readers while lobbing blame onto the world, her second work is more introspective.

Feldman comes across as more personable and less self-aggrandizing than in “Unorthodox.” She allows at least some of her vulnerabilities to spill onto the page. Her writing has also matured in some aspects, not the least being her ability to examine herself more critically.

This is the extent of the praise I can find for “Exodus.” If I wasn’t curious about her life after she cut ties with me and the rest of her acquaintances, I would have put this down after 20 pages. There just isn’t much substance. It’s another “Eat, Pray, Love” story, sans the exotic middle-aged lovers on faraway beaches. It’s a story about finding herself after “breaking free” — with all the trivial details, such as those concerning her experimentation with shamanic ritual, which no one but a die-hard fan would care to know.

At this point I should share my history with Deborah — or, as I knew her, Sury — Feldman. I met Feldman nine years ago when she married one of my husband’s closest friends. She was a brilliant, bubbly young woman who married what we call in Yiddish, an “alter bokher” — an older bachelor. Like my husband, he could not find a suitable match at 18 because he was not your typical, ideal young Satmar Hasid. He was cast as a “bum,” a bad boy of sorts. He frequented the movies, drove a car and worked.

Ther four of us became couple friends. We weren’t especially close, but we went out to restaurants, we visited their new place in Monsey often, and they visited our basement apartment in Kiryas Joel. I was there after her son was born, bringing flowers and little blue shoes in a box; she was there when my daughter was born, bringing a pretty pink knit outfit in a floral box that I now use to store cards.

In 2008, my husband and I moved a block away from the Feldmans in Airmont, N.Y. — an up-and-coming open community of families looking to escape their hasidic communities and to experiment with different versions of post-hasidic Orthodoxy. We spent a lot of time together over the next year, discussing her writing classes at Sarah Lawrence College and sharing our doubts about the “system.” We talked about how we envisioned raising our children with a good, solid, secular education, and we discussed our mutual dislike of everything hasidic. I learned a lot from Feldman about literature and feminism, about Jane Austen and Betty Friedan. Naturally, after I started community college, I was convinced that Sarah Lawrence should be my next stop.

Then, one morning in September of 2009, she picked herself up with her son never to be heard from again. She cut off everyone from her previous life, and wrote a sensationalistic memoir, much of which I know to be untrue. Despite what she claimed, her college attendance was no secret in Airmont, and she received support and admiration from community members. Her car proudly sported a Sarah Lawrence College banner on the window. She was also not expected to be subservient to her husband. I know all this because I spent much time with her and her husband. “Unorthodox” was a stylized account of real people and situations.

It may seem curious to the reader that Feldman consistently exalts her grandmother, when she has nothing nice to say about her hasidic past. Feldman was raised by her grandmother after her own mother left a miserable marriage to a mentally ill man. The mother left with her younger daughter while Feldman remained in her grandparents’ home. In “Exodus,” as in “Unorthodox,” Grandma is everything good in Feldman’s tumultuous childhood.

In a quest to connect with her grandmother — who is still alive but with whom Feldman also cut ties — and to make sense of her heritage, Feldman travels to Hungary to retrace her grandmother’s footsteps. She finds her grandmother’s house in a small village in Nyíregyháza, Hungary, with the help of city officials who are enthralled with her brilliance and curiosity and, she says, fame. She traces her grandmother’s journey to Sweden where she recuperated after liberation. She scrupulously pieces together a puzzle of a stoic woman who survived a living hell and managed to rebuild from the ashes.

In Europe she also comes head-to-head with anti-Semitism and struggles to understand its implications. Her feigned shock at Jewish persecution comes across as juvenile, and her outrage as disingenuous. Here she walks in the so-called Jewish quarter of Córdoba, Spain and is “flattened” by the fact that all the Jewish homes were razed by riots in the 14th and 15th century. In a moment of frustration, she admonishes the man at the front desk of the Jewish museum for the injustice of the area being dubbed the Jewish quarter, and storms out lamenting that she could never live there. A block down she discovers a jeweler selling Star of David necklaces. She purchases one, proudly puts it on, and marches down the street to “meet everyone’s gaze.” She is Jewish. Her roots are there, in Córdoba.

The book is also ripe with pseudo-thoughtful observations, such as those she makes when showing her 7-year-old son “Fiddler on the Roof” to give him a taste of what Jewish life was like. She fails to acknowledge that her son spends every Shabbat and Jewish holiday with his father. Furthermore, his father, who is part of my social circle, also lives in a Jewish community. Their son does not have to see a caricatured Hollywood version of Jewish life to understand its legacy.

Feldman dedicates the last quarter of the book to her relationships with “ridiculously hot” men who are perpetually dumb. There’s Conor from New Orleans, whose genes are a mixture of Harry Connick, Jr., and Daniel Craig. Then there’s Jonathan, a “movies guy,” who isn’t a deep thinker because, as she implies, directors just don’t come that way.

In a bizarre and almost deliberate-sounding twist of fate, she hooks up with a string of German men who bring back haunting memories of Nazis and who eventually help her overcome her hatred. The first German, Otto, agrees to play the roles of Nazi officer and Jewish girl with her after their date, beneath the Williamsburg Bridge. He stands up, hovers over her with a threatening stare and demands to see her papers. She, in turn, pulls her knees into her chest, frightened. The second German is Cristopher, a Harvard professor and distinguished author of a book about Third Reich ideology. Then she meets Markus online who helps her learn German. It’s the ultimate redemptive relationship: the Nazi descendant who declares his love of Jews and the Jewish girl who comes to accept the Nazi descendant as a human being worthy of her affection. This is the transgressive section of the book and the one her fans will find most fascinating. But any deeper meaning of these relationships eludes her, or she conceals them from the reader.

In the last few pages, she laments her need to cut herself off from people when she realizes that Markus is coming too close. There’s a chasm, she says at the end, between herself and the place she comes from. In “Exodus,” Feldman leaves the reader wondering if she will ever find true peace and if she will ever reconcile with her grandmother for whom she longs but mourns as if she isn’t still living within driving distance from her home in New England. Her lack of attempt to reconnect with someone she says she pines for leaves the reader wondering why. Had Feldman explored this question, she may have made herself vulnerable, but she would also have given the reader some insight into who she really is.

Frimet Goldberger is a freelance journalist and contributor the Forward and other outlets.