Getting to the Heart and Sole of the Matter 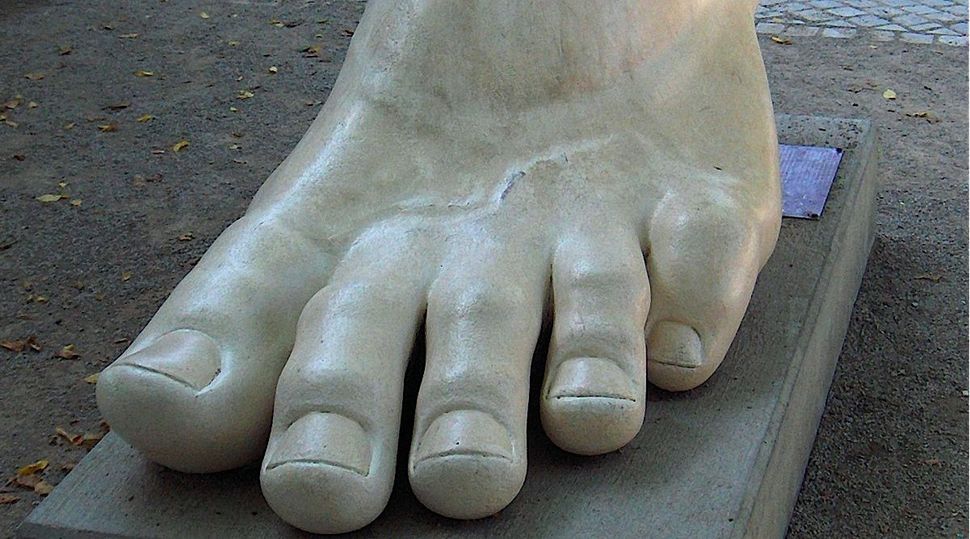 Shelly Rosen, who grew up living with grandparents who spoke to her in Yiddish, writes that Yiddish words from those days are still popping up in her head — the latest of which is padeshve, which she thinks means “the sole or arched part of the bottom of my foot.” And she asks, “Did I make this up, or is it really Yiddish?”

No, Shelly, you didn’t make it up; it definitely is Yiddish, though it’s a word that generally refers to the sole of a shoe, the sole of the foot being pyate. It comes from Polish podeszwa, which has the same meaning.

And that, for incurious minds, would be that. But since you all have curious ones (you wouldn’t be reading this column if you didn’t), you’re already wondering: “Wait a minute! Can the ped- of pedeshve have something to do with the “ped-” of such foot-related English words as “pedal” and “pedestrian”? And so as not to keep you in suspense a moment longer, I’ll tell you not only that it can, but also that it does.

The “ped-” of “pedal” and “pedestrian” comes from Latin pes, “foot,” which is the nominative singular form of a noun whose inflected forms (genitive pedis, dative pedi, nominative plural pedes, etc.) all have a “d” in them. In such cases, it needs to be assumed that the “d” was originally in the nominative singular, too, and dropped out in Latin’s early history — and this is confirmed by ancient Greek, which has the very same pattern for pous, its word for “foot”: genitive podo´s, dative podí and nominative plural po´des. English words built on Latin and Greek roots almost always use these inflected forms, and so we say “pedestrian” and not “pesestrian,” and “podiatry” instead of “pousiatry.”

But Polish, you object, does not descend from Latin or from Greek! No, it doesn’t. It’s a Slavic language closely related to Russian, and its word for “foot” is noga or stopa. Yet look up pod in a Polish-English dictionary, and you’ll find something interesting: One of its primary meanings is “under,” “below” or “beneath,” and it’s a prefix in numerous words in which this meaning figures — among them, podeprzec´, “to tread on”; podstawa, “base” or “foundation,” and podgo´rny, “situated at the foot of a hill.” Clearly there is a connection between Polish pod and the Greek and Latin words for “foot” — and this is not surprising, considering that all three are Indo-European languages, descended from an original mother tongue that was conjecturally spoken 7,000 or 8,000 years ago, somewhere in Eastern Europe or Asia Minor.

Now, though, you have another question: But isn’t English an Indo-European language, too? Why, then, without having to borrow from Greek and Latin, doesn’t it also have a word for “foot” or “underfoot” with a pod- or ped- in it?

I take it you’ve never heard of Grimm’s Law.

Grimm’s Law is not the law that states that all fairy tales end happily, even though the two brothers who formulated it, Jacob and Wilhelm Grimm, were the very same ones who collected and published, in the early 19th century, the famed collection of German folktales bearing their name that became a classic in English translation, too. The Grimms were also gifted philologists, the first to realize that when the Germanic family of languages (to which English belongs) developed from its mother tongue of proto-Indo-European (then a new concept in the world of linguistics), a regular series of sound shifts occurred. Grimm’s Law spelled out these shifts. The first part of it said that, in Germanic, all proto-European voiced stops changed to voiceless stops — or, to put it in less technical terms, every “b” became a “p,” every “d” became a “t” and every “g” became a “k.” The second part of Grimm’s Law is that all voiceless stops changed to voiceless fricatives — that is, every “p” became an “f,” every “t” became a “th” and every “k” became a “kh.”

Suppose we now hypothesize, on the very limited basis of Latin, Greek and Polish (there are many dozens of Indo-European languages in the world today), an original Indo-European word pod, meaning “foot.” Apply Grimm’s Law to it, and we get fo¯t, which is indeed the proto-Germanic word for “foot,” as well as the Old English one. (In modern German, the word is Fuss.) Neat!

Actually, the conjectured proto-Indo-European word for “foot” is po¯ds (thus accounting for the “s” in Latin pes and Greek pous). If we look at words for “foot,” or meanings close to it in various contemporary Indo-European languages, some of the results we come up with are Italian piede, French pied, Dutch voet, Swedish fot, Polish pie˛ta (“heel”), Russian pyatka (“heel”), Lithuanian pádas (“sole”), Albanian poshtë (“down,” “below,” “underneath”), Welsh baw (“dirt”), Kurdish pe, Persian pa and Hindi paya. That’s no doubt a lot more than Shelly Rosen wanted to know, but that is one of the risks involved in writing me.

Getting to the Heart and Sole of the Matter