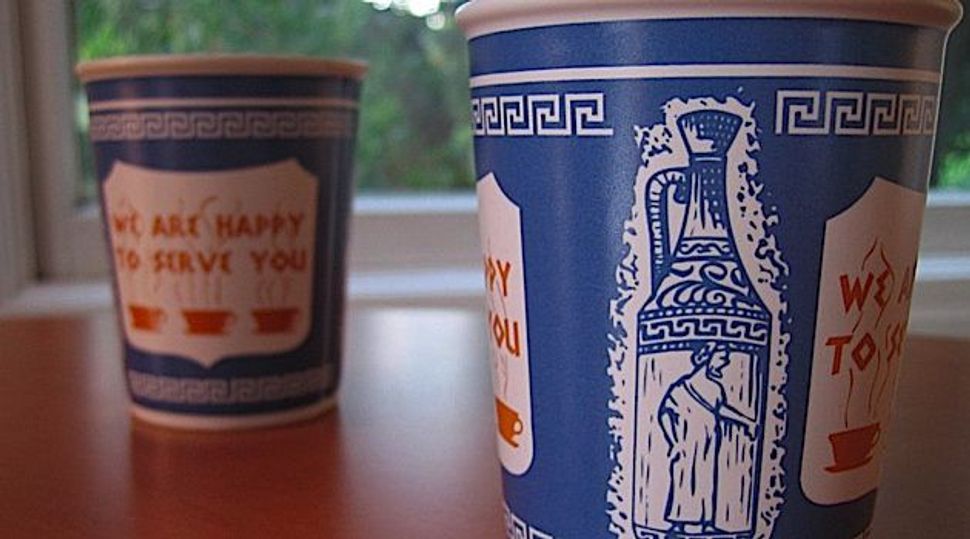 Four of Cups: The creator of the ?Anthora? cup was Leslie Buck who was a survivor of Auschwitz and Buchenwald. Image by Wikimedia Commons

In the Talmud (Eruvin 65b), Rabbi Ilai cleverly opines: “A person is recognized by three things: their cup, their pocket, and their anger.” In other words, how they handle their liquor (self control), their money (generosity), and their temper (patience). It’s a lot more poetic in the Hebrew, where the three characteristics are, “koso, kiso, and ka’aso.”

A more alliterative English translation might be, “pour, pocket, and pique.” Entire sermons and morality tales can be woven from this dictum, but with Passover and its four cups of wine quickly approaching, I wanted to shed a little light on some unusual Jewish connections to item #1 from this aphorism: The Cup.

Four cups of coffee is more common for many of us than four cups of wine (and not just for users of the Maxwell House haggadah), and one place where I often see people’s cups, pockets and anger-management skills come into play is standing on line at Starbucks.

Are we the wise child who chats up the barista with questions about bean origins, shade-grown vs. organic, and optimal brewing temperatures? The wicked child who snarls his order and sighs impatiently at the guy chatting up the barista? The simple child who tips generously and smiles warmly at the mother and sugar-crashing toddler behind him in line? Or the child who stands in stunned silence at the overwhelming choice of sizes, flavors, and add-ins on the menu?

No matter which child you are, when you exit Starbucks you’ll be carrying a cup whose iconic design is largely Jewish in origin. One of the 1971 founders of the original Starbucks, Zev Siegel, was Jewish, and in 1987 the company was bought by fellow Jew and former employee Howard Schultz, who was passionately committed to turning Starbucks from a whole-bean coffee roaster and retailer into a chain of espresso bars that served as communal gathering places like those he encountered on buying trips to Milan as Starbucks’ former director of marketing.

The Starbucks cup may be iconic (if not ubiquitous), but there’s one other coffee cup that has it beat in terms of recognizability and Jewish connections.

Fifty years ago, in an attempt to sell more paper cups to the plethora of Greek-owned diners in New York City, the marketing director for the startup Sherri Cup Company created the “Anthora” coffee cup. The cup’s creator, Leslie Buck, was born Laszlo Büch to a Ukranian Jewish family. Both his parents were killed by the Nazis, and Leslie himself was a survivor of both Auschwitz and Buchenwald.

Featuring the blue and white of the Greek flag, with a classic key pattern, a drawing of an amphora (the Greek vase for which the cup, courtesy of Buck’s thick accent, is named), The New York Times called this cup, “a pop-cultural totem” that was “as vivid an emblem of New York City as the Statue of Liberty.” For many New Yorkers, this simple cup can evoke Proustian memories of streets traveled, early work mornings, and Sunday dog walks. For Buck, it was a long journey from “Work Makes You Free” to “We Are Happy to Serve You.”

At our seder, we lift each cup in remembrance of our journey from slavery to freedom. But it is not freedom from work we desire – it is the freedom to approach each (caffeine-fueled) day with the discipline, generosity and patience necessary to immerse ourselves in work that really matters – to our lives, our communities, and our world.

As Marge Piercy wrote, in her poem, “To Be of Use”:

I want to be with people who submerge
in the task, who go into the fields to harvest
and work in a row and pass the bags along…
…The work of the world is common as mud.
Botched, it smears the hands, crumbles to dust.
But the thing worth doing well done
has a shape that satisfies, clean and evident.
Greek amphoras for wine or oil,
Hopi vases that held corn, are put in museums
but you know they were made to be used.
The pitcher cries for water to carry
and a person for work that is real.

Eric Schulmiller is the cantor of the Reconstructionist Synagogue of the North Shore.