Why We’re Living in the Golden Age of Jewish Baseball 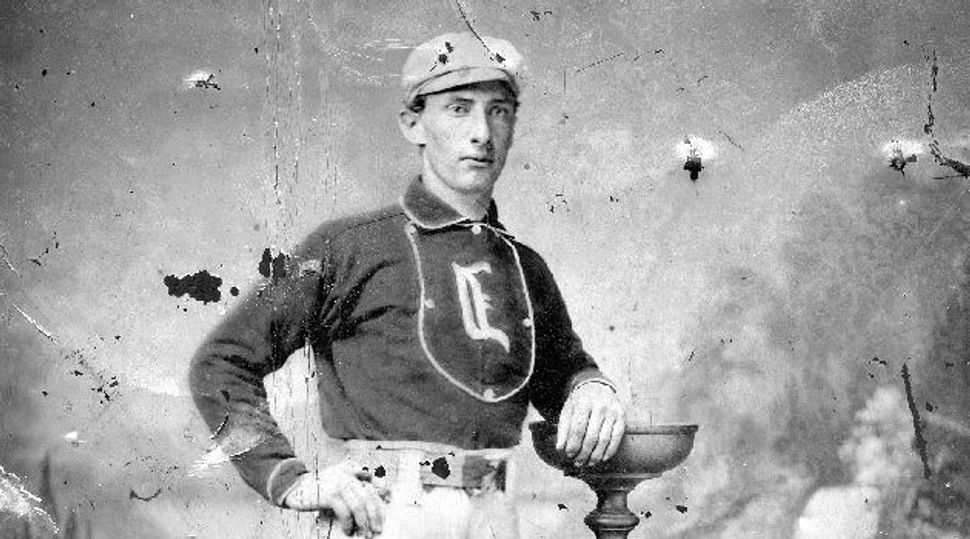 Jewish museums in the United States often walk a tightrope when planning special exhibitions: Should they focus exclusively on the Jewish experience or study other ethnic communities as well? The former approach risks parochialism, while the latter would make the museum’s focus overly broad.

In its new exhibit on Jews and baseball, “Chasing Dreams: Baseball & Becoming American,” the National Museum of American Jewish History in Philadelphia embraces the broader approach. Among the 130 objects on display through October 26 are some grand-slam Jewish artifacts: Hank Greenberg’s 1935 Most Valuable Player award and two of Sandy Koufax’s jerseys. At the same time, a photo of Greenberg standing alongside his contemporary, Italian-American star Joe DiMaggio, graces one wall, and the uniforms of other baseball pioneers such as Puerto Rican icon Roberto Clemente, African-American slugger Hank Aaron, Dominican pitcher Juan Marichal, and Japanese outfielder Ichiro Suzuki hang near some Koufax memorabilia.

To ignore other groups “would neither do justice to the Jewish experience nor do justice to the overall experience of our nation,” said Josh Perelman, chief curator and director of collections and exhibitions at the museum. After all, Greenberg and DiMaggio are two sons of immigrants who, according to Perelman, “carried with them the pride and aspirations of their communities.”

A 1948 Hebrew children’s book on display makes clear that the ties between the two Hall of Famers have historical roots. Titled “Hayim Pumpernickel,” the book tells the story of a young, orphaned Holocaust refugee looking for a lost verse of the Torah. As part of the boy’s search, he enlists the help of both Greenberg and DiMaggio. Clemente and Koufax didn’t share such literary connections, but, said Perelman, they were both 1960s-era stars who “leveraged their stardom to build a bridge between their communities and America.”

We’re currently living in a golden age for Jews and baseball. Players such as Shawn Green, Kevin Youkilis, Ian Kinsler and Ryan Braun have all graced All-Star teams in the past decade. It’s also a golden age for books and other memorabilia about Jews and baseball — the Jewish baseball card set released in conjunction with the exhibit is the eighth such set to appear in the past dozen years; another set featured the Israel Baseball League.

Last year’s 65-game suspension of Braun, a slugging outfielder for the Milwaukee Brewers, for using performance-enhancing steroids has tarnished his sheen for many Jewish fans. To its credit, the museum mentions Braun’s suspension in its Jewish baseball timeline. “To avoid Braun would have been a glaring omission and a lost opportunity for discussion and education,” Perelman said. “Still, it’s worth noting that while many in the Jewish community wrung their hands in anticipation of an anti-Semitic backlash, Braun’s infractions, not his Jewishness, are what made headlines, perhaps suggesting the level to which Jews have become normalized in baseball and society.”

This exhibit, which will tour nationally after it finishes its run in Philadelphia, is by far the largest one ever assembled on the subject. Beyond the usual suspects like Greenberg and Koufax, many other players are represented, such as journeyman catcher Moe Berg, whose claim to fame is as a World War II-era spy who gathered intelligence for the Office of Strategic Services, the precursor to the CIA. A plaque informs visitors about Thelma “Tiby” Eisen, a star in the All-American Girls Professional Baseball League (the league was the model for the 1992 movie “A League of Their Own”) — and a uniform worn by Justine Siegal, who in 2011 became the first woman to pitch batting practice to Major League batters when she threw to her hometown Cleveland Indians.

With the help of official Major League Baseball historian (and DP camp survivor) John Thorn, who served as a consultant for the exhibit, “Chasing Dreams” employs some intriguing methods to help fans learn more about the national pastime. There’s a college-basketball-like bracket pitting players against each other (Koufax comes out the winner, topping Greenberg because, according to the exhibit, he couldn’t hit Koufax’s curve) and an electronic database of Jewish baseball cards where visitors can create their own all-time Jewish baseball team. For kids, there’s an interactive computer game in which they can catch “balls” and a mound where visitors can imitate Koufax’s motion and try on a replica Koufax jersey.

Like most discussions of Jews and baseball, the exhibit makes the irrefutable case that baseball served to Americanize both American Jewish players and players from other immigrant groups. The Jewish experience with baseball did more than act as a field of assimilation: It helped make Americans more comfortable with Jews: Koufax, of course, entered the pantheon of Jewish history when he refused to pitch the first game of the 1965 World Series because it fell on Yom Kippur.

Displayed prominently on the wall at the entrance to the exhibit are the reported words of pitcher Don Drysdale, Koufax’s replacement for the Dodgers that day. As Dodgers manager Walter Alston took the ball from Drysdale in the third inning after he was shelled by the Minnesota Twins, Drysdale allegedly said to Alston, “Skip, I bet you wish I was Jewish, too.”

Peter Ephross, whose work has been published by The New York Times and The Baltimore Sun, is the co-editor of “Jewish Major Leaguers in Their Own Words: Oral Histories of 23 Players” (McFarland, 2012).

Why We’re Living in the Golden Age of Jewish Baseball