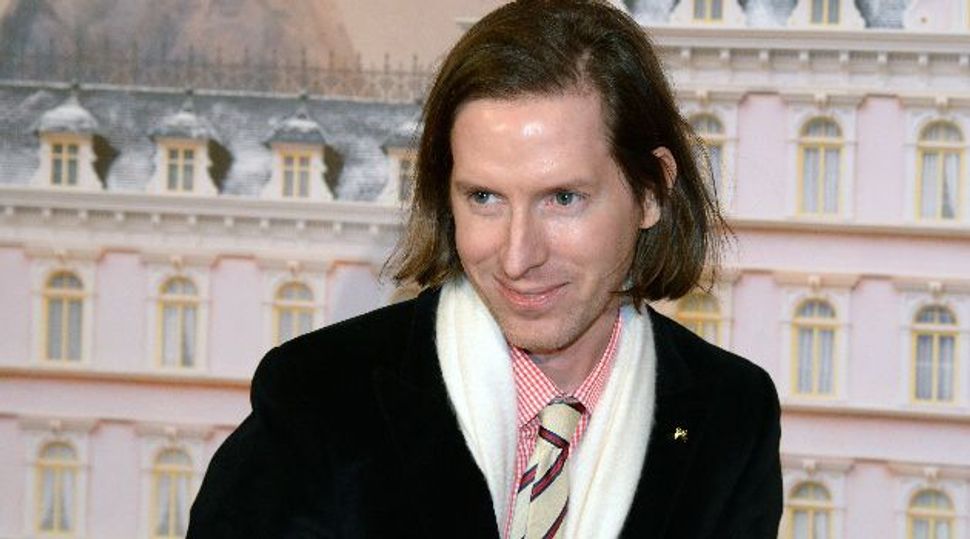 A DIrector Under the Influence: ?My intention was to sort of do our own version of a Zweig story,? Anderson said. Image by Getty Images

An elaborately constructed caper set in a fairy-tale Europe on the eve of World War II, Wes Anderson’s “The Grand Budapest Hotel” is many things: a wild tumble through another of the director’s painstakingly designed imaginary worlds; a gleefully overstuffed ensemble piece with an all-star cast; and a near-perfect combination of sophistication and silliness. It is also a stylistically distinctive homage to a triumvirate of German-speaking Jewish émigré artists: writer Stefan Zweig and filmmakers Ernst Lubitsch and Max Ophüls.

That “Grand Budapest” opened the Berlin Film Festival last month seemed especially piquant since Lubitsch is one of this city’s most beloved cinematic sons. Speaking at the festival, Anderson said the setting of his film was inspired by the Eastern Europe reconstructed on Hollywood back lots, including the Budapest of “The Shop Around the Corner” and the Warsaw of “To Be or Not To Be,” two of Lubitsch’s most celebrated films.

Made in 1940 and 1942 respectively, the films offer two very different views of European capitals during World War II. An urbane comedy of manners that unfolds largely within the confines of a gift store, the foreign flavor of “The Shop Around the Corner” derives mostly from the Mitteleuropa character names, the occasional street sign in Hungarian, and a cigar box that plays “Ochi chyornye.” References to actual political events are conspicuously absent. “To Be or Not To Be” is a dark screwball comedy about a troupe of Polish actors who outsmart the Nazi occupiers. Opening months after the U.S. entry into the war, the film was a commercial flop. Apart from their Eastern European settings, both films share the “the Lubitsch touch,” a graceful style of filmmaking whose level of sophistication never seemed ostentatious; an artful, easy elegance characterized by crisp dialogue, perfect comic timing and visual simplicity.

“If I knew the formula, I would patent it,” Billy Wilder, one of Lubitsch’s protégés, once said of the elder director’s elusive defining quality. “But nobody quite knows how to arrive at it.”

In channeling the Lubitsch touch, Anderson clearly relishes dialogue that comes off as impossibly eloquent and archaic (lines spoken in the film by the characters played by Ralph Fiennes and Jeff Goldblum are the clearest examples of this). The instances of rapid-fire banter also show the screenplay’s debt to Lubitsch’s verbal screwball. And for all Anderson’s usual visual flair (plenty of which is on display here), the more intimate compositions in train cars, crowded kitchens and prison cells (all shot in the “Academy Ratio” of 1.37:1, the standard 35mm screen proportion from 1932 to 1952) suggest Lubitsch’s naturalistic yet dynamic interiors.

“Grand Budapest” presumably takes place in 1932, but the Europe that is on the brink of destruction is clearly pre-World War I, full of aristocratic splendor and suffused with nostalgia for fin-de-siècle luxury and excess. Anderson has evident fun dreaming up Eastern European-sounding place-names. His hotel is in the Republic of Zubrowka (the name of a tasty Polish bison-grass vodka). The heroes disembark for a rendezvous at Gabelmeister (“fork master”) Peak, nested in the Alpine Sudetenwaltz, where people read a daily newspaper called “The Trans-Alpine Yodel.” This spirit of frivolity and make-believe permeates “Grand Budapest” like apricot lacing a sachertorte. Indeed, for the most part this film is as sweet and delicate as the elaborate confections made by Herr Mendel, to name a seemingly minor detail that becomes a major plot element. (Mendel’s shop is a thinly disguised version of Demel’s, the legendary Viennese confectioner that was Billy Wilder’s favorite).

This sugarcoating is not quite what one receives when reading Zweig, whose writing, the closing credits tell us, inspired this film. The Austrian-Jewish novelist, biographer, journalist and playwright left Austria in 1934 and— eight years later — in despair at Europe’s self-destruction, committed suicide together with his wife in exile in Brazil. One of the most translated writers in the Europe of his day, he has been largely neglected in the English-speaking world for the past several decades, although some of his works have been republished in English in the past few years. Zweig’s writings, especially his autobiographical ones, are tinged with yearning for a vanished world. Intimately knowledgeable about the uprooted and the lost, he is a poet of exile and nostalgia.

“I think people in Europe are surprised that we don’t know this writer,” Anderson explained. “They all know him. In France, certainly in Germany, he’s enormously popular. And I read this book ‘Beware of Pity.’ It’s the first one I read a number of years ago and I loved it immediately, from the first page. And I started reading all his fiction and his wonderful memoir, ‘The World of Yesterday.’ Our story is not based on any of his stories but… my intention was to sort of do our own version of a Zweig story,” he continued.

Redolent with thirst for lost grandeur — hammered home by the contrast between the hotel’s opulence in the 1930s and its drab social-realist-like appearance in the 1960s — “Grand Budapest” also borrows structural elements from Zweig. The layers of narrative framing — we enter into a book where an aging writer is telling us about a story he heard many years ago — is reminiscent of Zweig’s slightly old-fashioned way of getting into a story. In addition, the film’s opening monologue is virtually a paraphrase of the opening pages of “Beware of Pity.” Anderson has even collaborated with the Pushkin Press on an upcoming collection of Zweig stories that inspired the film. The volume is called “The Society of the Crossed Keys,” a reference to the elite network of hotel concierges that is summoned in one of the film’s most elaborate and memorable sequences.

Linking Zweig and Lubitsch with Anderson is the German auteur Max Ophüls, a consummate cinematic stylist with a penchant for conjuring 1900 Vienna (most notably in his lavish adaptations of Arthur Schnitzler plays, “Liebelei” and “La Ronde”) and for elaborate, gliding camera movements. Ophüls also filmed what is perhaps the most famous of Zweig adaptations, “Letter from an Unknown Woman,” from 1948 and starring Joan Fontaine.

In general, Anderson’s highly choreographed visual aesthetic is much closer to Ophüls — also a great influence on Kubrick — than to Lubitsch. Yet in “Grand Budapest,” he manages to fuse Ophüls’s operatic sweep with Lubitsch’s light touch and effervescent wit.

Anderson’s detractors claim that he is too fussily obsessed with detail and that his films are hopelessly detached from reality. “Grand Budapest,” with its carefully orchestrated whimsy, is not likely to win him new converts. However, the tribute he pays his inspirations with this remarkably firm and confident vision seems sincere and adds an emotional depth that is at times lacking from his other work.

The impossibly glamorous Europe of “Grand Budapest” — half Lubitsch, half Zweig but wholly Anderson — is no doubt a fabrication. But to quote from the screenplay, the film “sustains the illusion with a marvelous grace.”