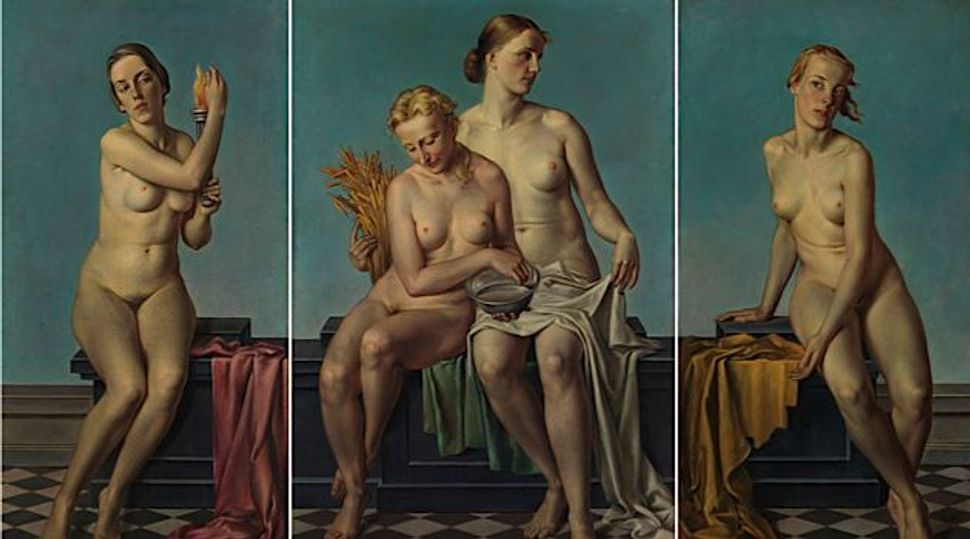 A Master of Sorts: Adolf Ziegler’s triptych ‘The Four Elements’ used to hang above Adolf Hitler’s mantel. Image by Courtesy of the neue galerie

When I looked for the first time at the painting that used to hang above Adolf Hitler’s mantel, I felt weirdly emotionless.

It’s a triptych called “The Four Elements,” painted by Adolf Ziegler, and it displays four fair-haired naked women representing fire, water, soil and air. It can currently be viewed in New York City, at the Neue Galerie, as part of the exhibition “Degenerate Art: The Attack on Modern Art in Nazi Germany, 1937.”

The painting is mediocre but not appalling; it is simple in symbolism and composition. The person next to me looking at it shuddered; perhaps she was trying to imagine what Hitler might have thought while looking at it. I tried, too, but in vain. There was no disgust or anger swelling inside me. Instead of trying to get into the head of the Jews’ archenemy I listened to the audio guide. It informed me that Ziegler, who was charged with confiscating what the Nazis considered “degenerate” art and with organizing the 1937 exhibition in Munich, had been nicknamed “the master of German pubic hair.” I chuckled, and hoped that nobody heard me.

I continued to wander through the exhibit, waiting for the arrival of emotions I deemed appropriate for the occasion. After all, this was the first time I had seen even a partial reconstruction of this infamously humiliating exhibition.

The mock art exhibit was first held in Munich in 1937 and showed the works of 112 artists that the Nazis deemed “degenerate” because their work didn’t fit the Third Reich’s ideology. Among them were many artists who today are deemed highly influential, such as Paul Klee (too childlike and primitive in appearance), Ernst Ludwig Kirchner (too Expressionist) and Max Beckmann (too Bolshevik).

The show at the Neue Galerie features a relatively small number of the 650 works that were displayed at the original exhibition as well as additional works by the artists deemed “degenerate,” such as those of the Bauhaus movement. The curator, German art historian Olaf Peters, uses one room to contrast these works with art the Nazis found desirable — such as Ziegler’s triptych, and the sculpture of a naked, male athlete by Richard Scheibe.

The show’s enormous popularity — the line outside the museum stretched several meters on a sunny weekend afternoon — unintentionally helps to mimic the original conditions. The exhibit in Munich was held at the cramped confines of the Institute of Archeology, in the Hofgarten, and the Nazis claimed that 2 million people visited the show, which was free of charge, in the first six months. As American filmmaker Julien Bryan’s footage of the Munich exhibit shows, visitors to Hofgarten sometimes had to crane their necks to view the artwork, as they did at the Neue Galerie.

The current exhibition provides a sense of the scope of the Nazis’ rampage against so-called “degenerate” art, and its consequences on the artists (Kirchner committed suicide; Beckmann went into exile; Emil Nolde was prohibited from painting, so he moved to use watercolors because, being odorless, they were easier to hide) and the art world (in the form of confiscation, looting and destruction). But what made me realize the heinousness of the Nazis’ project on an emotional level — and finally got me angry — was Bryan’s video footage.

I first tried to discern the visitors’ emotions from their faces. They looked surprisingly blasé to me. Were they thinking, “This artwork is so un-German”? or, “I secretly like what I see”? Looking at the video again, I spotted the comments the 1937 organizers had added in German next to the artwork, one of which was, “They had four years time.” Next to a painting by Wassily Kandinsky, it read, “Paid for by taxpayers money.” And at the entrance of the current New York exhibit, a German poster advertising the show in Hamburg in 1938 read, “What we see in this interesting show was once taken seriously!!!”

In combination with the uninvolved facial expressions and the outstanding artwork on display at the Neue Galerie next to the one-dimensional Nazi art, the mocking comments were what made the mock exhibit come to life. I felt deep outrage about the fate of the highly talented, intensely humiliated artists. Going back to the boring art that replaced their work, I still didn’t want to think about how I was supposed to feel when looking at Nazi art, though I did sort of want to create a mock exhibition of my own — perhaps by decorating the naked women on Ziegler’s triptych with a toothbrush mustache.

Anna Goldenberg is the Forward’s arts and culture intern. Her work has been published in Die Zeit, among other periodicals.