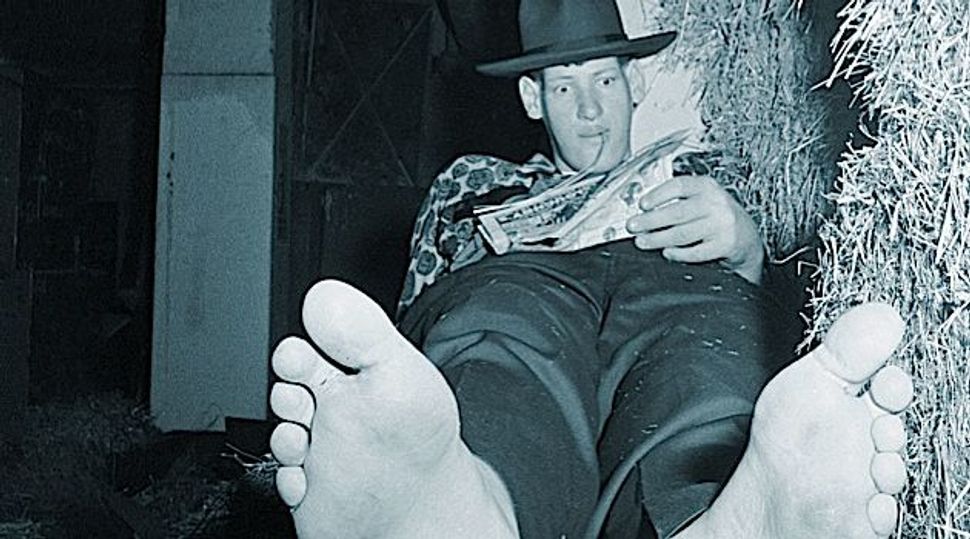 Diane Arbus’s “Jewish Giant,” the second installment in the Jewish Museum’s innovative Masterpieces & Curiosities series, is an entire show dedicated to interrogating the competing meanings contained within a single photograph by Diane Arbus.

The photo itself, “A Jewish Giant at Home with His Parents in the Bronx, N.Y, 1970,” is mounted in a vitrine in the middle of the gallery, and it’s a remarkable work of art.

The first thing you notice is the giant himself, looming over the elderly couple in front of him. He’s not just huge — he’s grotesque in other ways too. Hunchbacked. Clubfooted. His shadow floats behind him like a dark aura. He’s unshaven, in need of a haircut, and his shirt looks like it hasn’t been ironed in years. If he weren’t so large you’d think he was a hobo, a grafter, a thief in the night. His head twists forward as though he’s too big for the room — or is he lurching, leering, using his size to intimidate?

The next thing you notice is the old couple standing before him. The stocky balding man in his three-piece suit, staring straight ahead as though he can barely endure being made to stand here. The plump woman with frizzy dyed hair, wearing her best shmata, trying to put on a brave face. They are Jewish. That’s obvious from the unfortunate glasses they wear as well as from the furnishings that could only belong to them. The lampshades wrapped in plastic. The drab but tasteful armchair and sofa. The Old World art on the walls. The curtains pulled shut against the world. This is their home. Note the scroll work on the walls, the crack on the ceiling that has been plastered over. A typical prewar apartment in New York City.

And here is this giant, stalking toward them and backing them into a corner.

The composition certainly implies this may be the story. The low angle of the camera gives the room the skewed perspective of a funhouse, the walls shrinking as you go deeper in, and there he is — an intruder, a monster — perched just off center. The only thing protecting the two old Jews on the short side of the frame is the space between them.

But look more closely. Notice how he presses all of his considerable weight into the handle of his cane. Notice the painful bend in his knees. The lift in the sole of his left shoe. Notice how pasty white his arm is. Notice, particularly, the soft, almost pleading openness of his expression, the need it projects. And the woman, his mother — is it possible that the fear on her face comes not from intimidation but from the burden of a Jewish mother’s devotion, from seeing her great hulk of a boy breaking down and growing feeble before her eyes?

Maybe we’ve misunderstood the meaning of the image. Maybe this photo is not about monsters. Maybe it’s about love. Maybe, as the title implies, it’s about Judaism. Might the woman in the photo not be wondering who will protect her son from the ravages the world may inflict on him because of the conspicuous difference embedded in his body, a difference that can’t be assimilated away?

Instead of building a narrative around an existing collection of art objects, as most museum exhibitions do, “Diane Arbus’s Jewish Giant,” curated by Daniel S. Palmer, has compiled artifacts and art works in an axis around this central image to explicate its themes.

On the wall behind the Arbus photograph, we see a largeblowup of an earlier family portrait of the giant, Eddie Carmel, and his parents. Here, he sits between them, the angelic yeshiva boy, not so big at all, on the same couch he towers over in the Arbus photo. Accompanying this photo is a shelf of snapshots of Carmel and his extended family living what looks to be a typical and happy life in the Bronx of the 1940s.

We’re asked to see him as a child of this heavily Jewish environment (one he never really left), and to notice that, contrary to our expectations, his gigantism didn’t define his childhood. He was born in Tel Aviv, and immigrated with his parents to the United States when he was a small child. Until he was 15, at which point acromegaly, the hormonal condition that caused his gigantism, began to take effect, his life was not different from that of thousands of other boys growing up in the Jewish regions of the Bronx. And yet, we know that all this will change. He’ll grow and grow. There will be no hiding. His massive body will come to define his life. It’s hard not to think about the other boys growing up in his neighborhood and those other Jewish enclaves around New York City, hard not to think about the ways they hid their heritage, the way they took pride in it, the way it affected so many of their choices and opportunities in life. Carmel and the Arbus photograph, the exhibition suggests, may be viewed as metaphors for the limits of assimilation.

Across the room is a collection of carny memorabilia and documentation from Carmel’s time working at Hubert’s Dime Museum and Flea Circus in Times Square. It includes a photo of Albert-Alberta, the gender twisting performer whose shtick involved presenting himself as half man-half woman, taken by Lisette Model, Arbus’s mentor; a publicity shot of Carmel stretched back on a bale of hay, his massive feet jutting out toward the camera; one of the lucky horseshoe rings he sold at his shows; a novelty record called “The Happy Giant,” that he made in the early ’60s; and most touchingly, his size 24 shoes, the very ones he wore in the Arbus photo, making tangible the wear of his lumbering days, and — with their bulbous distortions and the lift built in to the right sole — the pain he must have endured as the effects of acromegaly began to break his body down.

We’re asked to imagine the strategies he employed to survive. There came a point in his early life when he became conspicuous and freakishly visible; like so many Jews before him, he chose to perform his difference from the world. The freak show gave him shelter. It allowed him to control the terms of his celebrity and, like a vaudeville and Borscht Belt comedian, to exploit the discomfort others felt around him.

In another corner, we see a series of drawings and lithographs from the Jewish Museum collection. They depict Goliath standing proud, his hands raised in a show of strength; David walking through the throngs, dragging the giant’s head behind him; a lonely, shrouded golem staring hawkishly out of darkness. These images face off against two vitrines, one packed full of Andre the Giant dolls and stickers, the other with Incredible Hulk action figures. These are the monsters of our past and the monsters of our present — benign, protective, famously weak (Goliath), and sensitive (the cuddly Andre) despite their size, both Jewish and not. Bridging the gap, a poster of Carmel on view claims he’s over 9 feet tall and 470 pounds. In interviews, we’re told, Eddie Carmel claimed he was a descendant of Goliath. And in some ways he was, though in others he wasn’t. The show represents the lineage of difference as a call to destiny.

Taken together, the exhibit becomes a kind of postmodern essay on identity, a fascinating meditation in footnotes that allows the viewer to make associations that complicate and expand rather than delimit and flatten the meaning of the photo. At each point along the way it asks you to return and study the image again.

“Masterpieces & Curiosities: Diane Arbus’s Jewish Giant” is on view at the Jewish Museum until August 3.