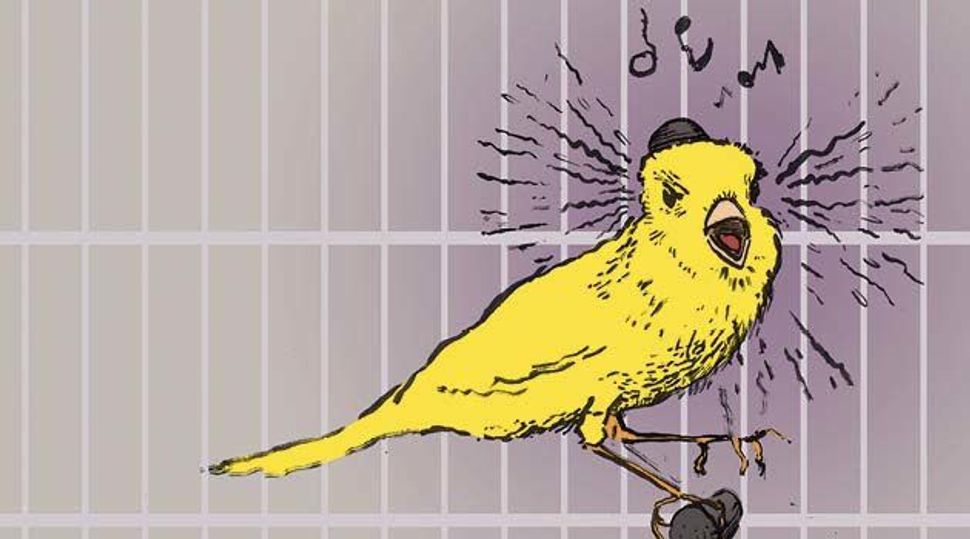 “I was raised in Brooklyn with the knowledge that spitting three times (or at least making a ritualized spitting movement or sound, which I’ve always rendered as ‘ptu, ptu, ptu’) is an effective way of warding off a kinehore — or ‘canary’ in my native Yinglish. My mother especially used it when sewing something while I was still wearing it, with remarks like, ‘Oy, azoy sheyn, kinehore, ptu, ptu, ptu.’ What is the derivation of this?”

Although Mr. Hoffman’s mother undoubtedly did what he remembers, he needs to be corrected about one thing. You don’t “ward off a kinehore” (pronounced “kinnahora”), which is a contraction of Yiddish kayn, “none” or “no,” and Hebrew ayin hara, “the evil eye.” Rather, you say “kayn ayin horeh,” “k’nayin horeh” or kinehore — that is, “no evil eye” — in order to ward off the jinx, hex or bad luck that the evil eye is believed capable of causing. And since, in the traditional superstitions of Jews and countless other peoples, the evil eye is most dangerous when you have provoked its jealousy by boasting of your (or someone else’s) successes or flaunting your (or someone else’s) good fortune, saying kinehore is most imperative at such moments. Thus, “My grandson, kinehore, brought home a perfect report card last week”; “Kinehore, she’s the most beautiful little baby”; “The doctor, kinehore, says I have the heart of a young man,” etc.

“Ptu, ptu, ptu,” or “tfu, tfu, tfu” or “poo, poo, poo” — all simulated spittings, as Mr. Hoffman correctly observes — generally take the place of kinehore and are not, as a rule, uttered together with it except for special emphasis. Why Mr. Hoffman’s mother felt the need to be so emphatic when sewing a shirt or pants that were on him, I don’t know. Perhaps she was afraid that calling either him or his clothing azoy sheyn, “so handsome,” might cause her to jab him with her needle. The evil eye’s bag of tricks is inexhaustible.

I also don’t know why spitting against the evil eye — and very commonly, three times — has been universally thought, in culture after culture all over the world, to be so efficacious. However, this puts me in good company, because it’s something nobody really knows. In his classic study “The Evil Eye” (1895), the philologist Frederick Thomas Elworthy gives numerous examples of the custom, ranging from Greek and Roman antiquity to contemporary England, without satisfactorily managing to explain it. The Romans, he points out, even had a special phrase for it: despuere malum, “to spit at evil.” The Latin poet Tibullus, for example, has a poem in which he describes asking a sorcerer to cast a spell on his mistress’s husband to keep him from knowing about their trysts. “Haec mihi composuit cantus, quis fallere posses,” he writes to his mistress. “Ter cane, ter dictis despue carminibus.” In English this would be: “She gave me this charm for you to fool him. Chant it three times and spit three times when the song is done.”

Referring to the dialect of his own native county of Somerset, Elworthy wrote: “It is quite commonly said here, “Nif [if] you do meet wi’ anybody wi’ a north [that is, evil] eye, spat dree times.” And he cites a case that occurred in London when he was a child, in which a woman with a squint — a facial expression often associated in folklore with the evil eye — took another woman, who lived in the same boarding house, to court for repeatedly spitting in her face. In her defense, the accused claimed that spitting three times in the plaintiff’s face thrice daily was her only way of protecting herself.

The morphing mentioned by Mr. Hoffman of kinehore into English “canary,” as in a phrase like “Don’t give me the canary,” did not persist past the children and perhaps grandchildren of Yiddish-speaking immigrants to the United States and is rarely heard anymore. Yet such a phrase indicates that Mr. Hoffman was not alone as a child in mistakenly thinking that a kinehore was a jinx brought about by the evil eye rather than a formula for preventing it. Indeed, the confusion seems to have gone even further, for the only dictionary in which I have been able to find “canary” as an Anglicization of kinehore, Howard Wentworth and Stuart Berg Flexner’s Dictionary of American Slang (1960), defines the word as meaning “a compliment; praise; critical acclaim.” This isn’t so strange. considering that compliments, praise and acclaim are what attract the evil eye’s attention in the first place, but I wonder whether Wentworth and Flexner actually heard “canary” used in this sense by informants or whether they falsely deduced such a meaning from what they actually did hear or read. Do any of you old-timers out there remember “canary” being used in this way?