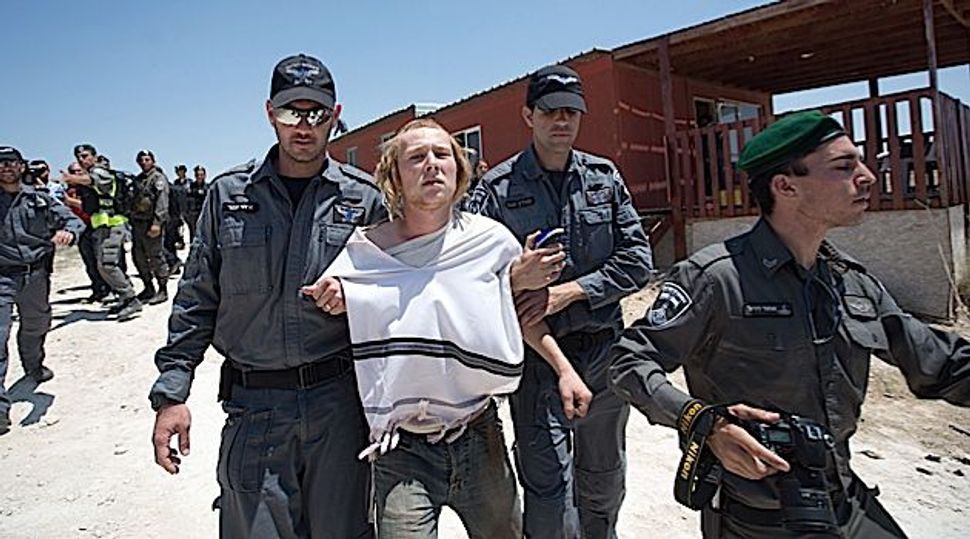 Amos Oz, probably the most widely acclaimed of all living Israeli authors, has been both criticized and defended for saying several weeks ago that Jewish settlers in Judea and Samaria engaged in acts of violence and vandalism toward Arabs were “a monster that needs to be called what it is: Hebrew neo-Nazi groups.”

Not all of Oz’s critics were on the side of the settlers; some simply thought that Oz should have been more careful with his language. Writing in the Hebrew daily Haaretz, for example, the paper’s left-leaning literary editor, Benny Ziffer, declared, “There’s nothing cheaper than using a phrase with the word ‘Nazi’ to describe someone we want to badmouth.” American Reform movement leader Eric Yoffie, hardly pro-settler, wrote: “I groaned when I read the Israeli author’s words…. The settlers are right that analogies of this type are to be avoided and that such language devalues the searing, unique evil of Nazism.” And in Tablet magazine, Liel Leibovitz, also no friend of Israeli settlement activity, said:

“It’s a silly comparison…. Adhering to some strict permutation… the Israel Prize laureate seems to be telling us that an action is an action, intents and purposes be damned. Believe that, and you believe that the skin-headed thug from Austria and the yarmulked man from Samaria are both indistinguishable occupants of a category populated by vandals, a category that also includes the French youth who smashed Peugeots outside of Paris in 2005, the mob who went haywire in London in 2013, and every soccer hooligan who has ever expressed his allegiance to his team by leaving the stadium with a lighter in hand.”

Blogging for the Forward, on the other hand, Sigal Samuel criticized Leibovitz’s criticism. “He talks about [the settlers involved],” she wrote, “like they’re naughty teenagers, guilty of nothing more than a bit of vandalism — childish maybe, hurtful maybe, worthy of a slap on the wrist maybe, but nothing requiring that we ‘really be worried.’”

Later in the blog, she stated: “Violent settlers may not be [as Leibovitz pointed out] aiming for ‘the systematic murder of millions of human beings,’ but I’d argue their intentions aren’t all that dissimilar from those of neo-Nazis.”

And yet most of the so-called “neo-Nazis” of Europe aren’t aiming for the systematic murder of millions of human beings, either. The problem isn’t so much Oz’s use of the word “neo-Nazi” as it is the word itself.

“Nazi,” one might remember, was originally short for the German Nazional-Sozialist, “national socialist.” A political party that was both anti-capitalist and fiercely nationalistic, one that wished to disassociate itself from the internationalism of communism and European socialism, took the name. Its ideology also included a rejection of democratic institutions, a cult of the leader, a call for social regimentation and discipline, a glorification of armed forces and war, a belief in racial differences between peoples and in German and “Aryan” superiority, a romantic worship of nature, hostility toward Christianity and an exterminationist attitude toward Jews. Italian fascism and other right-wing European parties shared some of these features but not others. Although the Nazis had large numbers of sympathizers outside Germany, Nazism was a distinctly German phenomenon.

Thus, whatever “neo-Nazi” may mean today, it rarely refers to a latter-day proponent of Nazi ideology. It is frequently used to designate not only, as Leibovitz points out, a wide variety of antisocial hooligans with a penchant for xenophobic violence, but also a spectrum of European political parties like Austria’s Freedom Party, Greece’s Golden Dawn, Hungary’s Jobbik and France’s National Front. All these groups are militantly nationalistic, anti-minority and anti-immigrant, yet all diverge on other issues and sometimes have no coherent approach to such issues at all. Most bear a greater ideological resemblance to right-wing movements in Europe between the two world wars — such as Poland’s National Democratic Party, Hungary’s Arrow Cross and Romania’s Iron Guard — than they do to Hitler’s Nazis. And for all the many differences, it makes more sense to compare the anti-Palestinian rampages of the “hilltop youth” of Judea and Samaria to the anti-Semitic violence of the Polish National Democrats or the Endecjas of the 1930s than to that of the Hitlerjugend or the German Brown Shirts.

I agree with Ziffer, Yoffie and Leibovitz. “Neo-Nazi” is not a useful term in this or most other contexts. When we speak of “neoliberals” or “neoconservatives,” we are talking about groups that are seriously seeking to adapt classical liberal or conservative philosophies to contemporary conditions. No one in Europe or America today, apart from a few fringe lunatic groups, is out to do the same with Nazism. “Nazi” is a word that gets thrown around a lot because it is one of the strongest terms of opprobrium we can think of — stronger than “racist hooligans,” “hate-filled hoodlums,” “xenophobic thugs” or other expressions than can quite justifiably be used for a small but dangerous number of Israeli settlers in the occupied territories. That doesn’t, however, make it appropriate, certainly not for a writer like Amos Oz, who can be expected to use words with precision.