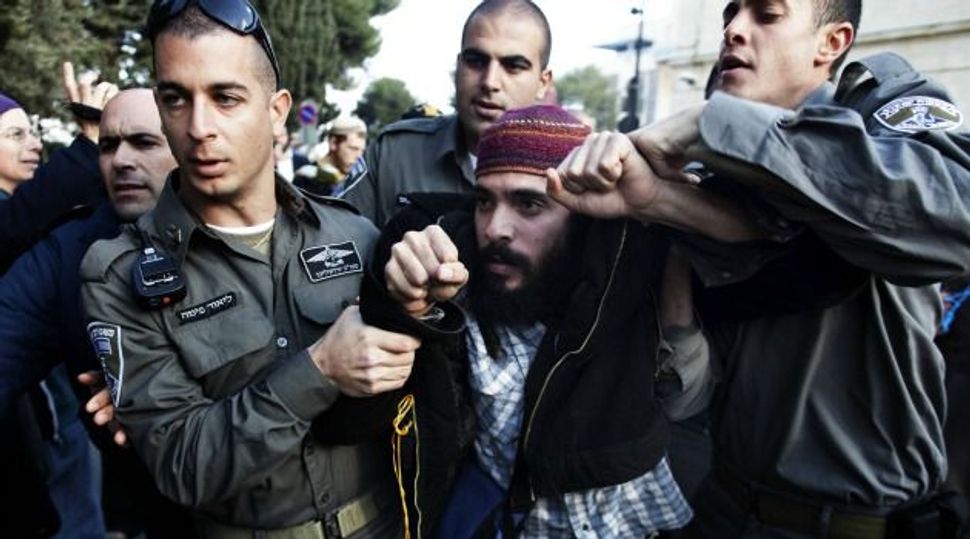 Over at Tablet, Liel Leibovitz is unhappy that Israeli author Amos Oz is going around calling violent Israeli settlers “Hebrew neo-Nazis.” He claims Oz’s statement suffers from “a logical flaw,” one that has “more to do with philosophy than with politics.” And yet, for all that Leibovitz likes to namedrop Kant, it’s his argument that doesn’t stand up to logical scrutiny.

In case you missed it, here’s what Oz had to say on Friday:

“‘Price tag’ and ‘hilltop youth’ are sweet, sugary nicknames, and the time has come to call this monster by its name. We wanted to be like all other nations, we longed for there to be a Hebrew thief and a Hebrew prostitute — and there are Hebrew neo-Nazi groups.”

And here’s the follow-up explanation Oz offered on Sunday:

Leibovitz isn’t satisfied with this explanation, because he doesn’t like what he takes to be Oz’s tacit assumption: that “an action is an action, intents and purposes be damned.” Surely, he argues, it matters that in the case of the “rowdy” Israeli settlers “whose particular form of teenaged ennui sometimes involves defacing mosques with hurtful graffiti, torching cars, and other acts of baboonery,” we’re dealing with an intent that is vastly different from that of the neo-Nazis, whose purpose is “the reinstatement of a regime responsible for the systematic murder of millions of human beings based on no other reason save for their religion, ethnicity, sexual orientation, or political views.”

First, Leibovitz grossly mischaracterizes Israel’s “hilltop youth” — by describing them in exactly the same “sweet, sugary” terms that Oz was trying to warn against. He talks about them like they’re naughty teenagers, guilty of nothing more than a bit of vandalism — childish maybe, hurtful maybe, worthy of a slap on the wrist maybe, but nothing requiring that we “really be worried.” What he ignores is that these settlers are increasingly engaging in what can only truly be called terrorism.

Take, for example, a bout of settler violence that took place just this weekend:

Coordinator of the Popular Committee against the Wall and Settlements south of Hebron Rateb al-Jubour said in a statement that settlers took 6-year-old Mosab Kamel Mousa Robai from the village of Tuwani east of Yatta.

Al-Jubour added that the child was in “difficult” and deteriorating health conditions when he was released and was unable to speak.

He was subsequently transferred to Abu al-Hasan al-Qasim Hospital in Yatta for treatment.

Dig a little deeper — just deep enough to ask what could possibly have motivated these settlers to kidnap a pint-sized kid — and you start to see the second flaw in Leibovitz’s argument. Because what, if not “religion, ethnicity and political views,” does Leibovitz think these settlers sought to punish when they kidnapped a six-year-old member of a Palestinian family? Violent settlers may not be aiming for “the systematic murder of millions of human beings,” but I’d argue their intentions aren’t all that dissimilar from those of neo-Nazis.

Finally, Leibovitz complains that unlike the late Israeli philosopher Yeshayahu Leibowitz, who issued similar but more sophisticated warnings about Israel’s occupation lending itself to comparisons with Nazi Germany, Oz has made a statement that is “designed not to start a conversation but to end one.”

Yes, that’s true enough. But guess what? Oz knows it. That’s actually kind of his point. In his Sunday interview, Oz said flat-out that he made the comment specifically in order to “shock.” His goal was to jolt Israelis out of their comfortable complacency so that they might actually do something about this disturbing trend.

You can argue that Oz’s strategy was ultimately counterproductive. And hey, I might even agree: clearly, some people just can’t be jolted. But that’s not the same as taking apart the substance of Oz’s argument on the basis of its logical merit.

Leibovitz doesn’t do that. And, as if to make clear to us why, he ends his argument by spelling out his goal: to allow Tablet’s readers to “take comfort in knowing that even the most culpable of Israel’s ideological outlaws are still a long way from Sieg Heil.”

I guess that’s all well and good, if you think that “taking comfort” is the appropriate response when faced with the kidnapping of a six-year-old boy. Me, I’ll hold on to my discomfort, thanks.