Zayd Dohrn’s ‘Muckrakers’ Is Ripped From His Radical Royalty Bloodline 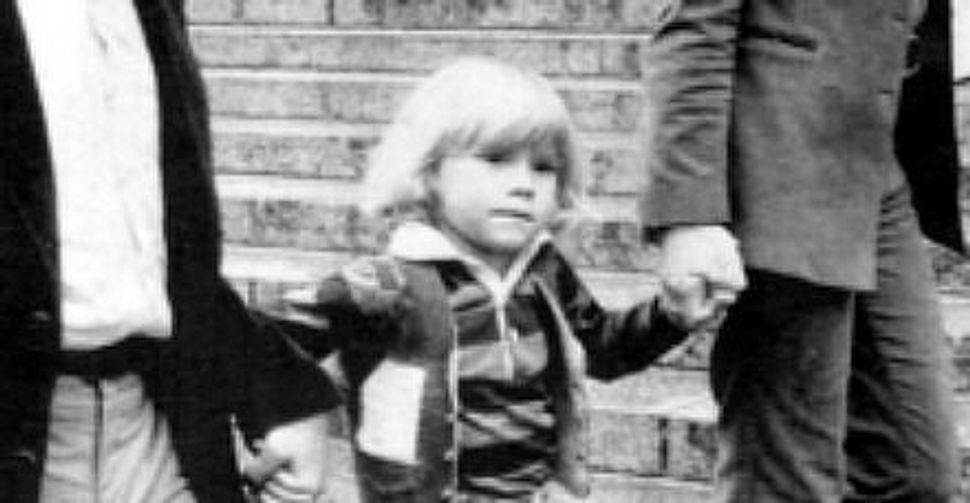 Zayd Dohrn’s ripped-from-the-headlines “Muckrakers” is a drama about transparency in the digital age that asks: When does disclosure of the public and personal become too much openness?

“Muckrakers” has more twists and turns than a windy seaside road, as renowned British Internet free speech activist Stephen (Darren Keefe) spends the night with anarchistic blogger Mira (Erica Bitton) after a New York speech. All hell breaks loose as the WikiLeaker-type character is out-WikiLeaked in this thought-provoking piece, which is currently having its West Coast premiere.

The playwright’s family has an intimate connection to electronic surveillance. In the 1970s, Zayd Dohrn’s mother Bernardine Dohrn was on the FBI’s 10 Most Wanted list — along with his father, Bill Ayers, she belonged to the Weather Underground, a group of New Left militants who carried out armed struggle against Washington.

In 2008, they were the so-called “domestic terrorists” who vice presidential candidate Sarah Palin accused Barack Obama of “palling around with.” Zayd Dohrn was born in 1977, and then grew up, underground in New York. The dramatist is also a playwriting and screenwriting professor at Northwestern University.

Dohrn, who is arguably the son of a first family of America’s far left, works with a stage outlet that has a lofty lefty lineage, as well as an exalted dramatic pedigree and Jewish roots. “Muckrakers” is being presented in L.A. by the Harold Clurman Laboratory Theater Company at the Art of Acting Studio, the West Coast branch of Manhattan’s Stella Adler Studio of Acting.

Dohrn is tall, lean, casually dressed, friendly. During a candid conversation at a Westwood hotel, the playwright opened up about being Jewish, whistleblowers, playwriting, Sarah Palin, Deep Throat, and growing up Dohrn.

Ed Rampell: In what way are you Jewish?

Zayd Dohrn: My mom is Jewish and raised us as secular Jews. I always considered myself to be Jewish. Her dad changed Ornstein to Dohrn — he took “D” from my grandmother Dorothy’s name and added it to his name. It was a kind of Ellis Island name change.

Assimilate? Yeah. But my mom was the next generation, that was interested in rediscovering cultural roots, not in assimilating. But she wanted to remain true to that part of her heritage, so we grew up celebrating Passover, Hanukkah — especially Passover, of course, because the inherent politics of it were important to my family. I was kind of bar mitzvah-ed — not a traditional one, given my family. I had what we called a “coming of age” ceremony, with some bar mitzvah traditions and some traditions taken from Native American culture. We designed our own ceremony. [Being Jewish] was not part of [Bernardine Dohrn’s] public image; it was just something we did privately. [Bill Ayers] is a WASP; his father, Thomas Ayers, was of German and Hungarian descent. My dad jokes that in the civil rights movement, so many of their comrades and friends were Jews that the Jewish culture was a big part of it and he felt that he was assimilating into Jewish culture. My wife is Jewish. We have two daughters. We’re raising them not religiously but culturally; we celebrate Passover, Hanukkah. We eat Jewish food, tell Jewish jokes. We don’t go to synagogue or send them to Hebrew school. But we’d like them to think of themselves in the tradition culturally.

How do you see yourself as being a link in Judaism’s chain?

I’d like to be considered in the tradition of great Jewish writers, political thinkers, satirists and comedians.

The people who shaped my imagination as a writer — Woody Allen, Phillip Roth, Chicago activist Fred Klonsky, the great attorney Bill Kunstler, Leonard Boudin, who is my adopted brother’s father and constitutional attorney.

What are your views on the Palestinian issue?

It’s such a big and complicated issue. My central guiding feeling is that Palestinians are an occupied people and need to have nationhood and both peoples will be better off when there’s a solution to this problem. As a Jew I feel I’m part of the Jewish tradition of civil rights struggles, freedom struggles, anti-apartheid struggles, and there has to be a solution that acknowledges the dignity and humanity of Palestinians..

Tell us about your new play.

“Muckrakers” is about journalism, transparency and privacy in the 21st century. Sort of inspired by Julian Assange and WikiLeaks, but I was interested when I wrote it in what the legacy of the WikiLeaks scandal was going to be. Sure enough, by the time it premiered in the Berkshires last summer the premiere coincided to the week with Edward Snowden’s revelations about NSA wiretapping. In a funny way I was writing about what I thought was happening with Assange and WikiLeaks and it turned out to be about what has come since: The Anonymous hacking collective, Edward Snowden, NSA wiretaps — it’s all about that kind of issue, privacy, snooping, surveillance.

You see: You do “need a weatherman to know which way the wind blows.”

Right. That’s a good point. Funny, I didn’t even mean it to be a play about what was coming; I thought it was a play about that historical moment of Julian Assange and WikiLeaks.

What do you think of Assange? Traitor, hero?

Wow. I’m very sympathetic to the idea that the government needs more oversight. We need to be watching what they’re doing and we don’t have enough access to the programs they’re running without our knowledge. Especially under the Bush administration, but frankly very much under the Obama administration as well; there’s not enough transparency. “Muckrakers” is really about this idea of transparency.

Part of what I was trying to explore is when does too much transparency on either side become too much? It’s a little worrisome when individuals — whether they be Obama or Snowden — take it into their own hands to decide who gets to know what. I prefer, in theory, a democratic engagement where the American people get to decide in a democratic or populist way what the limits of government secrecy look like. In the absence it’s important to have people like Snowden who tell us what we don’t know.

Due to your family history you have an intimate acquaintanceship with illegal electronic surveillance.

That’s very true. We always assumed my whole life our phones were tapped. Actually, my parents, in a way — illegal surveillance served them in the long run in the sense that many of the charges against them were dismissed due to illegal COINTELPRO wiretaps.

Wasn’t the illegal electronic surveillance of your parents carried out by Deep Throat of Watergate fame?

[FBI Associate Director] Mark Felt was in charge of lots of the COINTELPRO wiretaps. It’s an amazing coincidence. One of the things I found when I started writing “Muckrakers” is you start looking into this issue of transparency, electronic wiretaps, and you find strange bedfellows. So here’s Mark Felt, one of the classic all time whistleblowers. At the same time, he’s authorizing these illegal surveillance activities at the FBI. So he’s for a transparency I would not endorse. So it comes around in a funny way.

He was able to topple Nixon — but not the Weatherman.

Ed Rampell is an Los Angeles-based journalist and author.

Zayd Dohrn’s ‘Muckrakers’ Is Ripped From His Radical Royalty Bloodline